Noodles and Company has thrived during the recession as its leadership has worked to refine the concept and position it to strongly appeal to today's consumers. The company does this on a number of fronts, including offering a nicer fast-casual dining experience with real china, silverware and no need for customers to bus their own tables coupled with a menu of fresh, made-to-order noodle and other dishes that range from healthy to indulgent, and from spicy to comforting. 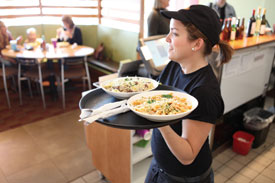 In particular, Noodles has put a sharp focus on culinary innovation, says Jill Preston, director of corporate communications. For example, when the recession hit Noodles added comforting home-style spaghetti and meatballs. Last fall, it introduced a new line of sandwiches. "It reinforces our position that we're not just Asian, Italian or noodles," she says. "We're flavors from around the world. Sandwiches are another way for us to offer that and drive new guests to our restaurants." The sandwich line features a Wisconsin Cheesesteak, Spicy Chicken Caesar, MMMeatball and Veggie Med — all developed using existing inventory items.

A recent limited time offer featured creative riffs on Noodle's Wisconsin Mac & Cheese, including Truffle Mac with Baby Portabellas, Bacon Mac & Cheeseburger, and Southwestern Chili Mac. "They did phenomenally well. We're hoping to bring back the promotion next winter," Preston says. Over the past year and a half, Noodles also expanded into home meal replacement with its Square Bowls program of family-style portions. A hit with busy families, for office meetings and team parties, Preston says the program will be built up to develop catering sales going forward.