Currently in a major growth mode, Jersey Mike's opened 50 stores in 2010, projects opening more than 65 locations this year and will hit the 500-site mark by the end of 2011. This is telling for a sub concept that got its start back in 1956 as a humble seaside sandwich store in Point Pleasant, N.J. 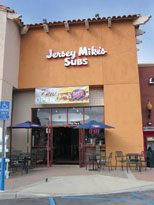 The man behind the expansion is CEO and founder Peter Cancro, who bought the original Jersey Mike's restaurant as a 17-year-old high school student back in 1975. After he began franchising in 1987, growth exploded. There are now Jersey Mike's outlets in 30 states, with more on the way.

"Our goal is to double the number of stores in the next five years," says Hoyt Jones, president. Approximately 5 percent of the stores are company-owned, with the rest franchised. The plan is to eventually increase the corporate site amount to 10 percent.

Jersey Mike's positions itself as an authentic East Coast sub shop with meats and cheeses hand-sliced to order. Each store includes a flat top grill for cooking cheesesteaks, hot pastrami sandwiches and Reubens. Bread is baked on premises daily.

The store décor and ambiance is reminiscent of Point Pleasant on the Jersey Shore. Soft colors and a 1956 postcard mural of the beach are staples at every location. The concept has remained the same for the past 55 years.

Speed of service and customer interaction are key to the concept. Employees are encouraged to connect with everyone coming through the door while assembling sandwiches at the counter.

Although financing has been a challenge the last couple of years, Jersey Mike's has been able to attract franchisees with multi-unit experience and capital. "Many of our franchisees have had previous restaurant and business experience," Jones says. "They are coming in with their own capital and banking relationships or bringing in equity partners. This has helped us maintain our growth [during the down economy]."