Firehouse Subs is hot, posting double-digit revenue and unit increases last year with even bigger gains anticipated this year. Don Fox, chief executive officer, credits the surge in part to loosening of credit markets, which enabled it to open 43 stores last year and 30 as of mid-May this year, with another 50 to 70 to be added by year's end. 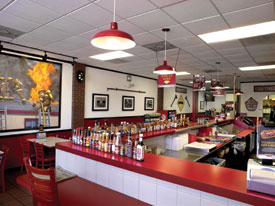 A brighter lending picture isn't the only thing fueling the fire. The chain has made smart moves to differentiate itself and build momentum. Top among them is steaming the meats and cheeses used in its signature hot subs. Each Firehouse kitchen features customized steamers that, in 2 minutes and 45 seconds, gently steam fresh-sliced, pre-portioned meats and cheeses to order. Staff place the fillings on a warm, toasted bun with cool, fresh vegetables and condiments. "Steaming at the point of building the sandwich creates a unique flavor profile and outstanding cheese melt," Fox says.

A radio ad strategy has also helped move the needle. Launched in late 2009, the campaign features the two firefighter founders as spokespeople, doesn't involve discounting, and is all about building brand awareness. It has driven double-digit sales increases in markets where it's used, Fox says.

Looking to build incremental sales and increase the proportion of customer who dine in, Firehouse is among the first chains to begin rolling out a new freestyle beverage dispensing system, currently in its Jacksonville market. "We've seen double-digit gains in traffic since the rollout, with significant increases in both drink incidents and dine-in traffic," Fox says. "It's a win-win."