Extreme Pizza's take-and-bake business was launched in 1994 and didn't take off as anticipated — and after six months company founder Todd Parent was not above tweaking the concept. 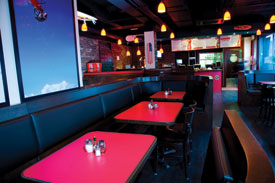 Extreme Pizza ultimately became a fast-casual specialty pizza operator that capitalizes on the newest equipment and technology to stay true to its smaller footprint.

"We started with deck ovens, but there were challenges operationally, so we realized these would not work for us," Parent says. "Our vendor introduced us to conveyor ovens, which improved our speed of service. We also switched from hand-rolling dough to using sheeters, which increased our throughput."

"We launched this larger concept, going with our 'never say never' attitude, after a franchisee in Wilmington, Del., came to us with the idea," Parent says. "It's nice to know this model variation works really well."

Extreme Pizza's concept stemmed from Parent's love of the outdoors and extreme sports. He had an epiphany after visiting France and seeing crepe stands on every corner. "While I knew the U.S. wasn't ready for a crepe revolution, it was my inspiration. There was incredible food at a reasonable price on every corner, and I wanted to bring that back to the states," Parent says.

The menu's 20 signature pizzas each have a subtle story that led to their creation. For example, the popular Pandora's Box Mediterranean-style pie that includes garlic, spinach, sun-dried tomatoes, artichoke hearts and feta, gets its name from both Greek mythology and an epic Colorado ski run.