Energy Kitchen is proof that Americans are getting more serious about their health. Every item on the seven-year-old chain's menu is less than 500 calories. All of its dishes are grilled, baked or steamed. Yes, there are salads, but also burgers, wraps and robust breakfast items. 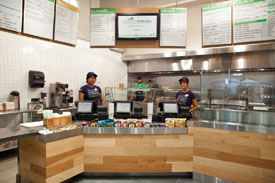 "No concept is doing what we're doing," says Randy Schechter, executive vice president and partner. "We want to take the guesswork out of eating healthy."

The chain was created by its president and CEO Anthony Leone in New York's Chelsea neighborhood. He mentioned the Energy Kitchen idea to long-time friend Schechter, who became an eager investor in the concept.

"I started off as an investor in the first store and worked behind the scenes, while Anthony handled the operations and finance," Schechter says. "When we opened up the next three locations, my role grew." He joined the company full time in 2005.

Partner Mike Repole, a devoted Energy Kitchen customer and the co-founder of Vitamin Water, came on board about three years ago as head of branding and public relations.

The chain now has 10 locations and 80 stores in development. Although rising food costs have been a challenge, Energy Kitchen's substantial growth has provided leverage. "We've been able to negotiate with our vendors and have more buying power [with additional locations]," Schechter says.

Finding appropriate locations also can be difficult. Energy Kitchen's demographic is now mostly 25- to 35-year-old professionals, but that will expand along with its locations to include suburban families with children.

Energy Kitchen's most recent menu addition, baked French fries, may be the clincher for kids. The chain just started testing the product and it has received rave reviews from customers.

"We're trying to change the eating habits of America and are proud of what we've done," Schechter says. "A customer can eat all their meals here for a day and consume as many calories as one fast food lunch."

As Energy Kitchen continues expanding on the East Coast and looks toward the Midwest, Southwest and West Coast, in addition to opportunities overseas, the partners are determined not to lose sight of their original goal. "We will stay true to our concept and focus on serving healthy, great-tasting food," Schechter says.