Dickey's Barbecue Pit is getting bigger in part by going smaller. With the format sights set on becoming the largest barbecue chain in the country (it's already the largest quick-service barbecue chain), Dickey's has kicked off an aggressive expansion drive with a smaller, more streamlined prototype. 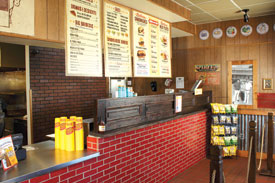 While the format is scalable for conversion of existing larger units, the sweet spot for new units is 1,800 sq. ft. — down from 3,000 to 4,000 sq. ft. In addition, except for a couple of proprietary items, the chain ditched its former specs for new, customized equipment packages that typically ran up to $200,000 in favor of more practical off-the-shelf units, including some used ones. Such changes have brought unit opening costs down to a third of what they were just a couple of years ago, says Daniel Sibly, director of construction.

Sibly describes the new Dickey's as the result of a "perfect storm" of factors. The financial crisis was an obvious catalyst, but at the time the chain was already in the process of reevaluating every aspect of its business with an eye toward gaining efficiencies and cutting costs. "In addition to re-thinking our equipment, we decided to focus in hard on our original simple service model. So all three of these areas — size, equipment and service model — came together beautifully in our new prototype to help us lower costs, be more efficient, serve our guests quicker and let franchisees get in the stores more cheaply. Many can now self-finance and use landlord incentives to greatly off-set their opening costs."

And they're doing just that. Jumping on spaces vacated during the recession by limited service sandwich and coffee chains, Dickey's this year should pass the 200-unit mark —securing its barbecue segment dominance.