Auntie Anne's celebrates the simple pretzel in a wide range of sweet, savory and surprising ways. It's a formula that's given rise to one of the largest fresh, hand-rolled pretzel companies in the world since its founding in 1988 by Anne and Jonas Beiler. 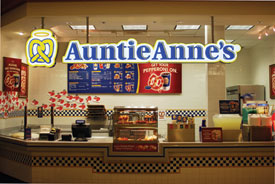 Product innovation has long been part of the company's legacy. Soon after its founding, Anne began coming up with new flavor variations. In the mid-1990s, the chain added R&D and food technology capabilities to its infrastructure, and a collaborative approach to menu innovation has been nurtured using input from franchisees and customers alike, says CEO Bill Dunn.

The existing equipment package has thus far handled the chain's expanding menu, but one big change is in the works. Auntie Anne's is rolling out a new, customized two-tier warming and display cabinet. "It's a real focal point for us. It's now in about 70 stores and is expected to roll out to more soon and will be part of the standard package for new stores. It's proving to be very successful for its merchandising value, the volume of product we can display, and its ability to deliver on product quality," says Dunn.