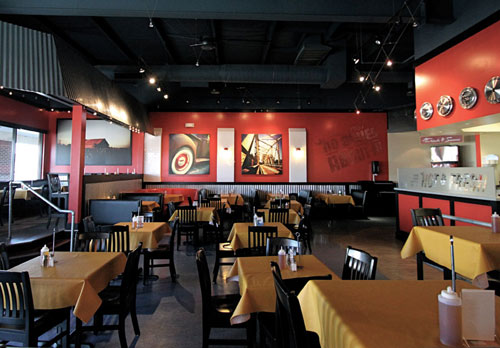 Opened in 1951 at a gas station, Rex's thrived during the 1950s, '60s and '70s, becoming a renowned Oklahoma brand with 200 units. Hard times hit the chain, and it fizzled out in the '70s but was revitalized when David Rutkauskas, president and CEO of Beautiful Brands International (BBI), reestablished Rex's in 2008. Two years later, the first new Rex's opened in Tulsa, Okla., headquarters of BBI, which also owns Camille's Sidewalk Café, a fast-casual sandwich/salad/soup concept, and FreshBerry, a frozen yogurt café, and owns or partners with 13 other concepts. The company has sold 1,500 franchises in the past 10 years in 38 states and 27 countries.

The first—and, to date, only—Rex's is a franchised unit. All future locations will be franchised. "Beautiful Brands specializes in franchising," says Carolyn Archer, BBI's vice president of operations.

The revitalized Rex's features the same menu that made the chain famous in the 1950s: crispy, bite-size chicken, fry bread and fresh side dishes. The company-owned prototype in Tulsa was designed by the Rutkauskases and an architect contracted by BBI. A template was developed so franchisees can select their own architects, who must follow the template, draw up a plan that meets city codes, and obtain a building permit. The interior design and kitchen layout developed by the Rutkauskases will be adopted by the franchisees; the kitchen equipment has been selected. Edward Don & Co. will serve as the chain's dealership.

"Our point of differentiation is about packaging a unique product," Archer says. "What makes Rex's stand out is that the brand image is apparent the moment you walk in the door. It feels beautiful with the deep red walls, which is different than the white and beiges of the old Rex's. The red fabric and black vinyl booths and black wood chairs give a clean, cohesive look, which is relaxing and inviting. We want guests to feel the design wasn't an afterthought, but rather an integral part of the brand.

"Efficiency is key for us," Archer continues. "One of the things that makes our process so fast is we separated the back of house from the front of house like a full-service restaurant. There are distinct areas where staff have different responsibilities, so we don't do a lot of cross-training for the front and back of house. For example, in the kitchen, some staff concentrate just on chicken and getting it right every time. They don't worry about plating, presentation and expediting orders, which is done by staff trained in those tasks. It makes training a little more challenging, but the system is more efficient for throughput and getting orders out quickly."

Food deliveries come in through the back door of the restaurant. Staff place the food into dry storage to the right of the entrance or a walk-in refrigerator with a freezer, which sits on the right side at the end of a pathway that leads through the warewashing area. The kitchen area measures 800 square feet, or 26 percent of the total restaurant footprint.

In front of the storage areas, staff make the restaurant's signature fry bread using a floor mixer and a maple table for rolling out and hand pounding the dough and then cutting it into bun shapes. Buns are placed into a tall proofer that remains at room temperature, and then are rolled out and proofed again. Staff place the buns into one of five fryers that sit adjacent to one another. This fryer, which resembles a donut fryer in shape and its shallow, eight-inch vat, is dedicated to fry bread not only because it is in continual usage during the day, but because it uses a different oil than the other fryers that are used for chicken and sides.

"Each day, Rex's fries up to 400 buns," Archer says. "Each customer receives one as part of their meal. The fry bread is an integral part of the concept. It tastes like a savory donut. Guests open it up and pour honey over it, so it is like a dessert." Rex's contracts with a manufacturer to make a proprietary flour mix for the fry bread.

Staff perform the breading task at two tables that sit in front of the fryers. "Every menu item is hand breaded," Archer says. Chicken is delivered already hand cut and marinated in packages that must be opened and drained before breading in Rex's propriety mix. Staff use another table to portion chicken chunks for the various orders.

After menu items are fried, staff hand them through the pass window to the expediting area. Adjacent to the expo area is the cold salads and sandwich station. A cold rail holds ingredients such as lettuce and tomatoes. Also at this station, staff portion all the hot side items, such as ranch baked beans, mashed potatoes and green beans, which are warmed in a steam cabinet on the fry line and held in warmers at the expo station.

A member of the expediting staff coordinates all the orders from the servers, puts menu items together and places them on a shelf for servers to access. "We have heat lamps at the pass-through windows, but we cook to order as much as possible," Archer says.

Servers bring orders to tables, which have table numbers displayed. After ordering, each customer is given a number which he or she places into a stand that sits on the table. Customers are also given beverage cups when they order, and they fill these up with their selected fountain drinks and ice tea at a beverage station. Sauces also are available at this station. Though customers can refill their beverages and obtain extra sauces, usually servers perform those tasks. "We average five minutes from the time the guest orders to the time they are served," Archer says.

The production process is so efficient, Archer adds, that occasionally the food is ready before customers have filled their beverage cups and returned to the tables.

BBI's plans for Rex's expansion are ambitious. Rutkauskas says four franchises will be opened this summer, and a projected 10 will debut in 2012. The company is betting that a limited-menu concept that maximizes efficiency with its equipment selection and placement, as well as its specialized division of labor and training, will attract franchisee interest.
Key Players
Facts of Note