The North American Association of Food Equipment Manufacturers recognized the contributions of two longtime members to the organization as well as the foodservice industry with a pair of awards. Thomas R. Campion, CFSP, of Franke Foodservice Systems Americas received the 2021 Louise O’Sullivan Award of Excellence and Steven Follett, CFSP, of Follett, LLC, received the 2021 William W. Carpenter Award. 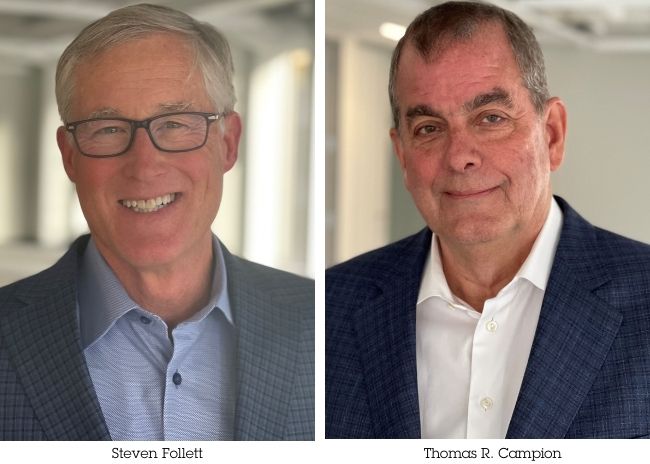 Formerly known as the President’s Award, the Louise O’Sullivan Award award recognizes a long-time NAFEM volunteer for that individual’s long-term work on behalf of the association. The recipient of the award is not a member of the NAFEM Board of Directors or an officer at the time they receive the honor.

Campion, who serves as executive chairman for Franke Foodservice Systems Americas, has been actively engaged with NAFEM for more than 40 years. He has chaired committees, managed working groups, led ad-hoc task forces, served on the board of directors and The NAFEM Show planning committee, managed NAFEM’s finances as treasurer and was NAFEM president in 2012-13.

Established in 1993, the William W. Carpenter Award is NAFEM’s highest honor and is bestowed on an industry professional who has continually contributed to NAFEM’s success and to the enrichment of the industry for more than 20 years.

Follett, former president and CEO of Follett, LLC, held a variety of roles with NAFEM, including committee member, committee chair, The NAFEM Show chair, board member, officer, and president. In addition to running his own business Follett was widely recognized by the industry at-large for building consensus and advancing industry causes, communication and education, per a release announcing this award. His commitment to the association continues as Follett provides leadership to the NAFEM Young Executives Forum (YEF), a group of rising leaders in NAFEM member companies, to expand their skills as they strive to build great foodservice equipment and supplies manufacturing companies.