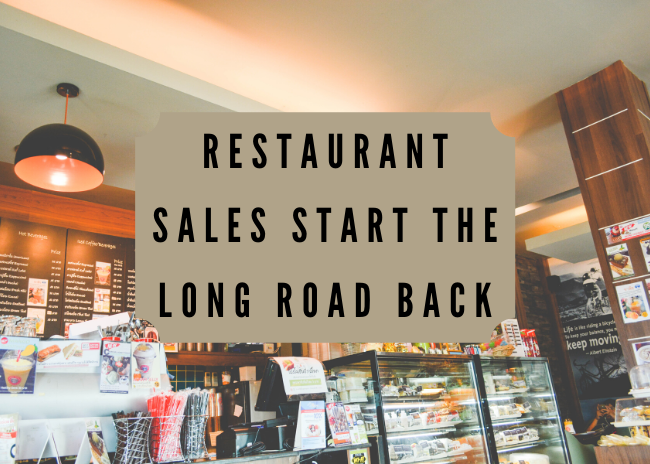 Despite still operating at historic lows compared to one year ago, the restaurant industry is slowly starting to claw its way back.

For the week ending April 19, for example, restaurant customer transactions declined by 36% compared to the same time period last year, according to data from the NPD Group. This represents a 7% improvement compared to the previous week.

Looking at the results by segment, quick-service restaurants saw transactions decline by 34% compared to the same period in 2019, which is 7% better than the previous week. The full-service segment saw its transactions decline by 72%, also a 7% improvement from the previous week. The rate of decline for casual dining full-service chains improved 12 points from a decline of 77% in the week ending April 12 to 65% the week ending April 19, reports NPD.

This growth coincides with some strong financial results reported by a handful of publicly traded restaurant chains. For example, Domino’s reported same-store sales increased 7.1% from March 23 to April 19, or the first few weeks of its second fiscal quarter. To put this growth into context, the Michigan-based pizza chain reported same-store sales growth of 4.4% for its first fiscal quarter.

It's not entirely clear what’s driving these changes. Some feel government-issued coronavirus relief payments may have prompted consumers to increase their spend at restaurants. “Whether the relief monies received can sustain an upward trajectory in restaurant transactions remains to be seen,” says David Portalatin, NPD food industry advisor. “There are also significant concerns for consumers’ overall financial health with more than 26 million now unemployed.”

In addition, it would seem as if consumers are starting to get comfortable with their new normal. As of April 17, 61% of consumers said they were very concerned about coronavirus, down 3% from April 10, per a study from Datassential. Consumers’ concerns will likely keep consistent until there’s a major breakthrough, either positively or negatively, regarding coronavirus.

Similarly, 61% of consumers said they will avoid dining out, while 24% say they are concerned but will still eat food prepared outside of the home, per Datassential. Only 15% of consumers have no concerns whatsoever about dining out. These have remained relatively consistent over the past few weeks.

While things seem stable on the surface, consumers’ underlying confidence remains fragile. With many states targeting May 1 to start slowly reopening for businesses, consumers are not entirely sure that’s the best course of action given the number of people testing positive for COVID-19 continues to rise in many areas. As a result, 72% of consumers feel starting the reentry process on May 1 is much too soon (44%) or slightly too soon (28%), per Datassential. In contrast, 21% of consumers feel May 1 is the right time.