A far cry from historic mom-and-pop concepts, pizza chains such as MOD Pizza, Pie Five, Your Pie and Blaze continue to capitalize on the fast-casual, prep-on-display model. With an emphasis on transparency, these designs play on the open-kitchen format, with prep and cook areas both in full view of customers. Operators use a combination of heat and speed to turn out a high-quality product in a minimal amount of time.

“The approach to design is the same as for any type of open-kitchen environment,” says Victor Cardamone, president and CEO of Mise Design Group, Pottstown, Pa. “The most important elements are speed and efficiency. How fast can I execute the menu? And because it’s an open kitchen, how can I make it entertaining? Because that’s what it is — entertainment.” 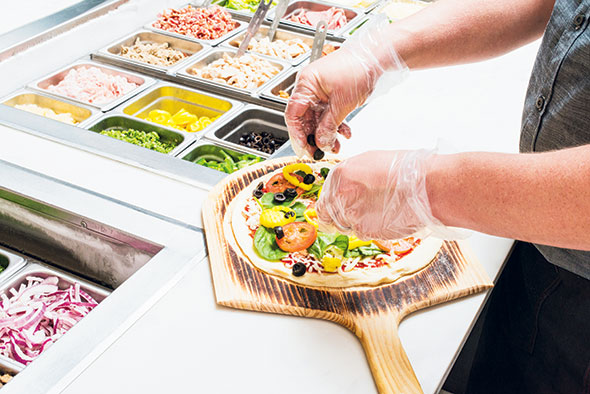 The oven serves as the core of any pizza operation, says Brian Morehead, vice president of sales, chain equipment, for equipment and supplies dealer Singer Equipment Co., Elverson, Pa. He believes this is particularly true in the fast-casual segment. “The oven provides that visual element,” says Morehead. “It also offers speed, cooking pizzas in two to two and a half minutes.”

Conveyor ovens were the impetus for the growth of fast-casual pizza concepts. Using forced air, radiant heat or infrared heat, these ovens allow pizza operators to create high-quality pizza in a tight timeframe.

Other fast-casual operators, such as Your Pie, an Athens, Ga.-based chain with more than 70 units, have built their designs around brick ovens. “When I originally conceived of the idea, I thought of using a conveyor oven,” says founder Drew French. “But when I went to Italy on my honeymoon, I saw brick ovens. I liked the visual aspect of it. And the taste of the brick-oven pizza was out of this world. So, it became the heart of our restaurant. Everything is built around it.”

Staff also use the brick oven at Your Pie to cook other types of menu items, such as toasted sandwiches and baked pastas. “We really don’t need a lot of cooking equipment,” French explains. “I don’t have to worry about fryers, grills, etcetera. The simpler we keep it, the better.”

Keeping everything highly visual serves as a key design component of many fast-casual pizza chains. “Our goal from the beginning was to be very visual,” says French. “We didn’t want to hide anything. So, our front-of-the-house kitchen is much bigger than the back of the house. We do a little bit of prep back there, but it’s mostly storage. Veggies in particular taste better the closer the time between prep and eating.”

In-house prep for most chains includes pizza dough. “It’s cost-effective and you have a fresher product,” says Cardamone. “Your proofer cabinet can be semi-hidden, depending on the orientation of the work space, or it can be out in the open.”

One possible equipment choice for labor savings, according to Cardamone, is a dough former. Although it has a high price tag, he believes it can pay for itself over time. “You make 20 pounds of pizza dough, drop it in the hopper and the machine cuts off dough pieces at preset weights, rolls them into balls and chucks them out at the bottom of the unit. In addition to labor savings, it takes away human error.”

The same can be said for the pizza presses. However, Cardamone believes that, while pizza presses may bring labor savings, from a chef’s standpoint, “there is some value in not having a perfectly round pizza. It adds to the individual nature of the operation. But a dough former can be a game changer in some operations.”

Many operators encourage customers to create their own pies — some operations may offer 50 items or more from which to select — all pizza chains offer standard menu items as well. This can also work as a design element because it adds to the speed and efficiency of the pizza operation. “Every concept is slightly different in how they put together their product,” says Tom Lawson, president and CEO of Singer EVI, a design and consulting firm based in Glenelg, Md. “But one of the things we’ve learned from the QSR segment is speed of service is key. Choosing your own ingredients can add two minutes to the order time. Having a selection of menu’d pies eliminates that person walking down the line asking questions about certain ingredients. The menus have well-thought-out items that have a broad appeal.” 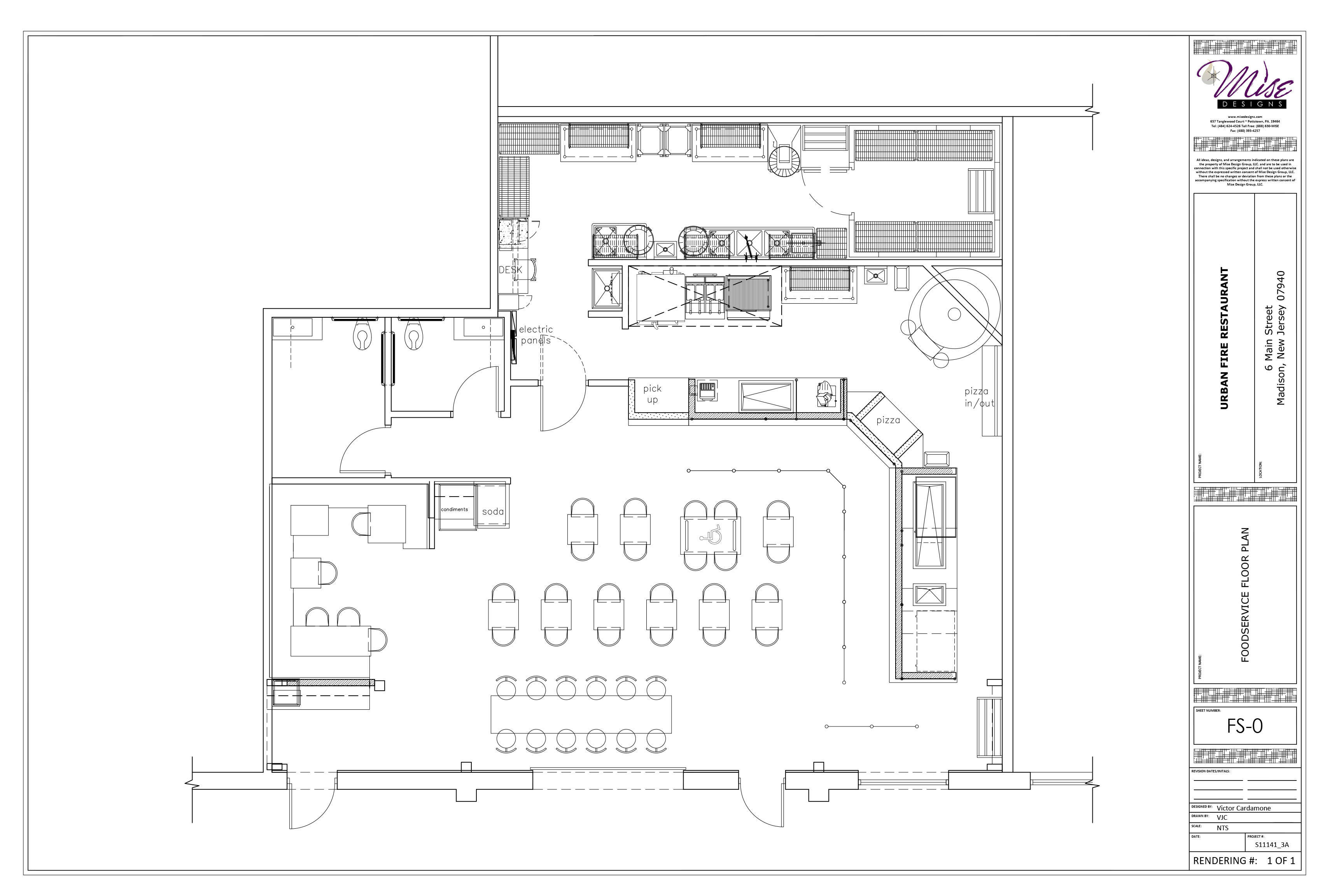 The Counter and Beyond

The entrance design of many pizza chains funnels customers past menu boards so they can decide whether to choose a menu item or make their own, and then walk up to the counter. At that point, the process — and the design — are not much different from Chipotle or Subway.

“The ingredients are different,” says Cardamone. “But the biggest difference is counter space. The work space at Subway is only six inches deep. The space at Urban Fire, one of the concepts we’ve designed, is 18 to 24 inches deep. You have undercounter storage for dough as well as for your pizza toppings. And those toppings are displayed in drop-in cold pans with a nice countertop, perhaps made of reclaimed wood. And, of course, there are sneeze guards everywhere.”

Your Pie stores all feature clean, white marble countertops, which — like the brick ovens — add a visually appealing Italian flair without actually using Italian marble, which French says does not hold up well in a foodservice environment. Behind the pizza prep area are stations for ingredient prep, as well as pass-through refrigeration next to the oven.

“In our newer stores, we’re adding a second service line to handle third-party and online ordering, as well as to satisfy our catering business, which is growing,” says French.

Cardamone, trained as a chef, compares the behind-the-counter design to an assembly line, with all of the flow moving in one direction. But because the workspace is open, pizza makers need to be spread out a bit more than they might be in the back of the house, so that nothing blocks the customer’s view of their pizza creation. This can be done either by assigning each employee a job — shaping the dough, saucing it, adding toppings, cooking the pie — or by having each of two or three line workers take charge of one diner’s order.

“You always have to be mindful of sight views,” Cardamone adds. “You want to be able to direct customers to where you want them to look.”

The fast-casual pizza chains have become so successful that other types of restaurants are trying to emulate that success. EVI’s Lawson notes that Primanti Brothers, the iconic Pittsburgh sandwich chain, has begun adding pizza to its menu and retrofitting stores to add a pizza prep station. “Obviously you’re not having 15 or 20 feet of prep space,” he says. “You’ve got a 60-inch refrigerated workspace; conveyor ovens are in the back of the house, not seen. But it’s a way of offering more menu items to customers.” It’s also a reflection of the efficiency of the design, which complements the visual design approach.