Ventless Debates: The pros, the cons and the Conversations Happening around Ventless Equipment

Mobile ventless cooking units now also exist, which can even allow operators to plug induction burners and grills into the system. The range of available ventless equipment is much broader today than even five years ago when the most widely known pieces of equipment were combi ovens and dishwasher models that replaced the vent hood with an energy recovery system to trap and recycle steam and heat. 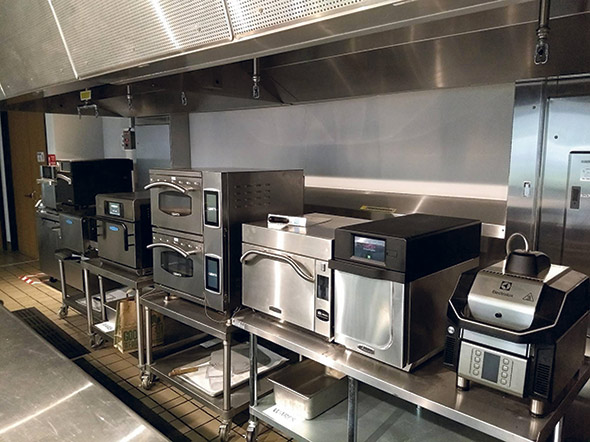 The one obvious advantage to all ventless equipment available today is the fact that it requires no external ductwork. “Depending on what is needing to be vented and the distance [to the outside], it can have a large cost impact for the client,” says Frank Flowers, senior project manager for Inman Foodservices Group in Nashville, Tenn.

Ventless can also enable cooking in spaces that would otherwise be difficult, notes Andrew DeLage, president of A2O Foodservice Design and Consulting in Chandler, Ariz. An example of this type of space would be one “where a Type 1 exhaust hood would be prohibitively expensive, usually [where it’s] more than three stories to the roof or there is no direct route to a roof,” he says.

Another plus to ventless equipment: portability. Since the equipment is not tethered to an exhaust hood, operators can move many pieces of ventless equipment, allowing for plug-and-play functionality. Several of the ventless cart cooking systems are expressly designed for mobility; some feature glass fronts and sides to give the feel of display-style cooking.

Finally, a side benefit of ventless cooking systems is that these items “are really good at reducing odors in facilities where food odor is considered bad,” says DeLage. That makes them particularly useful for sites like healthcare facilities or hotel ballrooms, where lingering odors could prove unpleasant or undesirable.

“The huge disadvantage associated with ventless equipment is that it does nothing to mitigate the heat gain produced by the equipment,” says Ken Schwartz, president of SSA Inc., a hospitality design and consulting firm in Tampa, Fla. In a traditional vented system, the primary function of the hood is to remove grease particles from the air. “A secondary benefit is that it’s also removing latent heat from the space,” he adds.

With a ventless system, that heat has nowhere to go — except back into the kitchen or dining areas. If the design process does not take into account additional heat, the air conditioning system will have to work harder to compensate for the increased heat load. In addition, Schwartz adds, the increase in ambient heat could affect the sensitive controls or electronic systems of other kitchen equipment.

Another potential disadvantage to ventless cooking appliances is local regulations that may prohibit usage of gas-powered equipment without a fire hood, thus limiting the operator to using only electric equipment. That can be less appealing in a display cooking situation. “Arguably, there is less ‘sizzle’ and no flames to see,” says DeLage. Along with that, electric cooking can necessitate some menu changes. “Don’t expect to cook a six-ounce chicken breast or burger from raw on a surface cooking system in less than ten minutes,” he adds. “These items need to be parcooked.”

Flowers agrees, noting that the use of electric equipment, “depending on your menu, can cause a few issues. But they can be worked around.”

When to Go Ventless

So when exactly do these foodservice designers recommend ventless equipment? The decision definitely has to be made on a case-by-case basis. “There are some cases where it’s a necessity and a ventless system cannot be avoided due to building conditions,” Flowers says. “But we really try to stay away from recommending a stand-alone ventless system due to the limitations of equipment. But we do recommend ventless combi ovens on many of our projects.”

DeLage feels “from a cost perspective, if you can do traditional hood systems, it is probably best. You’re going to have more flexibility on the type of appliances you can use.” He points to a ventless cooking cart as an example of the limitations sometimes found with this equipment. “It’s four feet long, but in order for it to be ventless, it’s not the same temperature all the way across. So out of four feet, you get two feet that’s really hot and the rest is warming.”

The decision to go with ventless equipment always depends on the facility. Sometimes the facility may have constraints that may not allow for ductwork to run throughout the space, Schwartz explains. “Therefore, ventless may be an opportunity, but it’s limiting,” he says.

The location of the equipment’s filtration system is another consideration, Schwartz adds, especially when dealing with tight kitchen spaces. “There are some systems where the filtration is top mounted; some of them have it side mounted,” he says. “In a case where you need a couple of these, maybe one system is on the right and one is on the left, so all that equipment is kind of butting up together.”

These foodservice designers have a few more tips for anyone considering purchasing ventless equipment. Schwartz recommends carefully scoping out any local building codes and determining whether the ventless equipment will comply. “There are some ventless systems that have a vented duct to help pull some of the heat out,” he says. “The problem with that is most jurisdictions will say, if it is a kitchen exhaust hood duct, then it must be treated as a grease duct and must be fire-rated and protected.”

DeLage advises to “make sure you maintain the manufacturer’s recommended clearances all around. Blocking air circulation could really shorten the life of one of these rather expensive appliances. And be diligent with the mechanical engineer so that the heat load is taken into consideration.”

Finally, check out any ventless equipment carefully beforehand, DeLage advises, to gauge its applicability to a particular kitchen situation. “Request a demo before buying,” he says. “Not all manufacturers are equal. Do your homework.”

One new casual restaurant concept will depend heavily on ventless and hoodless equipment to run its restaurants more efficiently. Jon Taffer, hospitality consultant and “Bar Rescue” TV personality, plans to launch Taffer’s Tavern in the first quarter of 2020. Its billed as a “high-volume, small-footprint format.” Plans call for the units to seat between 120 and 150 patrons with additional patio seating.

“Restaurants need to do more volume in less square feet. We want to do more volume with fewer people because of labor and food safety issues. So we wanted to come up with a concept that would address that,” says Dan Rowe, founder and CEO of Taffer’s Tavern franchisor Fransmart. Rowe says Taffer’s Tavern will handle some of those issues by primarily using hoodless/ventless equipment, such as combi ovens and speed-cook ovens.

Since most of the food Taffer’s Tavern will serve will be prepared off-site by copackers and rethermalized in the restaurant, there’s little need for the traditional cooking-from-scratch kitchen equipment, Rowe says. The menu design will leverage the capabilities of the equipment and lessen the amount of in-house fresh preparation done on-site.

A common assumption is that ventless equipment automatically consumes less energy simply because it requires no venting or hood. Not true. “The ventless strategy does not lower the utility bill,” according to Richard Young, director for Frontier Energy/fishnick, operator of the Food Service Technology Center (FSTC) in San Ramon, Calif.

“Except for the heat-recovery dish machines, most ventless appliances do not save energy based on being ventless alone,” adds Rich Swierczyna, senior engineer for Frontier Energy/fishnick.

A big factor in the energy equation is the latent heat, they say, citing the fact that the HVAC system will do “extra duty” in handling the heat. A 2016 ASHRAE (American Society of Heating, Refrigerating and Air-Conditioning Engineers) study by Syracuse University modeled different commercial kitchen configurations of appliances and hoods in every U.S. climate zone. It concluded that “it cost less money to exhaust the waste heat directly to the outside of the building than to cool the space with the general HVAC system within the foodservice facility,” Swierczyna says.

Local jurisdictions are just learning the special requirements of ventless systems, says Young, who notes that many local authorities “believe a ventless appliance adds no heat to the space. They later find out the existing cooling capacity on the roof cannot keep up with the additional heat and moisture gain.” He notes that some municipalities now require heat load calculations to ensure that the facility’s existing cooling capacity can handle the additional heat output.

There is some hope on the horizon for improved energy efficiency, Young says. “Emerging technologies, such as heat-recovery hood filters,” he says, “are trying to transfer the heat from the hot exhaust air to water coils via a heat exchanger in the hood.”