Pastry, or bakery, kitchens are specialized operations. Yet restrictions beyond an operator’s control can hamstring the effectiveness of these operations. For example, pastry kitchens often make their homes in pre-existing spaces and have to work around the flaws of those spaces. So when operators have the opportunity to design a new production space, they take advantage of the chance to put best practices into use.

In the Pittsburgh suburb of Oakmont, Oakmont Bakery reopened in a new building that measures two-and-a-half times larger than its old space. The 11,000-square-foot production center supports a retail space that many local residents consider the premier bake shop in the region. Bakers no longer have to wheel pastries from a 3,500-square-foot kitchen across an empty lot to a discrete shop. Now, baked goods roll out of the kitchen and right to a wall of display cases. 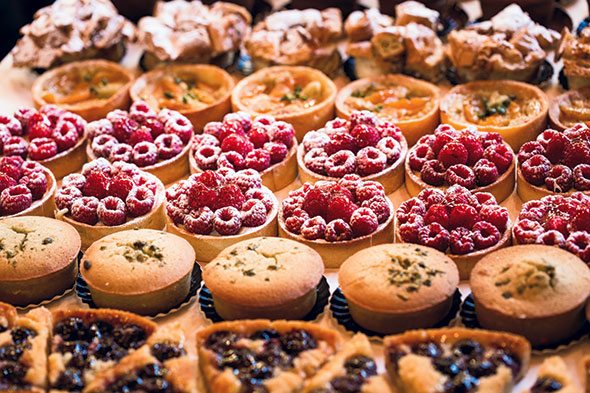 At the University of Massachusetts Amherst, one of a limited number of campuses with its own bakery, when the new dining commons is complete it will allow Dining Services to move its bake shop out of the basement of one building into a showcase space. Scheduled to open in the fall of 2020, Worcester Dining Commons will shine a spotlight on head baker Simon Stevenson and his team of award-winning bakers.

Two projects, one a commercial enterprise and the other an institutional program, each have the opportunity to demonstrate best practices in baking. Both take advantage of new construction to address a major challenge: production flow.

“Unlike our previous locations, which were built prior to being transformed into bakery buildings, this building was built with production flow as the most important factor in the layout,” says Marc Serrao, owner of Oakmont Bakery. “We designed the kitchen linearly, to start at the beginning with ingredients and mixing, to dough makeup and scaling, to proofing and baking, to move smoothly through the facility until products reach the display cases.”

Oakmont’s new space — 11,000 square feet — provides enough room for bakers to work “without the annoying
problem of bumping into each other and the luxury of being able to add equipment when necessary,” Serrao adds. Compared to the previous location, the new space includes two more ovens, an additional proof box, and three large worktables, all of which help improve speed of production. Other new equipment includes a water metering system, a pair of 140-quart mixers, floor scales and a new bagel kettle. Finally, a new fully computerized parallel refrigeration system can notify staff as soon as a temperature issue arises.

At UMass, the flow of the new bakery kitchen will be circular, rather than linear. The kitchen design supports the flow of ingredients as they enter through the loading docks and leave as staff distribute finished products to the four dining commons spread out across campus, explains Stevenson.

“The flow of product was really thought out,” Stevenson says. “In the old building, which was 50 or 60 years old, our space was originally designed to be a food prep kitchen. There were support columns that were basically in the way, and equipment was fitted around them. So many machines were awkwardly placed. In the new space we will have clear lines of sight and the production will move strategically through the space.”

Baking is much more of a science than other forms of cooking, with chemistry of vital importance at every step of the process — particularly with respect to the making of doughs and batters. At Oakmont Bakery, Serrao says he is happy to be able to control kitchen temperatures much more carefully in the new space.

“In our old location, we were not able to use the air conditioning [to cool down the kitchen] because of the size of the building and the proximity of ovens, fryers and kettles to makeup equipment and worktables,” Serrao says. “It just didn’t work, no matter how we tried to upsize the units. We were able to control things to a point with temperature-controlled liquids, mixing procedures and the use of coolers and freezers.” At one point, he adds, the HVAC was four times the size of the standard requirement for a building of that size.

Oakmont’s new kitchen, however, has HVAC units that have been engineered to take into account current and future equipment, and humidity controls have been added. A state-of-the-art hood system efficiently expels heat and draws in fresh air, making the kitchen a healthier and more comfortable working environment.

Less Can Be More

At UMass, Stevenson says that the new kitchen will measure 6,000 square feet, which is less than what is available in the current space. Because the design provides more open space, though, his team will be able to produce larger batches of items at one time. Equipment that will help them achieve this include a 4-deck oven and a 350-pound capacity spiral mixer. These will complement 2 rotary ovens, 2 4-rack proof boxes, a 6-burner stove, 40-gallon steam-jacketed kettle and a 30-gallon tilting skillet.

A more efficient design can also help with production scheduling.

“Our main goal is to make more product at one time so that you don’t have to repeat the exercise,” Stevenson says. “We’re not baking items in advance and then freezing them to be used weeks later. The muffins served in the morning are baked that morning. The lunchtime and dinner desserts are made that morning.”

An excellent example of this, Stevenson notes, is brownies — one of the most popular bakery items at UMass. “We go through a tremendous number of brownies. But you don’t want to try to crank out so much product that you can’t keep up.”

The new bakery will allow UMass to produce 25 sheets of brownies at a time, enough so that brownies will appear on the production schedule every 3 days, instead of daily. Staff will freeze brownies they do not serve on the day they get baked. But UMass will hold these brownies for no longer than a week.

The deck ovens, in addition to providing more capacity for baking pies and muffins, will also allow UMass to create an item that was previously purchased: artisanal bread. Stevenson says this will enable the department to expand and add more authenticity to its menu.

Flexible kitchen design elements, such as electrical outlets strategically located throughout the kitchen, will enable bakers to easily move smaller pieces of equipment, such as mixers, without having to stretch cords or run extensions.

When designing a new or updated kitchen it’s important to make the facility easier to clean. Several features allow this to happen, according to Jim Sullivan, principal at designer J. Sullivan Associates, Oakmont, Pa.

“A lot of thought was put into maintaining easily cleanable work spaces,” Sullivan explains of Oakmont Bakery. “We used FRP (fiberglass reinforced plastic) tiles on all the walls, and we built hoses into the walls for easy access. The hoods are stainless steel and include cladding to the ceiling. The floors in the kitchen are polished concrete, and all equipment has been installed at least 12 inches from the walls in order to be able to get behind them to clean.”

At UMass, the facility will include stainless steel worktables because of their ease in cleaning and maintenance. The design will position the equipment for easier access.

Despite these updates, the kitchen will still feature old-fashioned butcher block tables because bakers like working on them, Stevenson notes. “We like to stick with what works, because we want the bakers to be comfortable,” Stevenson explains. “I’m not so interested in ovens that are programmable with computer chips and such. I’m more interested in hiring qualified bakers. They are my computers, if you will, and we want to make this kitchen a good home for them.”