Selim Bassoul has retired from his role as chairman, president and chief executive officer of Middleby Corp. Company veteran Timothy FitzGerald was named CEO and a member of Middleby’s board of directors. David Brewer was promoted to executive vice president and chief operating officer for the manufacturer of commercial foodservice equipment. And Gordon O’Brien, who has served as lead independent director of the Middleby board of directors since 2010, assumed the role of chairman of the board. 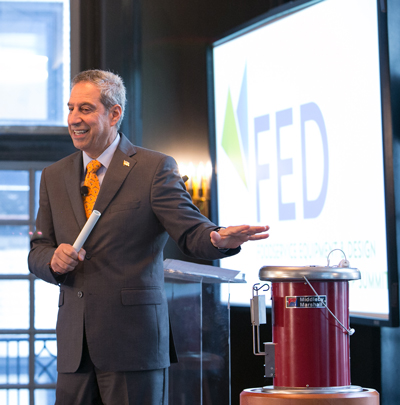 Selim Bassoul, speaking at the FED Global Thought Leadership Summit 2016.
FitzGerald joined Middleby in 1998 as vice president and corporate controller. He served as the company’s chief financial officer since 2003. Bryan Mittelman was promoted to Middleby’s CFO from chief accounting officer. Mittelman has 27 years of finance experience and prior to joining Middleby he spent five years as a vice president and controller of Knowles Corporation.

Brewer has spent more than two decades in the foodservice industry both as an operator and a supplier. He has served as chief operating officer of the Middleby Commercial Foodservice Group since 2009 and developed the Middleby National Accounts team. Brewer joined the company in 2007 as president of Middleby’s Pitco division. Prior to Middleby, he served as president and general manager at Lantech Corporation. Brewer also held leadership positions at Yum! Brands Corporation and Chiquita Brands International.

O’Brien has been associated with Middleby since 2001, a member of the Middleby board of directors since 2005 and has served as lead independent director since 2010. He has been managing partner at Cannon Capital since 2017.

Bassoul plans to focus on his family and his humanitarian efforts through his Bassoul Dignity Foundation, per a release announcing this news. He will also serve as a consultant to the Middleby board. Bassoul spent more than 23 years with the Elgin, Ill.-based foodservice equipment manufacturer.