It was a tough decision,” says Peter Testory, director of dining and culinary services, Division of University Housing at the University of Wisconsin–Madison, referencing the switch to reusable plastic containers in university housing foodservice facilities. Going all-in was the tough part, he says, which meant eliminating other options for students seeking to take food outside the dining area.

“We knew it wouldn’t work if we offered a choice — disposable or reusable — or if we only did one facility, so we went all-in and now only use reusable containers,” explains Testory.

The rip-the-Band-Aid-off approach to the reusable container program, dubbed Ticket to Takeout, has proven a success in lessening what winds up in landfills, Testory says. 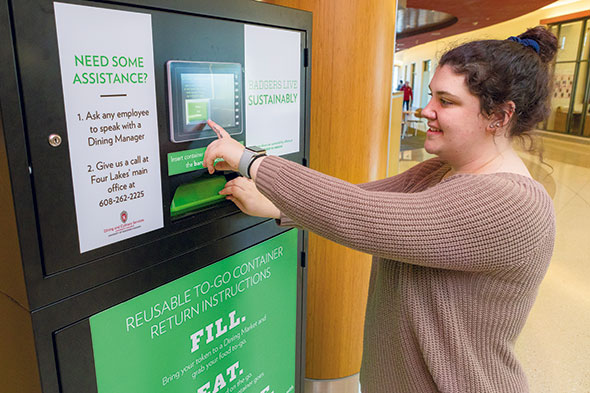 Students return used containers to a vending machine-like unit at all housing dining facilities, which in turn issues them a token for their next visit.

The reusable program went into effect in the fall of 2018. All campus housing residents, the bulk of whom are freshmen, received a free token and instructional card in their dorms explaining the program. The token holds a $5 monetary value, which grants students with a dining program free entry into the program. The cost is $5 to enroll for campus staff, students not living in residence halls and visitors.

The catch is that no other option exists for off-premise containers in the six University Housing Dining Markets. For those who choose to take the reusable containers outside the dining facility, say, to eat in their dorm room, they need to return the container — clean — to receive a new token. Otherwise, it costs $5 to purchase another token for the off-premise container.

When he would tour the university’s housing facilities, Testory recalls seeing trash cans overflowing with the compostable containers. “Just using a compostable product doesn’t make you sustainable,” he says. “It has to end up in the proper waste area or you are not hitting the sustainability mark.” 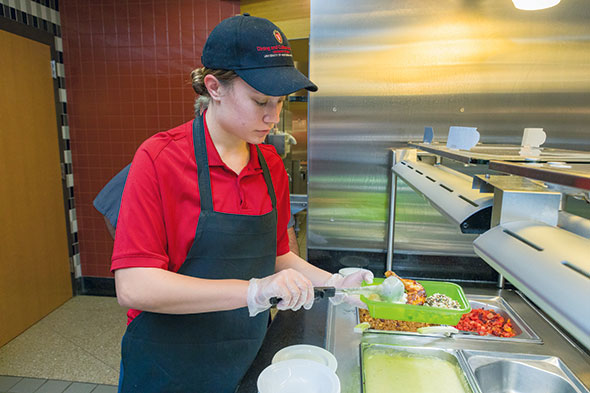 The takeout program has also spurred a bit of a resurgence in on-premise student dining, where staff plate food on melamine dishes or china. “Last year, 6 out of 10 students who got a disposable would be eating in the dining room. Today, I rarely see students eating from the green containers,” Testory says. He considers that a side benefit in terms of student socialization. “A great piece of this is that it has encouraged communal dining,” he says. Students share a meal together at the 4-top, 6-top or 8-top seating configurations.

Most of the faculty have also bought into the program, Testory says, and some even opt for multiple containers to keep food items separate. For example, those who don’t want their green beans to touch their pizza in the same non-dividable container purchase a second $5 token for an additional container.

When empty (and clean) students drop the used containers into vending machine-like units at any housing dining facility, which in turn issue students a token. Testory’s original expectation was that users would turn in roughly 30 to 40 containers a day. “I would have been happy with that,” he says.

Consider Testory elated since an average of 626 containers go into the machines daily. “We did not expect that,” he says.

Each machine holds a couple hundred containers at a time. “There’s not a whole lot to it,” Testory says. “The bottom has kind of a laundry basket-style piece that collects the containers, which are branded for us. It then flips the container, drops it and dispenses a token.”

Once collected, the washing cycle kicks in, which Testory did foresee as a potential logistical issue. “The challenge is they would never dry,” he says of the plastic containers. To date, staff use a shelving system (they rejiggered it and took the racks off) and hang containers there to air-dry. “It takes a few hours but hasn’t become unmanageable yet,” he says. 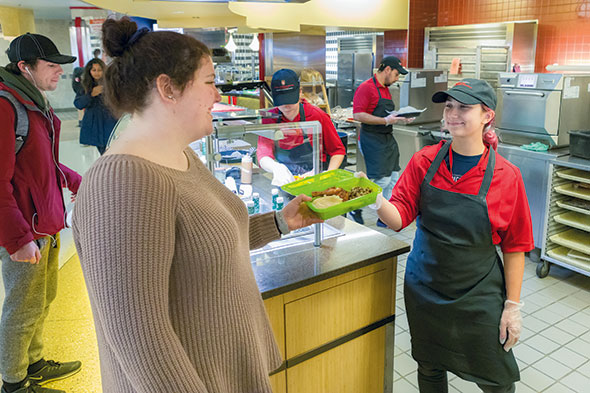 Students taking food to go from University of Wisconsin residential dining programs receive their meals in a reusable container that they later return.

While Testory reports nothing but positive feedback from students and faculty, he does note a challenge with campus visitors. “Those coming here for a one-time meal don’t always want to buy into the program,” he admits.

The only other drawback users note, Testory says, is having to keep track of their token. “We are very firm that you have to have your token or we charge $5 for the container,” he says.

Testory is currently exploring ways to possibly integrate the program with a POS system to increase user-friendliness.

Students who received tokens when they started school in the fall of 2018 will have the option of remaining in the program the following school year or turning in their remaining token for a free ice cream or something similar — Testory is still working out that detail. Since so many residents are freshmen, he anticipates many not maintaining their campus dining program when they return as sophomores, especially if they no longer reside in campus housing.

The university also currently has a pilot program in the works that includes a larger container option. “We have gotten some feedback that a bigger container would be nice,” Testory says. But, he explains, the current 6-inch-by-4-inch container size generally fits the bill in terms of a user’s ability to stash it in a backpack.

Testory credits the all-in philosophy for much of the program’s success. “There was no other option to take food off-premise. There’s really only two arguments as to why it would be a bad idea: one, you don’t believe in sustainability — and we know this generation of students is one of the most sustainable — or, two, you just don’t want to put the effort in to participate.” The university did include students in the decision-making process, presenting the idea to those in the residence halls and to the university’s student advisory board. Testory says there was support from all entities.

The university does continue to use disposables in two specific circumstances: to fulfill mobile orders, which Testory says is “very limited,” and to fulfill orders for students with severe dietary restrictions, which staff handle via one-on-one cooking.

Since the program’s start, Testory says quite a few schools have reached out to find out more. His No. 1 piece of advice: “Don’t allow options, or they will choose disposable every time. Rip the Band-Aid off; go all-in. That’s how you change the norm.”