Firebirds Energizes with a New Design

The old-school steakhouse has its place. Plenty of occasions call for a more formal experience, something that features the old-school sophistication of low lighting, rich woods and white tablecloths.

Elevated still has its place in an increasingly informal world, as do lively, energetic experiences.

Restaurateurs continue to roll out new prototype designs to provide guests with a more exciting environment. Among them is Charlotte, N.C.-based Firebirds Wood Fired Grill. In November 2017, this 45-plus-unit polished-casual chain rolled out the first location with a new design in Jacksonville, Fla. 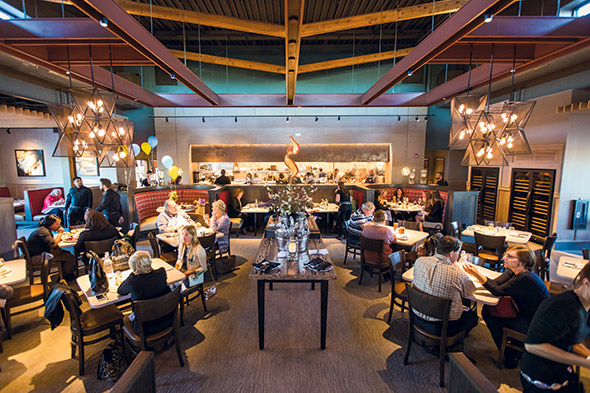 Anything but stodgy, this new design features an enhanced bar experience with some Instagramable features, design elements that play on the themes of fire and flight, and a curated view into the kitchen that showcases the activity of the chain’s wood-fired grill.

Since Firebirds redesigned its space to provide more energy, the chain wanted the design to communicate that energy to passersby, says Mimi Williams, associate partner at starrdesign, the Charlotte, N.C.-based architecture and interior design firm for this project.

The new design, then, includes large windows on three sides (vs. two sides in legacy stores) that provide potential guests with a glimpse of all that’s happening inside. “One of the things the younger generation wants is a place to go and be part of activity,” Williams says. “Just showing the inside out was important for Firebirds in order to attract all generations, really.” 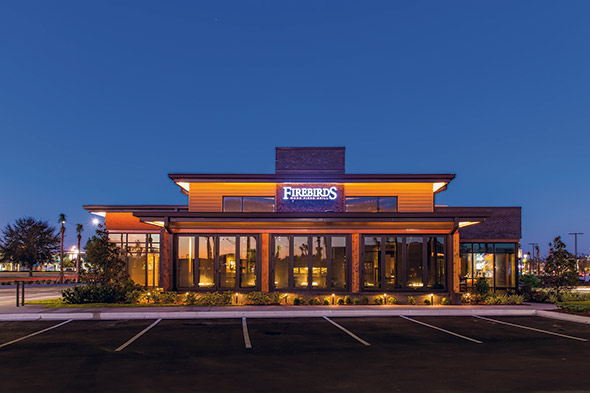 Upon entering the restaurant, guests encounter Firebar, where the display of spirits provides the first eye-catching element. These bottles are backlit, arranged by color and sit on acrylic shelves with different depths, creating a waterfall effect. It is actually a carryover from the previous design.

Additional bar elements that drive home the fire and flight themes include a geometric dropped ceiling reminiscent of wings (the flight connection) and a bar face with vertical glazed tiles and glass accents that suggest the movement of flame (the flame connection).

Flame goes from suggested to literal with the restaurant’s fireplace. In the previous prototype, the fireplace separated the bar from the dining area to the left. It is now located on an outer wall and open on both sides, making it visible to outdoor patio guests as well as those in the bar area. “Before, [the fireplace] served as a divider between the bar and the dining room. There was not a clear connection between them. We wanted it to feel like one unified space, so we moved that fireplace element to the exterior of the building,” Williams says.

While the designers wanted an open aesthetic, they didn’t want the restaurant to be too boxy. To help break up the space, they placed a banquette along the border of the bar and dining room paired with a metal divider with chevron-like patterns.

Seating in the dining room includes booths, banquettes and four-tops, all made with a white solid surface material that helps brighten the space.

One of the defining features of the dining room is a large server station that was originally designed as a community table. While used for guest seating, the community table congested the space. Revitalized as a server station, it lets floor staff serve guests more quickly and allows the restaurant to showcase its sparkling water in an elevated manner. The water is displayed in clear glass bottles, chilled in a metal tub.

The most eye-catching element of the dining room, though, is the window into the kitchen. According to Loftis, this provides an “intentional view” of the centerpiece of the chain’s operation and its brand: the wood-fired grill.

This view into Firebirds’ kitchen represents a change from the previous design, says Executive Chef Steven Sturm. In earlier stores, guests were given a much more open look into the production area. Now, the view frames the action of the grill, with no significant exposure to the less glamorous aspects of the back of the house. 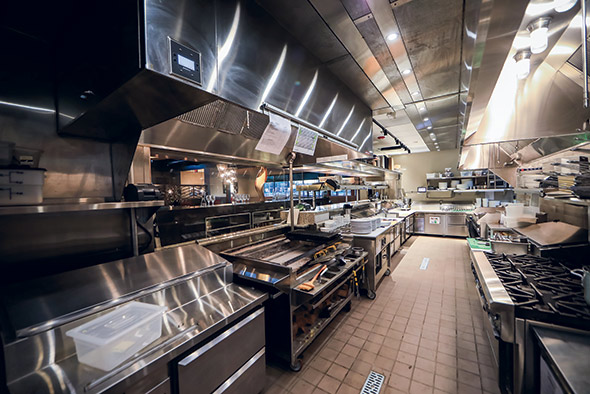 Firebirds’ unusual kitchen design places the grill on one side of the kitchen and most other hot equipment on the opposite side. The chain stresses this supports an efficient workflow while allowing it to showcase its wood-fired grill to customers.

This shift to a more curated look into the kitchen also influences the kitchen design, starting with the pantry station. While this station used to be open to the dining room, it now sits against a wall. That wall holds plates, utensils and any other necessary items close at hand for staff.

The pantry station serves as the start of the line that faces the dining area. An L-shaped station, it includes an upright refrigerator for holding cakes and other desserts. While Sturm developed the recipes for these desserts, for consistency’s sake a third-party kitchen makes the sweet treats.

The section of the L that runs 90 degrees to the rest of the line contains a worktable for plating desserts. Beneath the table sits an undercounter freezer that holds chilled forks and ice cream. One small change at this station involves how staff handle the ice cream scoopers. Previously they were kept in a small well with continuously running water. Now that well is heated instead.

“To be better stewards of the environment we went with a unit that’s heated so you don’t have to change the water constantly,” says Sturm. “The heat of the water is the pasteurization, so you don’t have to worry about bacteria growth.” Following this worktable (but still part of the pantry) sits a refrigerated table where culinary staff prepare some appetizers and specialty salads.

After the turn in the station’s L comes another refrigerated table that holds additional salad ingredients. Here the designers again used the newly available vertical space. Instead of storing salad greens in the refrigerated table, they’re held in a wall-mounted lettuce refrigerator with a divider that can hold two different lettuce mixes.

This change, says Sturm, contributes to a shorter line and helps the restaurant cut its total footprint by a few hundred square feet. “Because we shrank a little bit on the line, I didn’t have the drawer space for the additional lettuce. [The lettuce refrigerator] allowed us to use the wall more efficiently to access the lettuce and reduce our cooler size in that area.” 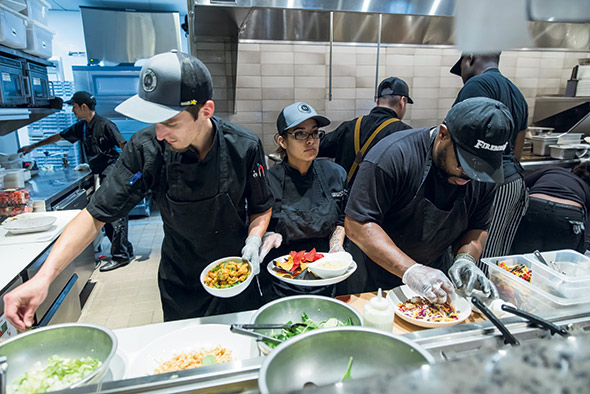 Staff assemble salads, desserts and some appetizers at the L-shaped pantry station.

Following the pantry station is a small hand sink, then the expo station, which includes another refrigerated worktable holding garnishes, toppings and other finishing touches. The expo is the literal center of the kitchen, with dishes coming from all directions to that spot. One small change to expo, Sturm notes, was a slight widening of the expo window, giving team members more room to stage orders.

After the expo station comes a steam table holding sauces, au jus, mashed potatoes and other hot items. Staffers at this station typically receive entrees (including steaks, seafood and burgers), add their hot items, then pass the plate to expo for finishing.

At the end of the dining-room-facing line sits the grill station, which includes several pieces.

The restaurant’s wood-fired grill, naturally, serves as the heart of this station. The grill actually shrunk to 57 inches from 72 inches in the new prototype. Practically speaking though, no cooking space was lost, says Sturm. “Before, we were using a larger grill and using a third of it just to rest steaks. What we discovered is that we could go with a smaller grill and a small table to rest steaks. That obviously reduces the money for the grill but also how much hood space we need.”

While the small table sits between the grill and the steam table, on the other side of the grill resides a worktable with refrigerated drawers below for holding grill items like steaks, seafood and chicken. Line cooks use the worktop to season and perform any other necessary prep before placing food on the grill. A second undercounter unit sits 180 degrees from this table and holds lower-volume grill items.

The grill marks one side of the production kitchen. The other side contains the bulk of the restaurant’s cooking equipment. While splitting hot-side equipment like this is unusual, says Sturm, it makes sense for the way Firebirds has all its food flow to the expo station.

This line starts with an undercounter freezer holding french fries. Next comes a pair of fryers which staff use to cook fries, onion rings and fish for crispy fish tacos. Firebirds holds these items in undercounter drawers that sit below a flattop grill next to the fryers.

The flattop itself measures five linear feet and culinary staff use it to make items like crab cakes and seared tuna, as well as to toast buns. Previously, Firebirds had two separate flattops totaling five feet separated by a rolling rack holding buns. The restaurant now stores the buns elsewhere, allowing Firebirds to combine the two units.

After the flattop comes a half-size sheet pan rack with a stainless steel top that holds cooked onion rings and fries, followed by the saute station. This station makes use of the flattop undercounter refrigeration as well. It also has its own refrigeration in the form of a cold table with wells. The wells hold everything from blanched pasta to meatloaf to vegetables to sauces. Saute pans and dry ingredients are held on shelves above the table.

In the previous design, says Sturm, this table had a larger work surface that held a row of six single burners. The chain has moved away from that approach. “From an efficiency standpoint it was pretty good because all the ingredients you needed were right behind the burners. From a practicality standpoint, guys were reaching over hot burners,” he says.

Instead of this row of single burners, the new design specifies an eight burner rangetop next to the refrigerated table. Staff use the convection oven below the burners to finish items like meatloaf and sesame salmon.

While this marks the end of the production kitchen, Firebirds features hot equipment in its prep area, as well. This includes a double-stacked convection oven for baked potatoes, bread, bacon and other items; a four-burner stove that staff use to prep vegetables and pasta; and a tilt skillet for soups, sauces and Firebirds’ signature lobster spinach queso.

The prep area remains essentially unchanged in the new design. The chain’s storage space has gotten an overhaul, though. Walk-ins moved from the interior to outside of the building (though flush with the exterior wall), which Sturm says saved about 300 square feet of space inside.

Firebirds currently has stores in 18 states. Though most of these are along the Atlantic Coast, it also has restaurants in the Midwest and as far west as Arizona. The chain is currently exploring expansion into Texas, Louisiana, and Colorado as well as a few other states. Its focus will be on “prime suburban markets with average household incomes of more than $75,000,” says the company.

In these markets, Firebirds believes the new design will attract not just couples and families but people out for a good time, including happy hour guests and those celebrating special occasions.

Firebirds at a Glance