Everyone, from seniors to 7-year-olds, loves a well-made sandwich. It remains a popular go-to item for many. In fact, nearly half of all consumers report they ate a sandwich “in the past day,” according to the 2017 Sandwiches Keynote Report from research firm Datassential. Many people reported eating sandwiches several times a week. 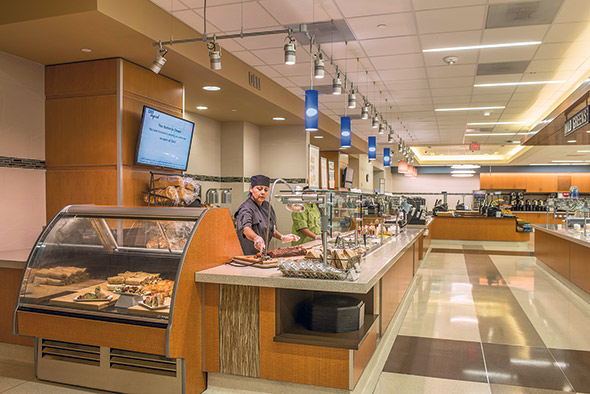 With nearly 70 percent of restaurants across the country offering sandwiches, according to the Datassential report, they are a well-entrenched menu staple. And, despite their conceptual simplicity, sandwiches offer virtually limitless opportunities for innovation and differentiation from concept to concept and customer to customer.

More than two-thirds of all sandwiches purchased at restaurants are either completely custom made or modified from an existing menu item, according to Datassential. In fact, more than a third of consumers say they choose sandwiches over other foods for customization purposes.

Terry Pellegrino, a principal at Minneapolis-based design consultancy Rippe Associates, notes that most deli/sandwich operations fall into one of two primary types: QSR-style assembly lines, from which customers can pick and choose ingredients to completely customize their sandwiches, and operations set up to produce chef-developed sandwiches that guests can modify somewhat to suit their personal tastes.

“In the case of a college campus or healthcare dining facility with multiple venues, I encourage clients to offer both types,” Pellegrino says. “Each has its benefits and each style influences how we organize those stations.”

Both, however, increasingly rely on a mix of both hot and cold sandwich options. Hot sandwiches make delis and sandwich stations more universally popular year-round, while cold sandwiches suit the growing demands for takeout, grab and go, delivery and catering. As such, says Pellegrino, “We have to figure out ways to incorporate hot sandwich equipment and make procedures fit into the flow of these stations.”

That flow centers on enabling seamless, efficient sandwich assembly from the point of purchase down the line to the point of delivery to the customer. Many traditional sandwich station designs feature a customer-facing assembly line, with fresh ingredients on display, supported by a back counter that stages heating equipment such as steamers, toasters and panini grills.

Such has long been the case at 1,000-plus-unit Firehouse Subs, where hot sandwiches featuring meats and cheeses steamed to order and served on freshly toasted rolls are the specialty of the house. Beyond upgrading to faster, more efficient equipment along the way, the Jacksonville, Fla.-based chain has changed little about its sandwich station design since it opened the first unit in 1994. 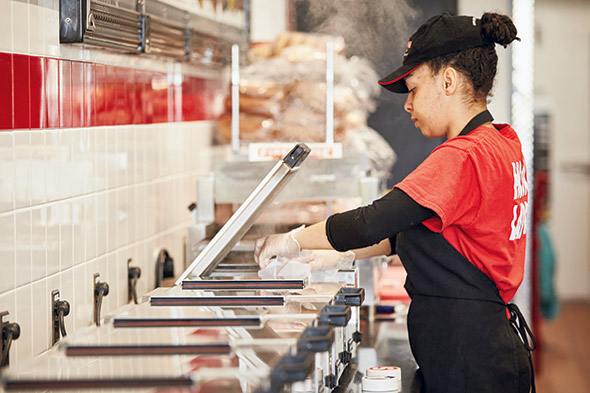 Rich Goodman, vice president of operations services at Firehouse Subs, says a typical unit’s prep line organization starts with the customer at the far end of the counter near the registers. The customer then works his or her way back toward the front door.

“The first crew member assembles the meat and cheese and then goes back to place it in a steamer,” Goodman says. “It currently takes 2 minutes and 45 seconds to steam the ingredients. The toaster is on the back line too. While the proteins are being heated, the bread is toasted and sent back to the front line to be dressed while crew members engage with guests and handle customization requests. The dressed bun is then slid further down the line, the proteins are removed from the steamer and added to the bun, and the sandwich is either plated for dine-in or packaged for takeout.”

Save Steps, Bring Heat Up Front

Goodman notes the primary goal from a production efficiency standpoint is to maximize guest engagement and minimize the number of steps required for crew members to access what they need. To that end, and to better respond to increasing needs for speed and convenience, the chain is now making some changes to its sandwich station design.

The introduction of more efficient toasters and new steamer technology will shave precious seconds off the steaming process, according to Goodman. In addition to being faster and more programmable, the new steamers also take up less space.

“They’re stackable and have drawers,” Goodman says. “We’ll have the same capacity as we currently do — eight separate steaming cavities — but need half the amount of space. It will get us a lot closer to the ergonomic kitchen of the future because it will minimize employees’ need to walk from station to station. When we go to this vertical steamer station, employees can be guest-facing and have everything almost within arm’s reach. The absolute ideal situation is for the employee to be able to stand in one spot and be able to reach almost everything. I don’t know if we’ll ever get 100 percent there, but as we move forward our goal is to always be reducing steps.”

Pellegrino’s favorite sandwich station layout flows from a display of bread selections to meats, cheeses and any other ingredients that might require heating. Next, whenever possible, she positions heating equipment next to, not behind, the proteins.

Pellegrino adds that properly incorporating heating equipment into the front-facing sandwich make line requires containing the heat the equipment generates, which keeps the adjacent ingredients fresh. “That’s a lesson we learned the hard way,” she adds. “Some of those ovens put heat out on the sides, so we found it’s a good idea to put protective glass dividers up to ensure that hot air isn’t being blown onto the cold food.”

To-go orders currently funnel through the same sandwich make line as all other orders, although Goodman foresees the day when Firehouse Sub might establish a dedicated line for carry-out sandwich assembly.

“That end of the business is growing,” Goodman says. “Takeout already comprises 52 percent of our total sales. That’s a big shift. Just five years ago, we were at 54 percent dine-in and 46 percent takeout. If we hit 60 or 65 percent takeout, the rationale would be pretty strong for going to a split kitchen system to ensure the greatest efficiency. We know from recent research that while taste is No. 1 in customer’s minds, speed is a close second, so we’ll be working hard to make continual improvements in that area.”