The road hasn’t always been smooth but food trucks continue to flourish with new brands, mobile extensions of brick-and-mortar restaurants and catering operations.

Eric Silverstein’s food truck business has undergone an evolution since launching eight years ago. The former attorney’s original plans to open a restaurant went in a new direction when the recession hit. He credits his sister for pushing him to take the plunge and start The Peached Tortilla food truck concept in Austin, Texas, in 2010.

Silverstein compares his food truck journey to a seed that has sprouted many tree branches. “I started with a leased truck, because I didn’t know anything about maintaining it. Then I built two trucks, which became a thriving catering business,” he says. 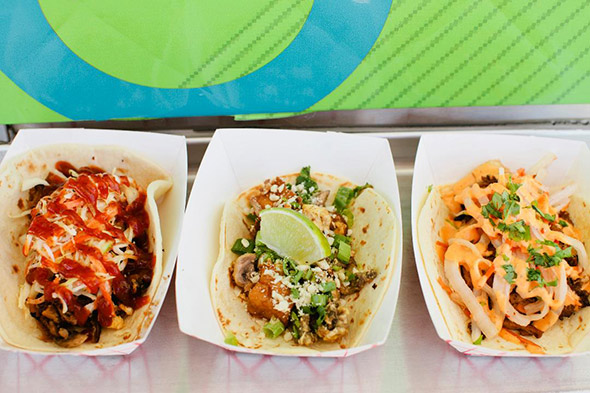 In 2015, Silverstein was ready to move forward with his initial plan and built a 2,500-square-foot restaurant. A recent expansion transitioned that into the 4,500-square-foot Peached Social House, which includes a catering kitchen, 100-seat event space and offices. In March, he will open his first kiosk restaurant at the airport in Austin.

For Silverstein, the food truck business was a jumping off point for something bigger. However, not every food truck aspires to expand into full-fledged catering or a brick-and-mortar location.

Matt Geller, president of the Los Angeles-based Food Truck Association, estimates 2017 final numbers will show mobile food vending to be a $2.5 billion market in the U.S. “This is compared to an estimated $600 million segment in 2011,” he says.

Coming into its Own

Richard Myrick, editor-in-chief for mobile-cuisine.com and author of “Running a Food Truck for Dummies,” started monitoring the food truck segment in 2010. At that time, he was working out of Chicago, which had some of the most stringent rules and regulations regarding the operation of food trucks.

“Back then, it was difficult getting trucks into certain cities, and Chicago, along with other cities, was not keen on allowing food truck operators to cook on board,” Myrick says. Chicago’s requirements became less restrictive around 2011. The market grew quickly during the summer of 2011, he says, increasing from 18 food trucks in Chicago at the start of the summer to roughly 40 by summer’s end.

Part of the credit for the rampant growth of food trucks goes to the evolution of food truck cuisine. What started as mainly Mexican fare, such as tacos and burritos, pizza and sandwiches, became a virtual smorgasbord of food types, ethnic fare, signature offerings and high-end gourmet dishes. Yet, because of space and time constraints, these menus generally focus on six to eight options total.

“Some trucks have larger menus, and it depends if it’s just handheld or plated food being offered,” says Myrick. “The key for food truck owners is to determine a target market and plan the menu based on demographic preferences.”

As with brick-and-mortar restaurants, food trends tend to be regional. According to Geller, taco trucks are more prevalent on the West Coast, while the East Coast sees more deli fare, and southern states have a proliferation of barbecue.

Not an Easy Road

Even with more relaxed regulations, food truck operators must regularly contend with a number of hurdles. Oversaturated markets make it even more challenging to create a presence or make it difficult to secure a place to set up a food truck for business. And the winter months in states like Minnesota can put a damper on business.

“I put in the time and was willing to suffer more than most,” Silverstein says. “When I started my business, I didn’t take a paycheck for two years and thought outside the box.”

Restrictions vary greatly by state and city and navigating them can be challenging. For example, some states, like California, require all the food production to occur inside the truck, which can limit menu development, says Myrick.

Some big cities, like Chicago, have rules governing how close a truck can operate to a brick-and-mortar restaurant. Other towns restrict food truck businesses to private events.

Despite these challenges, food trucks continue to persevere. “There is still a stigma in some areas, but it has helped that many brands and restaurants use food trucks,” Myrick adds. “And even though there are some limitations from a health department perspective, I cannot think of any cuisine type that hasn’t been offered by a U.S. food truck.”

Gearing Up for Success 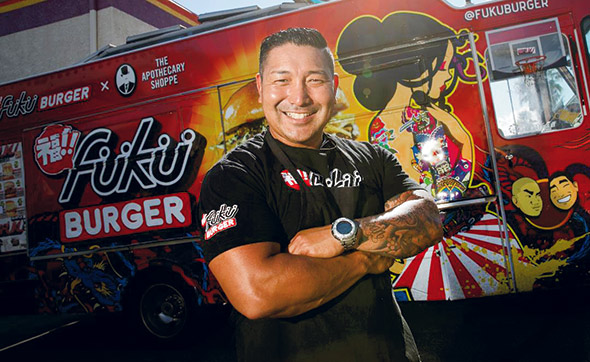 “Being in the restaurant business for 27 years, I thought it was genius,” Fukunaga says. “Rather than copying what others were doing, as an experienced restaurant operator, I wanted to see what I could do to raise it to the next level.”

Noticing customer service often took a back seat among food trucks, Fukunaga set out to exceed guest expectations with his Las Vegas-based Fukuburger food truck. “If I can make a $10 transaction seem like a $15 or $20 experience, customers will come back,” he says. “But saying running a food truck is a lot of work is an understatement.

“The failure rate is so high, maybe higher than restaurants,” Fukunaga adds. The non-glamorous aspects of a food truck, such as cleaning and the brutal working conditions, make it a love it or hate it type of venture.

Catering represents a bright spot in Fukunaga’s food truck business, accounting for 10 percent of his business to date. “Private catering is the most lucrative side of this business right now, due to the amount of time put into it and profitability.” 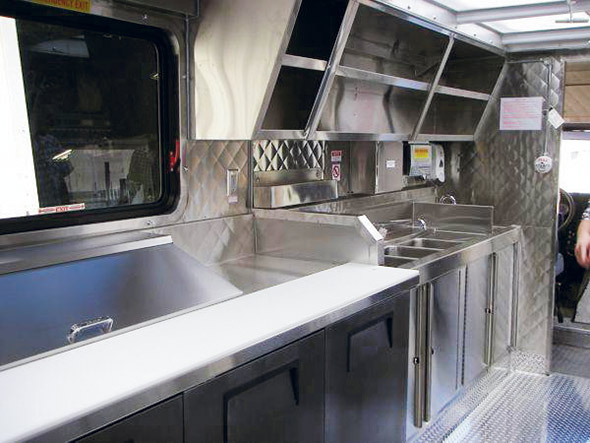 With tight footprints, food trucks like Fukuburger get creative and use every inch possible.

Silverstein has also increased his emphasis on catering as a growth vehicle.

The Food Truck Association’s Geller agrees that catering presents a growth opportunity for food truck owners. “Catering also has become a big money maker for food trucks, but the challenge initially was feeding a large number of people at one time quickly,” he says. “With today’s setups, staff can scoop and serve faster and more efficiently than in the past.”

In addition to state and local regulations, equipment presents a unique challenge for food truck operators. “A company can make an NSF-certified oven for a restaurant, but what happens if it’s shaken around in the back of a truck and running on propane or natural gas?” says Geller. “In some cases, food truck equipment operating standards are outside of foodservice equipment manufacturers’ wheelhouses.”

Some companies specialize in equipment for food trucks, but again, local rules vary. “For example, California has strict regulations as to what equipment can be on a truck compared to Texas, which is very lax,” says Geller. In the early years, do-it-yourselfers would simply modify equipment for use in a truck, reinforce it and strap it down.

Fukunaga initially wanted an open flame charbroiler in his truck. However, regulations limited him to a flat grill. Additional equipment includes a steam table, low-boy refrigerator and freezer.

“Lately, I’m seeing many trucks still using standard equipment, but more thought is put into the line and its efficiency,” says Myrick. “Most food trucks are lucky to have a 30-inch service aisle, so if you have more than three people working at a time, there’s no space to move around.”

Since food trucks still represent a relatively new segment, many operators use whatever equipment they have on hand. “It may take the next generation of food truck owners to work with manufacturers to make sure equipment works in trucks, whether it’s the types of casters or stabilizing straps,” says Myrick. “If manufacturers can shrink the size but keep the volume capabilities the same, that would help truck owners. Still, with a small footprint comes menu limitations.”

“Early on, there wasn’t a lot of maneuverability, but now more people know how to retrofit these trucks with different equipment,” Fukunaga says.

“I still think the industry has a lot of morphing to do,” says Myrick.

What to Weigh When Purchasing Food Truck Equipment

Keep in mind, the more powerful the blender, the more expensive it will be, so calculate automation correctly.Take noise factors into consideration. More power and faster blending speeds mean higher decibels. Covered blenders offer a quieter solution.Because blenders work with electromagnetic waves, this equipment can create excessive heat in small spaces. Ensure correct ventilation or the heat may transfer back to the blender and cause damage.Consider blender placement, ingredient placement and sink location for rinsing the blender. All three impact production efficiency.

Today’s countertop cooking equipment offers a variety of options geared for smaller footprints, such as griddles, grills, fryers, ovens, induction units, microwaves and toasters.Smaller equipment geared for specific production needs also is available, including countertop steamers, tortilla grills, waffle makers, gyro machines, crepe griddles, sandwich grills and rice cookers.With space at a premium in this segment, choosing equipment that can prepare more than one menu item or large amounts of a main offering is essential.Consider recovery time in relation to speed of service.

Low-boy refrigeration, or low-profile refrigerators, include undercounter and worktop units or any equipment that is horizontal and low to the ground. Chef bases and refrigeration equipment stands also fall into this category.Space considerations are key, as this type stands 36 inches tall, with 28- to 73-inch widths available. Operators can choose from one to three doors, depending on the application.Low-boy units are ideal for food truck use, as these models have accessible compressors that ensure proper airflow, despite being boxed in from all sides.Operators requiring additional workspace should consider a worktop type, which has a 40-inch-high surface on top designed for light food prep or storage.Chef base refrigerators feature two, four or six drawers and have reinforced steel top surfaces to hold heavy cooking equipment. Depending on production needs, this setup can increase efficiency in tight quarters.

Because improperly stored items can negatively impact a kitchen’s efficiency, choosing the right amount and type of units will ensure smooth workflow and optimum customer service.Assess the shelving environment, since different materials hold up better in certain climates than others. Some shelving listed as NSF may be suitable for dry environments but is not recommended for use in wet or humid areas.Trucks with uneven floors may require
storage units with adjustable feet.