Taking Health to Heart with Kardia Café and a Demonstration Kitchen 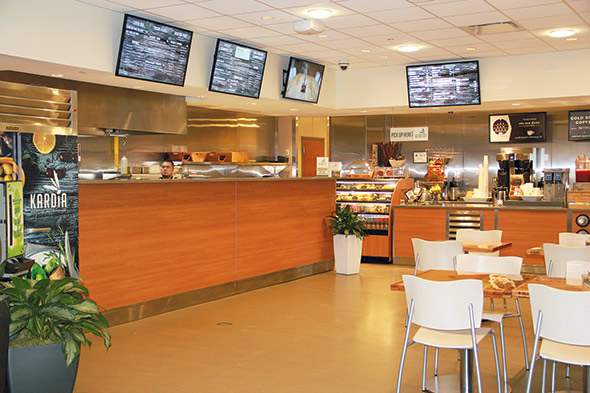 Designed in keeping with the hospital’s mission, two foodservice facilities focus on heart-healthy cooking and cuisine: Kardia Café and a demonstration kitchen.

Sitting on the bottom floor of the Heart & Vascular Hospital, which connects to the main hospital, Kardia Café features a Mediterranean-influenced menu (“kardia” is the Greek word for heart). “The restaurant features food that is so good guests have a hard time believing it’s healthy,” says James McGrody, director of culinary and nutrition services at UNC REX Healthcare. 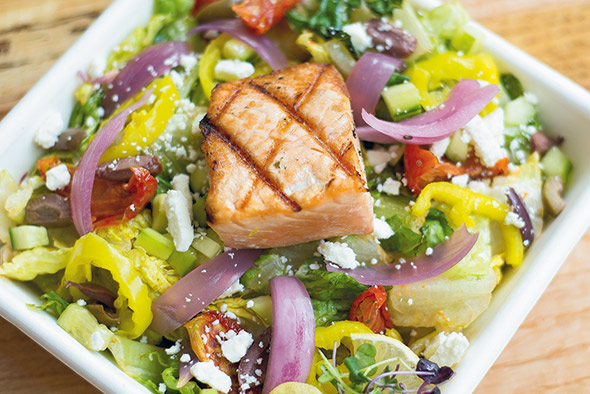 Customers arriving at the 1,255-square-foot restaurant see service stations with digital menu boards overhead listing the day’s fare. They approach a cashier or kiosk to place their orders, receive a numbered ticket and wait for their orders in an open area bordering the dining room. From that spot, guests can watch as three staff members cook and assemble food. After orders are filled — the goal is within three minutes — staff call out customers’ ticket numbers. The facility uses compostable takeout containers.

The dining area includes lots of natural light, with earth tones throughout. The wood-grained furniture and tables were made from oak trees that were cut down during the new hospital’s construction phase.

A small kitchen supports menu production, much of which takes place in view of customers. Food deliveries arrive at the main hospital. Staff then route menu ingredients on mobile carts through a hallway that connects the main hospital to Kardia Café. It’s roughly a four-minute walk. 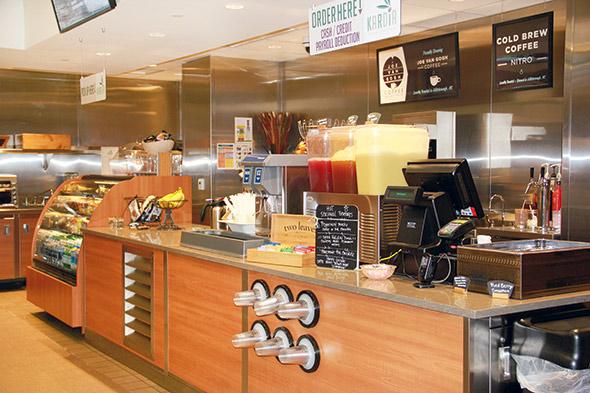 On-site staff store ingredients in a walk-in cooler and dry storage. They use a slicer to cut vegetables for soups, salads and entrees and make stocks and salad dressings using a food processor. This area also holds a 20-quart mixer, a conveyor toaster and pass-through refrigerator.

The warewashing station in the back of the house features a single-tank, ventless, high-temperature warewasher, a prerinse sink and a three-compartment sink.

On the hot line, staff make soup and stocks in two trunnion kettles, bake chicken and meatballs in a double-stack convection oven and saute menu items such as crab cakes on the six-burner range which has ovens beneath it. Across the aisle from the hot equipment, undercounter refrigerators hold ingredients within easy reach. Fryers are intentionally missing from this hot line and the main kitchen.

Staff prepare other menu items at a deli station, which contains large reach-in refrigerators with separate chilled rails on top to hold ingredients at the point of use. A soup/hot food station holds soups and menu items such as oatmeal for the customizable oatmeal bar. Staff use a griddle to prepare egg scrambles and French toast with wheat bread, which includes a Greek yogurt and blueberry spread drizzled with local honey and fresh berry sauce. The chargrill heats burgers, which feature a mixture of lamb and lean beef and are served with seasonal pickled vegetables, sweet-potato ketchup, roasted red pepper, eggplant spread and romaine lettuce. 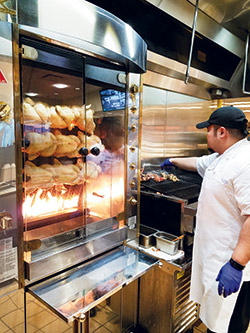 A refrigerated display case for takeout items sits to the side of the beverage station and offers wraps, salads and desserts. Take-home service comprises about 5 percent of Kardia Café’s sales.

In addition to Kardia Café, the Heart & Vascular Hospital opened a demonstration kitchen in March, located about 50 feet from Kardia Café. Attached to the Center of Innovation and Learning, the 100-seat demonstration kitchen serves as another way to promote healthy eating and support the hospital’s cardiac rehab program andwellness centers affiliated with UNC REX Healthcare. Employees, staff and community members can participate in lunchtime or after-work (around 5 p.m.) classes.

Instructors include dietitians affiliated with the wellness center and chefs including Ryan Conklin, CEC, executive chef for UNC REX Healthcare, and James Castellow, Kardia Café’s chef manager. “Schedules are communicated by the wellness center staff as well as marketing staff through social media and emails,” says Tara Freeman, catering and conference center manager. Nearly 10 one-hour classes have been offered since June, with greater class frequency in the works for 2018.

Food for the demonstrations comes from Kardia Café or the main kitchen. “Staff members place food on carts and walk them to the demonstration kitchen,” Freeman says. “We only have four undercounter refrigerated drawers so we bring the food in as needed.” 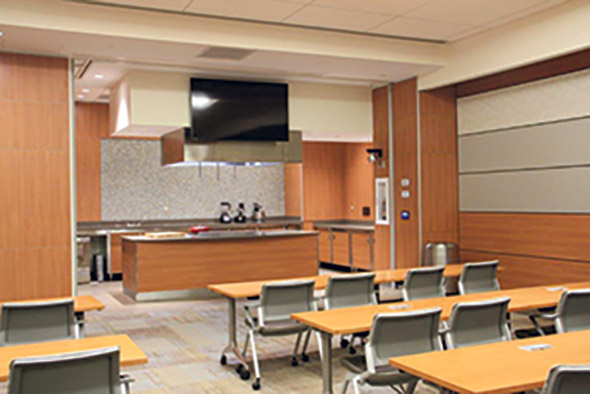 Above right: A digital screen sits above the preparation counter in the demonstration kitchen so participants can see chefs’ preparation in detail. Photo by Tara Freeman

Equipment that supports the demonstrations include six induction cooktops with an oven beneath, a food processor, one convection oven and a large exhaust hood. Cameras catch the action. Electronic faucets assist chefs so they can easily and quickly wash their hands while preparing food. An undercounter high-temp warewasher allows crew to clean pots, pans and utensils on-site.

“Soon patients will be able to access a video library so they can watch demonstrations from their hospital rooms,” Freeman says.

“Not many hospitals have this kind of facility, so it is very exciting,” McGrody says. “We plan to grow it more and more. We’ll also be creating a visiting chefs series featuring chefs around Raleigh to help promote some of the healthier dishes they serve in their restaurants.”

McGrody believes interest in the healthful cuisine has grown since the opening of the demonstration kitchen and Kardia Café. “Co-workers stop me in the hallways and ask about the schedules, so interest is building,” Freeman says. These two operations exemplify how a hospital team’s determination to place more emphasis on healthful food and education rather than sickness may indeed save lives.