Food quality has always been a big deal at Burrito Beach, a Chicago-based fast-casual concept founded by Greg Schulson in 1995.

Design? Not so much. Nonetheless, the brand did well in the competitive fast-casual segment, growing to five units with its kitschy beach and Mexican aesthetic. 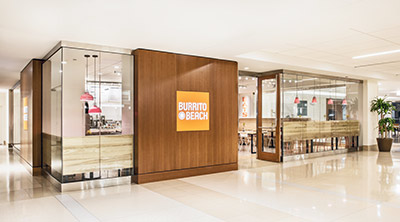 Burrito Beach’s new design starts outside, where a clean, contemporary facade invites guests in for an experience that better aligns with the brand’s focus on food quality and service. Photo by Anthony TahlierFor most of the past decade, Burrito Beach operated in a holding pattern. Its menu evolved, but there were otherwise no big changes and no new units. Three years ago, however, Schulson, whose family-owned Lunan Corporation is also a sizeable Arby's franchisee, began taking a fresh look at Burrito Beach. Food quality and service systems were enhanced, and sales started growing, with comps in 2014, 2015 and 2016 rising 12 percent, 12 percent and 14 percent, respectively.

Design became the next target; an effort to better align quality of food and service, value proposition and experience. Working with design firm Gensler, the company created a new logo and graphics and unveiled a new prototype at Burrito Beach's sixth unit, which opened last December in Northwestern Memorial Hospital's second-floor dining and retail pavilion.

"We took an objective look in the mirror and acknowledged that our brand perception, our curb appeal, needed work. We had a very dated look," Schulson says.

Measuring 2,000 square feet, the new prototype unit is a dramatic departure from the appearance and ambiance of legacy locations. The prototype design is clean and contemporary, bright and natural.

"We tried to take cues from what we see in the environment right now and to get away from some of the chaos of over-messaging," Schulson says. "People are looking for an oasis when they come for a meal. We wanted to create an environment with a lighter, beachy feel without being so literal about it."

While the new design differs dramatically from the legacy locations, attention was paid to creating subtle bridges between old and new. For example, one version of the new logo is round, like the old logo, to ensure it is recognized by existing customers. The overall color palette is new, but some colors from the legacy brand package were incorporated in new ways.

The new location also serves as the debut spot for a new menu segment — frozen custard and frozen yogurt. Positioned to one side of the front counter for maximum visibility, the dessert program helps boost sales throughout the day. "Some people come in just for a snack or dessert," Schulson says. "We designed a pathway for them to be able to go directly to that register if they're not ordering from the main menu. While somewhat separate, it really functions as an extension and offers flexibility depending on how traffic is flowing throughout the day. That second register area is also where we stage our takeout orders for pickup, which is a big part of our business."

The new counter design also focuses on maximizing cleanliness. Condiments and utensils, traditionally staged on the counter near the registers, were relocated to minimize clutter and promote a sense of calm.

Schulson says no major back-of-the-house changes were made but notes that the plan going forward is for all kitchens to be on full display.

Burrito Beach is now in the process of remodeling legacy locations with the new branding and prototype design elements. The first, a 500-square-foot unit in Chicago's Ogilvie Transportation Center, was completed this summer and has since seen sales increase by 20 percent.

"We're really happy with the prototype and haven't had to change anything," Schulson says. "The only thing we're doing differently is finding alternatives for items that were custom made for the first unit to ensure we got the right look and feel. Now, we want to do some value engineering and bring costs down."