Learn how a foodservice equipment and supplies dealer hard hit by the flooding and a restaurant chain continue to claw back from this historic natural disaster. 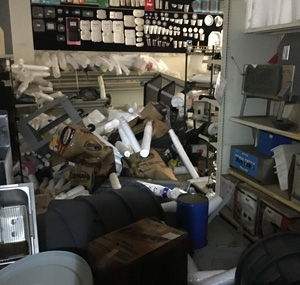 The flood waters from Hurricane Harvey rose to more than six feet and knocked inventory from the shelves at Kommercial Kitchen, a Beaumont, Texas, foodservice equipment and supplies dealer.

With its incredibly strong winds and seemingly relentless rain and flooding, it does not take very long for a hurricane to devastate an area. But the cleanup and restoration of any form of normalcy can take months or even years and will require continued acts of kindness and support. Such is the case for those members of the foodservice industry affected by Hurricane Harvey. 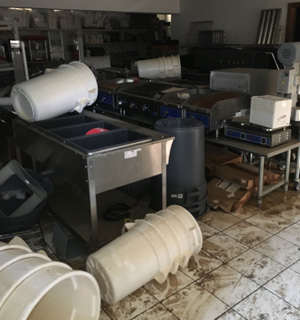 Kommercial Kitchens, a Beaumont, Texas-based foodservice equipment and supplies based dealership experienced about six feet of flooding that kept its owners away from the business for roughly 10 days, according to Shannon Woodard, a company vice president.

Given the extensive nature of the flooding, Woodard used an airboat to visit his business to assess the damages before the waters receded. Last week he and others from the business, including his father who founded the company in 1991, finally were able to get inside the dealership.

“We just accessed our building two days ago,” Woodard said during an interview with FE&S late last week. “So we are in the process of emptying it out and setting up temporary offices.”

Kommercial Kitchens had dealt with flooding in the aftermath of Hurricane Ike in 2008. But even then, the flooding only came to the front door. “I could still drive in back then,” Woodard recalled.

Even getting to the business is an adventure these days. Normally, it takes Woodard 20 minutes to drive to his business. Due to the roadblocks, flooding and other storm-related detours, Woodard had to take the back roads to get to his business, lengthening his trip considerably. “I could not leave the area I live in for five days because a bridge had collapsed and the river had flooded,” Woodard said. 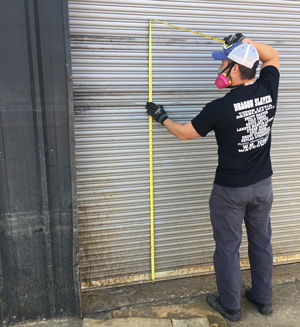 A worker measures how high the floodwaters rose alongside an exterior door at Kommercial Kitchen. The waters rose to roughly 74 inches at the Beaumont, Texas, dealership.The timing of Hurricane Harvey could not have been worse for Kommercial Kitchens, which supplies paper and disposable items, among other things, to a number of schools in the area. “School was starting that Monday (Aug. 28), so our whole warehouse was filled and ready to deliver. Now it looks like a bomb went off,” Woodard said. “We had about $770,000 in inventory and, best case scenario, about $75,000 of that is salvageable. All of your inexpensive stuff sits up real high.” 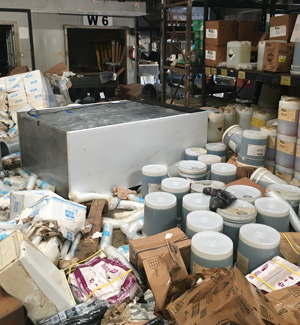 The flood waters ravaged the warehouse at Kommercial Kitchen.

The dealer has 17 employees, 7 of which were helping with the cleanup. “We have a driveway filled with little forks and cups,” Woodard said.

Some of the dealers’ employees had evacuated prior to the storm and had yet to return to the Houston area. In addition, the homes of seven Kommercial Kitchens’ employees flooded. “They have to deal with their personal issues as well as professional issues,” Woodard said.

As the cleanup continues, Kommercial Kitchens strives for some form of normalcy. “First thing, is to get our offices up and running. We installed a job Friday night before the storm and have yet to bill that job,” Woodard said. By the end of last week, Kommercial Kitchens had restored its computer systems, a significant step toward resuming business operations.

Over the weekend Woodard was planning on installing a job. Of course, that was going to be more challenging than usual given that he lost many of his tools in the flooding. Luckily one of the dealer’s delivery trucks survived the flooding.

What’s the future hold for this first-generation family business? It’s too early to tell. “We had bought some land and were going to build a building at the end of this year,” Woodward said. “But we hope to stay open.”

Like so many others affected by Hurricane Harvey, Woodard was grateful for the help other members of the foodservice industry offered not only to him but his employees, too. “One rep group just left. They helped us clean up and brought us lunch,” he said. “Another group came down the first weekend and helped us clean up our employees’ homes.” 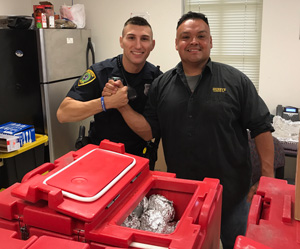 Ukiah Ramirez of Dickey’s Barbecue (right) receives a hearty thank you from one of the first responders who the barbecue chain has fed in the aftermath of Hurricane Harvey.

Indeed, emerging from natural disasters such as Hurricane Harvey is a torrent of good deeds done by folks representing all segments of the foodservice industry. Take, for example, David Montoya and Shaun Martin. Both are Dickey’s Barbecue franchisees from La Junta, Colo., and Garland, Texas.

The duo got to know one another while attending Dickey’s Barbecue University classes. By attending these classes they also learned of Barbecue, Boots and Badges, Dickey’s non-profit arm that works with first responders like police and fire departments.

Martin also has a 30-foot barbecue trailer that includes everything an operator would need to feed a crowd, including a smoker, fryers, refrigeration and even hand sinks. “It’s a self-contained barbecue kitchen,” said Nathan Wheeler, executive director for charitable activities for Dickey’s Barbecue.

So Martin and Montoya headed to the Houston area to help feed those affected by the storm and the first responders helping them. And they brought along a few of their team members to assist. The net result: they are feeding roughly 5,000 people a day, including 500 first responders. They plan to remain in Houston through at least the end of the week — Sept. 22, according to Wheeler.

Being able to feed a large number of people on a daily basis does not happen by accident. “It’s a conglomeration of a lot of efforts,” Wheeler said. For example, team Martin and Montoya set up shop outside of the Dickey’s location in the area that was closed for a while due to the storm. This provided a fixed point from which to work that had access to essential utilities.

Then there was identifying the best way to get the food to those who needed it. “We worked closely with a number of organizations in Houston, including the Red Cross, to make sure we are helping as many people as possible,” Wheeler said. “We try to set up shop where we can do the most good. We have not spent more than two days in the same spot. We have to make sure to get everybody fed.”

This approach allowed the crew to not only feed people from Houston but also those in coastal towns such as Rockport and Port Arnasas, also devastated by the storm. “We have been able to feed some people in those areas by working with the Red Cross,” Wheeler said. “We are feeding those victims but we are doing it North of where they were.”

Another key factor fueling Martin and Montoya’s efforts was the continued cooperation of Dickey’s supply chain partners and others in the community. For example, some suppliers have donated product, Wheeler said, while others have been flexible when it comes to shipping food. In addition, several businesses along the highway between Dallas, home of Dickey’s headquarters, and Houston, have donated refrigerated storage space, which helps. “We have refrigeration at the site and off site refrigeration locations, too,” Wheeler added. 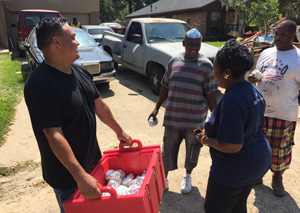 Dickey’s Barbecue, Boots and Badges organization is examining the logistical issues that surround doing something similar to help support the victims of Hurricane Irma. The chain did report that all of its Houston locations had reopened, although some may still be serving a limited menu.

Indeed, these are bitter sweet times for those assisting with the cleanup of Hurricane Harvey. The devastation of the storm is still startling but the foodservice industry response remains inspirational. “It’s the saddest and happiest part of my job at the same time,” said Wheeler.

He’s learned one important lesson from all of this: “Never under estimate the power of a community,” Wheeler said. “It’s a powerful thing when a community rallies together behind a specific cause. Our guests are a reflection of our communities and our country and everyone is pitching in.”