Bringing Healthy, Affordable Meals to Food Deserts and Beyond 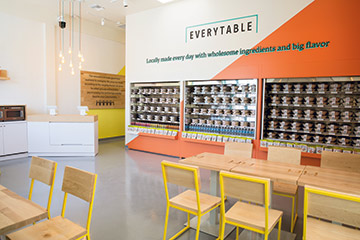 Launched last July in South Los Angeles, Everytable brings a healthy, grab-and-go restaurant/retail hybrid built around chef-developed foods to underserved neighborhoods at prices competitive with fast food. Polk and Foster had been working together at the educational health and wellness nonprofit Groceryships, launched by Polk in 2013. Since opening that first Everytable store last year, the duo has opened additional California units in downtown Los Angeles, Baldwin Hills and Santa Monica. A fifth unit is in development in Century City and the company plans to add more locations for 2018.

"Through Groceryships we were working in South LA, where per capita income is $13,000 a year and life
expectancy is 10 years lower than in more affluent areas. Food-related health issues there are off the charts," Polk says. "We kept hearing from parents that the produce we were bringing in and the cooking and nutrition education were great. But for single moms with four kids, two jobs and two-thirds of their monthly income going to pay the rent, what they really needed was something fast, affordable and convenient to help them feed their families. That got us brainstorming on a structure for a restaurant model that could bring healthy food to these areas, and the key was to be able to do it at a price point comparable to or even better than fast food." 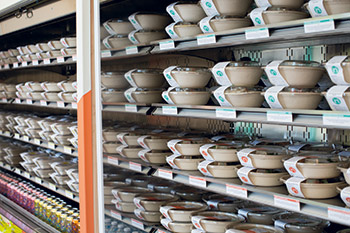 All menu items, which are prepared and packaged in a remote commissary kitchen, are displayed in refrigerated cases. Customers who choose to dine in can use microwaves positioned in the front of the house to heat hot plate dishes.The Everytable concept is unique on several levels, all of which work in concert to achieve the mission of making good, wholesome food available to everyone.

For starters, each location's menu pricing reflects the neighborhood in which it operates. An entree that sells for $4 in economically depressed South LA might cost $7 or $8 in Santa Monica. "We wanted to price as affordably as possible to serve those food deserts, but we also wanted to open in more affluent areas. So we have this beautiful variable-price model where every store is meant to be profitable, just differently profitable," Polk says. "That's the real power and innovation of the model. We're selling delicious, healthy foods and offering an incredible alternative to the usual fast-food or fast-casual meal, and it's faster and costs less. The average meal cooked at home is about $4, so all of a sudden, not only is this a great option versus traditional QSR or fast-casual restaurants, it's also a good option versus cooking at home. As a result, many customers use us as a restaurant while others come in and buy five, six, seven meals for the week."

To keep real estate costs down, Everytable locations are small — 500 to 700 square feet — made possible because all cooking and packaging occurs in a commissary kitchen. There, staff prepare and package fresh meals every morning for delivery to the stores.

The original unit is a 700-square-foot cafe-style store with 20 seats, the second location is a kiosk operation in a mall food court and the new Santa Monica, Calif., store operates inside a larger artisanal food hall. As the chain grows, Polk says, "We're finding different types of real estate opportunities, but what stays true is this idea of a small, very adaptable footprint and low overhead."

Given its grab-and-go format, each store might have just two employees per shift. Most stores operate seven days a week from mid-morning to between 7 p.m. and 9 p.m., depending on location. Roughly two-thirds of sales ring up during lunch.

Polk describes the design vision for Everytable stores as blending a sleek, health-food store aesthetic with the warmth and vibrancy of ethnic restaurants. The customer experience mixes aspects of retail and restaurants, but Everytable places a strong focus on hospitality. He says the most successful iterations of the concept to date are those stores that "feel halfway between a cafe and a store."

Customers who choose to dine in can use microwaves in the front of the house to heat hot plate items.

The company doesn't share revenue figures, but Foster notes that during a typical busy lunch rush at the original location, 200 to 300 meals will be sold over a one-hour period. "It's funny because you can be walking by the store and it doesn't look that busy. We'll ask the staff how it's been and they'll say it hasn't felt that busy, but then we look at the sales data and see that it's been one of our busiest hours ever," he says. "The way the model is set up, there are those periods of time where you're churning in a ton of people through the location, but they're just in and out so it doesn't feel like you're overwhelmed with volume."

Foster and Polk say after taking Everytable from 1 unit to 4 and from 20 employees to more than 60 in a matter of months, company focus in the near term rests on operational efficiencies and fine-tuning for future growth. By late next year, Everytable should be on track to hit 6 to 10 locations.

"We really just want to continue to improve the model, add on some nice new locations in the beginning of 2018, and hopefully be in a position where we can write our own story and decide how quickly we want to grow within LA and potentially other markets," Foster says. "We'll take it from there, but the goal is having locations across the country 10 years from now. We want Everytable to be a national company serving people everywhere."