Kip Serfozo Points Out the Merits of a Temporary Kitchen

To help minimize business disruption during a foodservice remodel or even a new construction process for an existing organization, foodservice operators often opt to go with a temporary kitchen. Of course, doing so represents more than just a “drag-and-drop” proposition.

Each situation requires analysis to find the proper combination of equipment to fit the available space. Kip Serfozo, managing director of Camacho, an Atlanta-based foodservice design and consulting firm, says other aspects — such as aesthetics — can also come into play when designing a temporary facility. 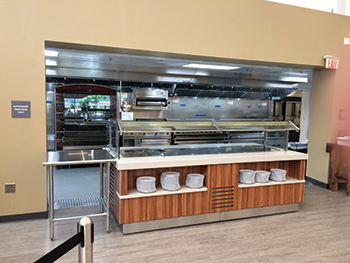 A temporary kitchen at Emory University includes enough cooking equipment to allow the culinary staff to produce the vast majority of the menu normally served in the dining hall at the Dobbs University Center.Serfozo points to his company’s recent work at Emory University as an example of how aesthetics and efficiency have to work hand-in-hand. Emory is a private institution located in Atlanta’s Druid Hills neighborhood, and serves about 15,000 students. The Dobbs University Center, or DUC, dining hall has been the foodservice operation on campus, says Serfozo. “There are other retail foodservice options on campus but this is the one where students go for their three meals a day.”

Serfozo terms the DUC kitchen as “dysfunctional,” having different levels that hampered worker efficiency. So a complete teardown and rebuilding of the Dobbs University Center provided an opportunity to redesign the kitchen for more efficiency, and to reconfigure the serving area to include more stations.

During the two-year stretch while the new building is under construction, a temporary facility called the DUC-ling, housing both kitchen and dining areas, had to be erected. On many campuses, students could simply be shuttled to other dining facilities on campus but, as Serfozo notes, the university “didn’t have any other dining hall to send them to. There was no way they could feasibly put them anywhere else.”

The DUC-ling features the expected range of kitchen equipment — combi ovens, charbroilers, rotisseries, fryers, griddles and tilting skillets — to allow the kitchen staff to produce, in Serfozo’s estimation, 90 percent to 95 percent of the DUC’s previous menu. But in this case, the ambiance and appearance of the facility were also important. According to Serfozo, the dining hall serves as a showplace for potential students visiting the Emory campus. “They use the dining hall as a means of recruitment when kids come, and they want to make sure they’ve got a state-of-the-art dining hall.”

The effort to make the temporary facility look upscale started on the outside. Emory’s foodservice management didn’t want it to look like a temporary kitchen, Serfozo said. The outside of the DUC-ling is white with graphics and the university name printed on it. “And it’s landscaped very well, which was important,” he adds. “The entrance is a nice entrance. When you approach a building, it’s got to look like it blends into the site.”

That concern about detail carried over to the inside. “They put a lot of money into finishes, and [into] the lighting in the dining room and serving area,” says Serfozo. “And all of the counters were pretty high-end looking.”

The emphasis on upscale design in the temporary structure has pleased Emory management, says Serfozo. “I know they were really happy with the way it looks, aesthetically. I’ve heard nothing but positive reviews on that.” The key to the success of the Emory facility — or any type of successful temporary facility — he says, is fairly basic: “You really have to think of it as a facility that is permanent. You can’t think of it as a temporary facility where you can [just] get by. You have to design it like you’re designing a new dining hall.”

Serfozo suggests, as a starting point, think about “the loading dock and how things are going to enter and exit the structure from a food and materials standpoint.” He recommends setting up the temporary structure more “like a typical building, where you’ve got a loading dock, and the compactor and waste areas in a good adjacency to the building. And because you’re moving so much food in and out, safety is a big issue. Make sure you’re not just throwing up some wood steps.”

“Understand how you’re going to clean the facility,” he says. “Make sure you’ve got all the [cleaning] equipment for the front of house and back of house planned out, and where that’s going to be stored.”

Estimating the size of the facility accurately is critical for success. “You don’t want to underestimate the amount of space you need for the serving area or seating, or for queuing,” Serfozo says. “I think most people tend to undersize the facility and that can be a big problem.”

To guarantee the success of a temporary facility, buy-in from all parties is critical. Serfozo suggests “getting the kitchen [crew] involved early and getting the whole team to the table. Sometimes projects don’t start out with all the stakeholders involved at the beginning, and that’s when things get off kilter.”