This sandwich shop counts on scratch cooking and fresh ingredients to make it a national player. 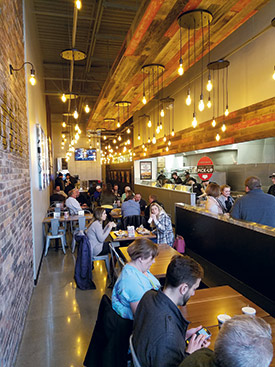 Capriotti's Sandwich Shop was serving whole, real foods before it was cool. The chain, today headquartered in Las Vegas, opened its first store in 1976 in Wilmington, Del., as the brainchild of founder Lois Margolet.

"Lois was way ahead of her time with respect to using real food," says Capriotti's CEO Ashley Morris. "At the time in the 1970s, when processing had become very popular, she moved away from that. We use real turkey that's slow cooked on premise every single day. The roast beef that we use is true top round with one ingredient, beef. We cook it in-house every single day. The meatballs are made from scratch, the stuffing is made from scratch, the coleslaws are made from scratch and the vegetables are chopped fresh every day and never re-used. Everything is super high quality and all natural. That was really the difference between Capriotti's and the rest of the competition that was out there."

This commitment to quality earned Capriotti's many loyal customers over the decades. Among them was Morris, who first discovered Capriotti's during his college years and remained a self-described "raving fan" of the food as he entered the professional world.

Finding himself eating at Capriotti's almost every day, Morris eventually decided he wanted to be more than a customer. In 2004, he and his partner, Jason Smylie, became Capriotti's franchisees, starting with just one restaurant. Despite having no real foodservice industry experience between them, that first restaurant was successful enough that they added one store to their portfolio each of the next two years.

With those three stores thriving, in 2007, Morris and Smylie decided they wanted to take their work with Capriotti's to the next level. This proved difficult, though. While most Capriotti's franchisees maxed out at three to four locations, the partners had something much bigger in mind. "We were able to invest the right amount of money and earn the right ROI that after 3 [stores] I wanted to do 25 more. I just couldn't get the owner comfortable," says Morris.

Frustrated, Morris eventually proposed buying Margolet out entirely. After getting external funding, "we had a meeting, sat her down and wouldn't take no for an answer until we got a price." That transaction closed in January 2008.

As CEO for the past nine-plus years, Morris has built the foundation for a successful national franchise, much of which was lacking. This includes professionalizing operations, such as investing in a modern POS system and locking down supplier contracts; developing a robust franchise sales and support system; and upgrading the restaurant design.

Walking into a Capriotti's, customers encounter a space filled with warm wood tones and splashes of red, along with several modern design elements.

Reclaimed wood pops out as a key element. The design sporadically inserts the material into spots on the walls, ceiling and pony walls that separate the ordering line from the dining area. Every few planks, Capriotti's has painted a piece of wood its signature red, adding a touch of energy and color to the space.

Though more expensive and harder to source than wood in its first use, Capriotti's leadership finds reclaimed wood compelling enough to be worth the investment — at least for now. "We know that it probably doesn't have a 10-year shelf life. It probably has more of a six-to-seven-year shelf life before design trends move in the other direction, but right now it's what people like," says Morris. "We feel it's still in that relevant, current, new-cool finish [stage]. We may build with it for a few more years, then the pendulum may shift and we may redesign again." 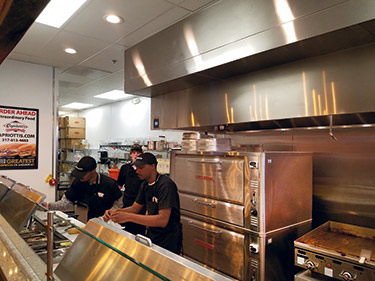 Capriotti’s open kitchen emphasizes the restaurant’s made-to-order offerings. Against the back wall, the oven cooks more than 100 pounds of meat per day.Capriotti's open kitchen design adds energy and activity to the space while also communicating to customers that Capriotti's food is fresh and made to order.

Notably, Capriotti's does not use one set design for the chain's kitchens — or even two or three designs. Instead, Morris estimates that the chain has more than a dozen
different kitchen layouts.

"There are a few efficiencies we have to solve for," says Morris. "The most important is the maximization of space. We try to keep our kitchen [and back of the house] around 1,000 square feet and keep the rest for the [dining area]. As we manipulate the restaurant, we want to maximize seating."

Staff also use the sandwich tables to assemble ingredients for the chain's hot sandwiches, which comprise about half of Capriotti's sandwich offerings. In full view of guests, culinary staff cook the hot sandwiches on a six-foot, gas-fired griddle.

Also in full view of guests, a salad table sits near the point of sale station, where culinary staff make salads to order. The POS counter also houses a pair of bain maries, in the chain's signature red color, that staff use to serve Capriotti's house-made soups, which include chicken noodle, clam chowder, and Maryland crab. Team members add meats, hand-cut veggies and other ingredients to a stockpot and cook the soups right on the griddle. After the soups cook and cool, staff portion them for reheating in the bain maries. 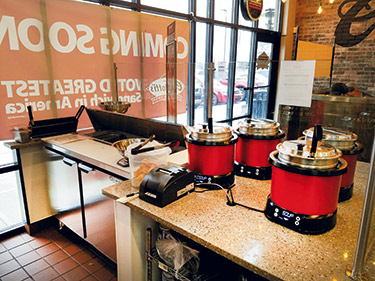 House-made soups are held in bain maries by the POS station, while salads are assembled at a nearby small salad table.Prep work plays a key part in Capriotti's success. As part of the operation's real food roots, Capriotti's team members do much of the work that other chains have done for them.

This means prep at Capriotti's begins each day at 8 a.m. and requires as many as four people, significantly more than shops that get their meats, cheeses and other ingredients in sandwich-ready form.

While Capriotti's uses a combination of smallwares and tabletop equipment for most of this work, its large oven serves as the heart of the chain's prep efforts. Located in the open kitchen, staff use the oven to slow roast turkey and beef, and bake meatballs.

At five-feet wide and six-feet tall, the oven can cook up to eight 25-pound turkeys or roast beefs at a time. Given that a high-volume store can use more than 200 pounds of meat per day, such a high capacity unit is necessary, Morris notes.

Capriotti's relies on a 12-hour cooking process for its proteins, so most stores cook their proteins overnight, then hand-carve them the next morning. Depending on their individual needs, other stores cook during the day, while some of the system's busiest restaurants cook turkey and beef almost 24 hours a day, Morris says.

With such high volume, Capriotti's receives meat and produce shipments twice per week, while it gets fresh bread deliveries daily. The chain relies on a walk-in cooler for holding roast beef and produce, while its walk-in freezer holds turkeys and frozen desserts, like cookie dough received in puck form.

Capriotti's has spent the past few years building up its store count and now has more than 100 locations. It projects selling about 50 franchises in 2017 and upward of 100 in 2018. This trajectory, Morris says, should have Capriotti's reach 500 stores by 2025.

"We've surpassed the 1.0 lifecycle of an emerging brand and have moved into the 2.0 growth phase," says Morris. Target markets include metropolitan areas with populations between 1.5 million and 2.5 million people where Capriotti's can build 10 to 15 stores.

Capriotti's primary franchisee requirement is that franchisees have the same passion for the brand and for the product that led Morris to first open a single Capriotti's store 13 years ago.

"If you don't love what you sell, you're never going to sell a lot of it," Morris says. "[Capriotti's] is a little bit of a culty brand. The food is so good and so different that people fall in love with the product. First and foremost, we want franchisees who have a true love and passion for our food."