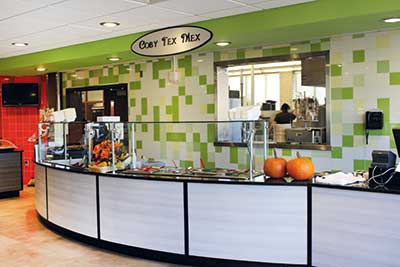 The academic tradition of the State University of New York (SUNY) College of Agriculture and Technology at Cobleskill spans nearly 100 years. Today, more than 2,500 students are enrolled in the 52 associate and baccalaureate degree programs. The renovation of the front of Prentice Café is the last phase of a 5-year, $1.3 million campus modernization project.

Four years earlier the back portion of Prentice Café was renovated to include Not Just Grilled Cheese (a deli) and a cooked-to-order station featuring Pasta Perfect and Wokery (Asian). The front had become old and unappealing to contemporary students' tastes. Culinary staff worked behind a wall, and the menu was tired. Student surveys revealed a desire for a traditional pizza shop and Southwestern station.

"We wanted to make more efficient use of the space, place chefs in front of the guests and offer better quality products that are fresh and often cooked to order," Marhaver says.

The existing operation was shut down in May 2016 so renovations could be done over the summer. The new cafe opened in August 2016 before students started the fall semester. "We had only seven weeks after placing the equipment order to receive and install it," Schwandt says. 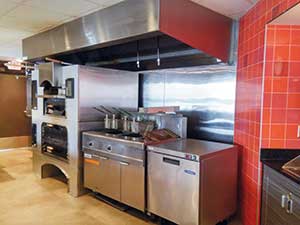 The oven, fryers and refrigerator at Hand Tossed Pizza Shop support preparation of pies for sale in the shop and delivery to the dorms.To modernize the front area and give it a contemporary menu, the entire space had to be gutted and reconceived with new serving, preparation and cooking equipment. Stations feature storage and space for production, prep and cooking so team members can work efficiently during slow and peak traffic periods.

"The 50-year-old building's structure wasn't in bad shape, so we didn't have many challenges with infrastructure," Marhaver says. "We placed the hood where it needed to go and vented the exhaust to the roof without major difficulty." One of the most expensive parts of the project — running propane through the building from the outside to the pizza oven and fryers — cost $20,000.

As customers walk into Prentice Café they see a brightly lit space with impressive signage at each of four stations: Hand Tossed Pizza Shop, Coby Tex Mex, Burgers & More and Beverages. "Each of the front-line stations contains its distinctive nonporous stone and plastic laminate cabinetry and built-in electrical panels that electricians hooked up to power the front lines," Schwandt says.

"Early on in the preparation process, we sent the facilities team templates, and then I came over to Prentice Café and laid them on the floor to show where the casework was to lie," Godfrey says. "This way the facilities team knew where to bring up power for the panels. This made the team's job much easier."

Customers selecting pizza at Hand Tossed Pizza Shop see team members working at a refrigerated, five-foot pizza prep line with drop-in pans to assemble pies with dough and sauces that are prepared in the back kitchen. Staff use a deck oven to bake the pies. "Over the course of a couple of weeks, we offer up to 12 varieties of pizzas," says Wood. "It's amazing what we do with pizzas today, featuring everything from the standard pepperoni and sausage to varieties such as Big Mac, taco, and pulled pork and french fries." 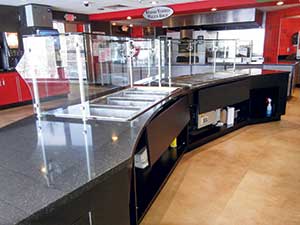 Hot and cold wells hold ingredients in the Coby Tex Mex station where culinary staff prepare made-to-order burritos.One challenge we faced was getting the oven and heavy equipment up to the second floor," Godfrey says. "Because this is an old building, the elevator wasn't big enough to hold the equipment, so our equipment handlers had to walk it up the stairs."

"Sales to campus groups through the catering department also increased as the word was out that the pizza was a great product," Marhaver says.

The culinary team also uses the oven to heat calzones and stromboli, in addition to other traditional pizza shop dishes, which are prepared in the back kitchen.

Coby Tex Mex contains four hot wells and four cold wells that hold ingredients that include everything from proteins and vegetables to peppers and cheese. Customers tell a culinary staff member which ingredients they want in their burritos before the staff member heats them in a steamer sitting in the station. The back kitchen crew prepares the displayed ingredients and brings them forward to a 3-door, 72-inch undercounter refrigerator at the front station as needed.

Burgers & More features burgers, chicken fillets and french fries. Customers place orders that a team member transmits electronically from the POS for the back kitchen crew to prepare. They hand completed orders through a pass-through window to the front team, which presents the food to customers.

Cooking for an Audience 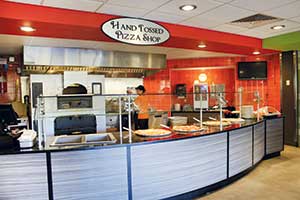 Culinary staff at Hand Tossed Pizza Shop prepare pies that are held on thermal shelves. Team members prepare up to 12 pizza varieties.Perhaps the biggest challenge for the Prentice Café managers was training staff who had been working in the operation for many years behind the scenes to come out front and work at stations while customers watch. "Team members had to learn to be more careful when they cook in front of customers," Marhaver says.

Throughout the design process, sustainability remained an important priority.

The equipment package includes Energy Star–rated equipment, as available. "In addition, a postconsumer and preconsumer waste-sorting system was implemented and has contributed to our saving $4,000 in landfill fees in one semester," Marhaver says.

Using compostable disposables and reusable takeout containers that customers take out and bring back the next day in exchange for clean containers also contribute to green practices. "Working with our agriculture programs, we secured a grant to purchase the reusable take-outs as a test," Marhaver says.

Since opening, the cafe's financials improved significantly. "Staffing was reduced, food costs are down and sales are up," Marhaver says. "Traffic increased by 20 percent compared to the year earlier before the renovation. We went from losing $60,000 a year to being profitable in one semester."