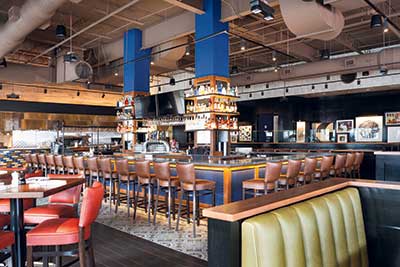 When Massachusetts-based Burtons Grill & Bar opened its first restaurant in 2005, the company targeted the Baby Boom generation. At the time, it made sense for a polished-casual concept like Burtons to pursue these customers. While Baby Boomers remain valued customers, that core group has aged and Burtons now seeks to retain that core customer base and add a new group of customers. "It doesn't make sense to us to keep the brand that's very healthy and viable and not evolve it," says Kevin Harron, Burtons president and CEO.

With that in mind, last year the 12-unit chain rolled out a new prototype in Alexandria, Va., designed to appeal to younger customers while still bringing in their loyal clientele. The new store features local and seasonal offerings; multiple dining areas that offer guests different types of dining experiences; and a fully open kitchen with new equipment to entertain guests and even serve as the focal point for events.

Walking into this new restaurant, customers can choose one of three distinct seating areas, distinguishable by changes in flooring and furnishings.

A traditional dining area includes booths and tables. Sitting to the right and along the operation's back wall, this space appeals to the chain's existing customers, families and others looking for a more traditional dining experience. While it represents a more traditional approach to seating, the space is far from boring. It features a large wire chandelier with a near-industrial appearance, as well as a gallery wall with prints and photographs in different sizes featuring a variety of frame styles.

"You'll see a picture of Diana Ross along with a beautiful photograph of a young girl with a red balloon in front of her head," says Kim Nathanson, senior designer with Niemitz Design Group. "It's very contemporary, but there are enough abstract black-and-white prints that keep it from being too wild."

The island bar and lounge, the second main dining area, tends to appeal to a younger crowd or those looking for a more high-energy experience. 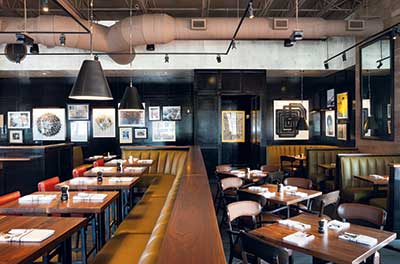 One of the new prototype’s three zones includes standard booth and table seating along with a gallery wall.While the bar at a legacy Burtons restaurant sits along a wall and seats about 15 customers, this new bar seats 32 to 34 patrons. It features four-seat high-tops and a series of two-tops along a long upholstered banquette. The middle of the actual bar includes a pair of structural pillars. Instead of getting in the way of the operation, they serve as bookends to an impressive display of liquor bottles and serving glasses.

The open kitchen and surrounding community tables serve as the third main section of the front of the house. According to Nathanson, the open kitchen brings a different kind of energy to the space by creating a sense of community and focusing on the food, including Burtons' new small-plate and seasonal offerings. "It couldn't be just an open pass-through window, but a full, open display of cooking, a very large oven and great displays of seasonal products," she says. "Certain times of year we'll have bushels of apples or pumpkins, things that are very relevant to what they're cooking, displayed on the line."

To add color to the space, the pony wall in front of the open kitchen is clad in long, narrow tiles of taupe, cream and blue. Next to the open kitchen sit several high-top walnut tables. Among these stands a communal table with seating for ten — a feature the Burtons team hopes will draw younger customers. Above the table, a large dome light with a gold interior and blackened bronze exterior measuring more than five feet in diameter helps define the space.

One of the most eye-catching aspects of the open kitchen is the stone hearth oven, which sits on the end of the production line and almost juts into the dining space. An impressive piece of equipment in its own right, the oven stands out even more thanks to the tile on the wall behind it.

While Burtons initially intended to place counter seating right up against this area, that plan was scuttled when leadership realized the board of health would require some sort of food shield between customers and the kitchen.

Instead, a large table for food presentations now sits in front of the oven. This choice supports the company's long-term plan to offer cooking demonstrations and classes. These could focus on some of the dietary restrictions and choices the chain caters to, such as paleo, vegetarian, and gluten-free, Harron adds.

Back of the House 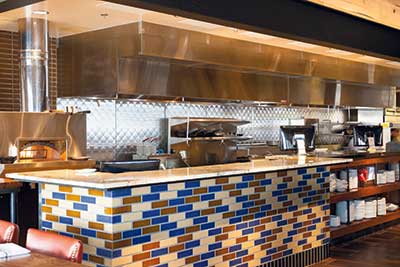 Burtons’ new open kitchen includes a stone hearth oven and a display counter, which the operation plans to use for cooking demonstrations and classes.The stone hearth oven serves as more than a showpiece, however — it represents the most significant change to Burtons new kitchen, both in terms of design and operation.

Paired with a new plancha grill, the equipment forms what Burtons calls the "whim station," as in chef's whim. The chain now encourages its chefs to use this space to experiment and innovate. According to Harron, this station allows for "a lot more innovation at the restaurant level, where individual chefs can create their own items or pull from a pool of recipes and ingredients that allow them to be a lot more local and creative."

Chef's whim items so far have included a swordfish kebab with jasmine rice, herb and pineapple salsa and a sriracha sauce; a pear and blue cheese naan bread with pesto, bacon, pecan and cranberry relish and a balsamic glaze; and a
pumpkin, butterscotch and pecan torte.

The menu, and the station that enables it, have been such big hits that the whim station is going to change soon. Part of the reason is that the oven, with its visible flames, is in Harron's words, "a sexy piece of equipment." He explains, "We have it, so we want to use it." In doing so, the chain has found that some of its core items, such as a buffalo chicken dip and breadcrumb-encrusted fish entrees, turn out better in the oven and have been moved there more-or-less permanently.

The oven's popularity means that the chain has to be careful to limit what items its culinary team cooks there. If too many dishes make the move, the workloads at each station will become unbalanced and, says Harron, "somebody's going down."

Factoring this in, the oven originally specified by the restaurant is smaller than what Burtons actually needs. In future stores, the chain will order a larger unit. What's more, the pantry station, where staff assemble deserts and salads, will merge with the whim station to help balance and control labor loads and costs. Finally, the plancha, which the culinary team uses to sear some proteins and make flatbread dishes, might be eliminated entirely. "I can't tell you we've had nearly as much success with the plancha as the oven. ... We're not totally convinced that's a necessary piece of equipment because it's very expensive. That might go," Harron says.

While the whim and pantry stations will change in future stores, the rest of the kitchen is more-or-less stable. Designed on a straight line, to the right of whim is the saute station. Team members use the 12-burner range to produce dishes such as lobster and shrimp pasta made with tomatoes, snap peas, parmesan, fettuccine and tomato cream sauce, as well as risotto Provençal with artichoke hearts, roasted tomatoes, spinach, basil, feta, olives, lemon butter sauce and pesto. Below the range is an oven for preparing short ribs, crab cakes and other items.

Next to the saute station sits the grill station, which consists of both a flattop and a gas-fired chargrill. The culinary team uses this equipment to make steaks, seafood, chicken dishes and various sandwiches, from classic cheeseburgers to more innovative offerings like the braised short rib grilled cheese with pickled onions, maple sriracha, Vermont cheddar, griddled ciabatta and a red wine jus. Refrigerated drawers below the hot units hold the uncooked proteins.

After the grill comes the fry station. In addition to three to four fryers, this space features a breading station, refrigerated wells for holding sauces, dips and garnishes that accompany fried items, and a work surface — an important but perhaps underappreciated element on cooklines.

"What you have to do is give somebody enough work surface," says Harron. "What you can easily do is give them enough refrigeration and firepower, but you don't have enough space for them to actually set up their plate. It can cause them some real difficulty."

Burtons' pantry station follows the fryers, at least in the existing design. While Burtons may decide to relocate the pantry station in future restaurants, the equipment will likely stay the same: refrigeration and refrigerated tables for desserts, salads and the occasional cold appetizer. While such a station may have different setups, says Harron, "you need counter space, and you need to limit the amount of moves someone makes because a lot of salads and things have multiple ingredients."

While the pantry sits at the end of the production line, the prep area sits next to it, space permitting. If not, it is located along the kitchen's back wall.

As Burtons is a scratch-cooking concept, prep sees a lot of activity. The station typically has three staffers who start work around 8 a.m. Depending on customer traffic, prep could end in the early afternoon or go all the way to closing time.

The prep area contains worktables, sinks, an oven and a range top for making sauces, soups and other items. The exact setup of this hot equipment varies depending on each store's exact menu. "If you have ranges or griddles on top of ovens, convection sometimes is a problem. It doesn't operate as well. If we're going to use a lot of oven prep, we're going to go with a simply stand-alone convection oven," says Harron.

So far, three Burtons restaurants — all new builds — feature this new design. The most recent opening was in Charlotte, N.C. That store, says Harron, is doing "very, very well."

Transitioning to a new layout always comes with unforeseen growing pains. Harron, though, remains content to let the team work though any issues. For example, once the kitchen staff gets used to putting their tongs in a particular spot, they won't waste any more time looking for those tongs.

Burtons plans to open three more locations with this design in 2017. At the same time, the chain plans to remodel its older locations to match the new prototype. This, admits Harron, is a challenge, with recent remodel estimates coming in 70 percent above where the chain started.

Beyond that, Burtons continues to look for partners to open new stores across the U.S., with a particular focus on Florida, North Carolina and the Washington, D.C., area. The company is first looking to form joint ventures but remains open to franchising.

Any partners that do sign with the company will get a restaurant designed with the future in mind. "I clearly see a younger customer base in there," says Harron. "That was a desired result. I expect to see that in our restaurants we open this year. We're reasonably optimistic our changes are working."