Trump presidency promises both for the foodservice industry 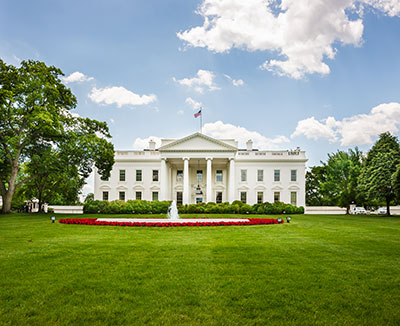 There's a lot that we don't know about how one of the most unpredictable, polarizing and least experienced political candidates in history to win the presidency may ultimately impact the country, let alone the foodservice industry. But there are a few things we do know.

By the time this issue lands on your desk, Donald J. Trump will be the nation's 45th president. Much of the "Washington swamp" will have been drained and refilled and the business of transitioning to a Trump-led U.S. government will be underway. The fact that the Republicans hold a majority in both houses of Congress will, presumably, help smooth the transition and pave the way for swift acceptance of the president's cabinet picks and policy proposals.

We also know that, for the first time in the nation's history, our president has a direct connection to the hospitality industry. The real estate mogul and former TV celebrity owns and/or has a significant stake in skyscrapers, luxury hotels, resorts and golf courses, including Trump-branded restaurants and restaurants developed through licensing agreements with high-profile chefs and operators.

Trump has tapped Andrew Puzder, CEO of CKE Restaurants Inc., to serve as secretary of labor. Originally
scheduled for mid-January, Puzder's confirmation hearing date was pushed back and was expected to be rescheduled in early February.

Widely credited with orchestrating an impressive turnaround at CKE, Puzder has been likened to Trump for his sometimes brash and politically incorrect style as well as for being a shrewd and successful businessman. He would be the first secretary of labor in U.S. history with direct ties to the foodservice industry. CKE Restaurants owns, operates and franchises QSR restaurants under the Hardee's, Carl's Jr., Green Burrito and Red Burrito brands. System-wide, the company has more than 3,300 restaurant locations in 42 states and in 28 countries.

Puzder's approach to fighting for workers appears philosophically at odds with the types of worker-protection reforms and regulations that the Department of Labor (DOL) under the Obama administration fought to implement. Puzder has been a vocal critic of proposals for minimum-wage increases and new rules regarding overtime and work scheduling, asserting that they ultimately hurt the very people they're designed to help by eliminating jobs and hampering business growth.

His nomination was widely hailed as an unconventional and uncommonly pro-business choice. That was good news to many in the foodservice industry, where the costs of complying with new labor-related regulations have put significant pressure on margins.

In fact, changes to how the DOL functions and to the types of regulations likely to be repealed or softened top the list of hot-button issues for many foodservice executives, according to RJ Hottovy, global director of consumer equity research and senior restaurant and retail analyst at Morningstar. Trump's stance is that minimum wage should be decided by each state, not the federal government. As such, it's highly unlikely that any federal mandate would be forthcoming, and existing wage and labor mandates that increase costs and hamper growth may be repealed or clipped back.

"Everyone's very tuned in to see what's going to happen on the labor front, especially with the nomination of Andy Puzder as labor secretary," says Hottovy. "Wage inflation has been a key topic. It's something that the bigger corporations can generally handle, but in the restaurant industry you're dealing with a lot of franchisees and small business owners, many of whom can't handle additional wage increases. It will be very interesting to see what kind of legislation will be put in place. We've seen proposed wage increases and overtime rules as well as joint-employment rulings impacting liability for labor law violations on the part of corporations and franchisees. We don't know yet what will actually happen, but if these types of things do get rolled back or never make it to full legislation, that's potentially a positive for the restaurant industry."

In a statement on the National Restaurant Association website, the organization's president and CEO Dawn Sweeney characterized Puzder's appointment as good for business growth and said his experience in the industry would bring much-needed business savvy to the DOL.

Hottovy adds that conversations with restaurant company executives have revealed cautious optimism about the impact the Trump administration may have on their businesses. And, he notes, the stock market already has responded: "Restaurant stocks are one of the best performing categories since the election, so there's generally a fairly optimistic outlook."

One of Trump's biggest campaign promises was the immediate repeal and replacement of the Obama administration's Affordable Care Act (ACA), which he terms a "catastrophic disaster." While he's dialed back the rhetoric on some issues since winning the election, Trump headed toward Inauguration Day no less adamant about keeping that one.

Calling the ACA one of the "biggest challenges many restaurateurs will ever face," the National Restaurant
Association asserts that the legislation has a particularly profound effect on restaurants since they are labor intensive, have low profits per employee, a large number of part-time employees, and a young and mobile workforce.

Many in the restaurant industry would agree that, at least from a cost-to-comply standpoint, the federally mandated healthcare program has been extremely challenging. Its anticipated repeal dovetails nicely with some of the key wage and labor issues, Hottovy says.

Charlie Souhrada, CFSP, director of member services at the National Association of Food Equipment Manufacturers (NAFEM), believes changes to healthcare legislation could be a boon for the industry. "It impacts manufacturers, who do hire a lot of people, but it has an especially huge impact on the operator community because restaurants are such a massive employer," Souhrada says. "The higher an operator's labor costs are — and the ACA has added significantly to those costs — the tighter their margins are and the less money they have for capital expenditures and new equipment."

Two of the easiest areas in which to predict Trump administration movement are taxes and trade agreements. Trump has remained steadfast in his vows to implement large tax cuts, reduce spending and renegotiate trade deals. He opposes the North American Free Trade Agreement, saying he plans to immediately renegotiate the terms of that agreement or withdraw from it completely.

Trump also vows to withdraw from the Trans-Pacific Partnership (TPP), a global trade agreement between 12 nations that aims to deepen economic ties, slash tariffs and foster trade to boost growth. Signed in February 2016, the pact has yet to be ratified. Trump's disdain for it makes that highly unlikely.

In looking ahead to the potential impact of the Trump administration, Jeff Couch, principal of Preferred Marketing Group in Chatsworth, Calif., and current president of the Manufacturers' Agents Association for the Foodservice Industry (MAFSI), notes, "People will always need to eat, so our industry, compared to some others, will be pretty solid regardless of a presidential election outcome. My main concerns — and optimism — with the incoming administration is the renegotiating of trade agreements. Hopefully it will put more people to work without sacrificing the progress we have made in the global economy. Hopefully any tax reform or small business deregulation will ease the tax burden in the middle economy, allowing for more growth. The real challenge to our side of the industry will come with regulations concerning food imports and farming, as these costs will trickle to our business."

Taxes are another area of concern for the industry. A lower corporate tax rate would free up capital for growth, explains Hottovy. "A lot of the smaller franchisees, in particular, would be impacted so it could be a real positive for the industry. Of all the proposed legislation out there, including immigration reform, which will have a much harder path to becoming reality, tax reform would likely have the easiest path to being passed."

Characterizing the mood of NAFEM's membership as one of "measured curiosity," Souhrada echoes sentiments that the Trump administration presents the potential for reduced regulatory activity in all areas and more "sympathetic ears relative to manufacturing, the needs of small businesses and, perhaps, a reduced emphasis on the Department of Energy and
Environmental Protection Act that we as an association have been following over the past two Obama administrations."

Manufacturers should not expect any sudden policy changes, however. "A lot of these issues will not go away because they're part of a global movement, either toward ozone-related environmental concerns or about energy efficiency," Souhrada says. "That remains true no matter who is in the White House."