Poutine (/pu??ti?n): a Canadian fast-food dish with origins in Quebec consisting of french fries and squeaky cheese curds topped with a light brown gravy. Commonly found in diners and “greasy spoon” joints in Quebec, the cult favorite has become a staple on menus at top chains, including McDonald’s, Wendy’s, Burger King and others in Canada. 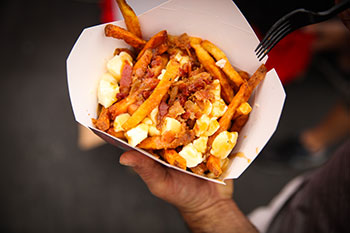 Classic poutine at Smoke’s Poutinerie starts with a base of french fries and cheese curds, topped off with gravy, then loaded with extra toppings, such as bacon. Photography courtey of Smoke’s PoutinerieFounder Ryan Smolkin opened his first Smoke’s Poutinerie in Toronto in 2008 and began a robust franchising program the following year. With more than 100 locations in Canada and 5 in the U.S., Smoke’s Poutinerie continues to expand throughout North America. “Our goal is to open 1,300 locations by 2020, with 95 locations this year alone in both Canada and the U.S.,” says Mark Cunningham, global chief business development officer for the emerging brand.

The chain is currently in the design and build-out stage with a Michigan store that will round out its U.S. portfolio in Ohio, Pennsylvania, New Jersey, Delaware and Maryland. Also under consideration: A move into Chicago and Wisconsin, a stomping ground for cheese curds and thus a natural fit for expansion. Smoke’s Poutinerie has also focused on venturing into non-traditional markets such as college/university campuses, airports, transportation hubs, amusement parks and sports and entertainment arenas, including NHL hockey stadiums in Phoenix and Tampa, Fla., which opened last year.

For the menu, Smoke’s Poutinerie builds on the classic staple of french fries, cheese curds and gravy, adding tasty toppings like chipotle pork, double-smoked bacon, chicken, ranch dressing and even ground beef, pickles and special sauce to create 30 different variations, including vegetarian and gluten-free options and regional specialties like Philly Cheesesteak. Each 1,000- to 1,500-square-foot space (nontraditional spaces span 350- to 500-square-feet) have only about 15 to 20 seats, so the majority of the business actually takes shape as takeout and catering, Cunningham says. 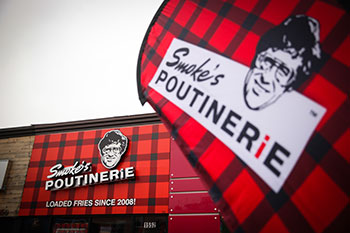 Late-night eaters also flock to Smoke’s, which is why the chain does especially well on college campuses and in heavily urban environments. The funky, playful design — inspired by Smolkin’s love of 1980s glam rock and quirky personality — features signature red- and black-checkered graphics and signage, dark flooring and custom millwork, with an open kitchen area and 50-pound bags of potatoes for decor.

Top Poutine Shops and Trucks in the U.S.

In the U.S., poutine has shown up more on independent restaurant menus, but some food trucks and fast-casual outlets have made it the main star.