The Culinary Institute of America marked its 70th anniversary with a cake made by students and decorated in school colors.

The CIA, then known as the New Haven Restaurant Institute, held its first classes on May 22, 1946, in New Haven, Conn. The college moved to Hyde Park, N.Y., in 1972, and has since grown to include campuses in California, Texas, and Singapore. 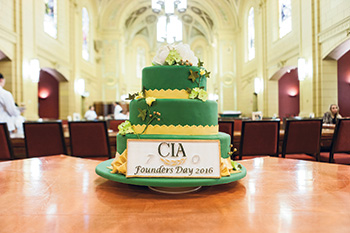