The National Restaurant Association Educational Foundation (NRAEF) honored members of America's armed forces for excellence in foodservice with a series of awards. 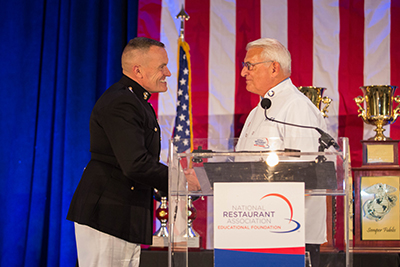 Major General Vincent Coglianese of the U.S. Marine Corps (left) greets Dick Hynes of the ITW Food Equipment Group during the awards ceremonFollowing is an overview of the military foodservice operators receiving awards in 2016:

The Philip A. Connelly awards (Army):