As more people choose plant-based, more wholesome diets, they’re coming back to the Mediterranean way of eating. Consumers of all ages are favoring flavors from Italy, Southern France, and Greece — from Millennials looking for fresher flavors to aging Baby Boomers looking to eat healthier — and restaurants are responding. 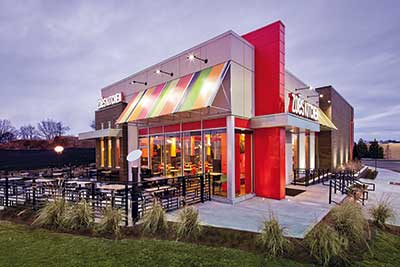 The percent of consumers more likely to live past 70 and have fewer chronic illnesses, physical limitations and mental degenerative problems if they follow a healthy,  Mediterranean-style diet, according to The Annals of Internal Medicine, 2013.

KT: Home cooked, plant-centric meals enjoyed in the company of friends and family are the hallmarks of Mediterranean cuisine. As in most traditional diets, a staple grain anchors the elegant yet unfussy dishes, while a variety of seasonal produce fills out the plate with color and texture. Olive oil is the principal cooking fat, and is also drizzled on fish, salads or antipastos as a finishing oil. Pulses, such as chickpeas or cannellini beans, often round out the main courses, while traditional cheeses, fish, and fresh herbs add flavor, energy, and regional identity. Wine is enjoyed in moderation with meals, and fruit is the everyday dessert. Sweet treats are reserved for special celebrations, rather than daily indulgences.

FE&S: Why do you think Mediterranean-style eating is gaining in popularity?

KT: Consumers are also becoming less responsive to "eat less" messages, and are instead looking for positive models of nutrition behavior. Market research affirms this shift in thinking. According to the 2015 Food and Health Survey from the International Food Information Council, 78 percent of people agree that they would prefer positive messages about what to eat rather than negative messages about what not to eat.

FE&S: What have you seen restaurants/foodservice operators do to incorporate more Mediterranean-inspired foods in their menus?

KT: One of the most popular restaurant concepts right now is the grain bowl, also sometimes called a "globowl," which serves as the perfect vessel for Mediterranean ingredients, such as farro, leafy greens, and other regional specialties. Restaurant operators have also broadened their interpretation of Mediterranean cuisine, outside of Italian spaghetti and Greek salads to incorporate Middle Eastern and North African condiments, spices and flavors. Offering small tapas or mezze plates to share amongst friends is also a Mediterranean food tradition gaining traction.