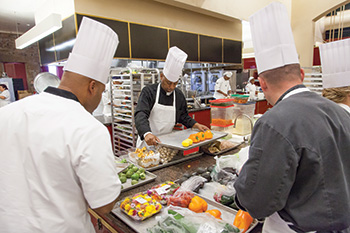 Military servicemen and women work together to prepare ingredientsThirty-six students attended the annual event hosted by the National Restaurant Association Military Foundation at The Culinary Institute of America (CIA) at Greystone, St. Helena, Calif. The program addressed such topics as seasonal cooking, creative utilization of leftovers and knife skills.