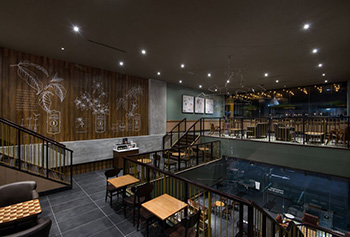 Starbucks stores in Panama are operated through a strategic licensing agreement with El Salvador-based Premium Restaurants of America, which initially teamed up with Starbucks in 2010 for the opening of the company’s first store in San Salvador. Since then PRA has opened 19 Starbucks stores. The design of the 3,304-square-foot space seen above depicts the Starbucks coffee journey across a large hand-painted mural on a locally sourced, wood-clad wall. With a 28-foot-high ceiling, the focal point of the store is a one-of-a-kind, custom-made hanging mobile, designed to represent the Geisha coffee plant, which signifies the birth of the coffee industry in Panama.