The Big Salad’s newest location at the University of Michigan (UM) Hospital Café on the Ann Arbor campus represents the blooming concept’s seventh unit system wide. Working with Aramark International, the hospital’s contract foodservice provider, The Big Salad currently operates a gourmet salad bar where customers can create their own salad. They have plans to open a freestanding counter service location to serve gourmet wraps and salads while also adding a selection of healthy fruit smoothies. 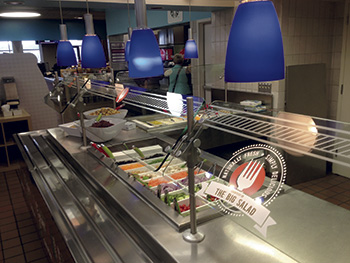 The Big Salad collaborated with Aramark International and UM Health System to offer menu items which meet nutritional guidelines under the MHealthy Dining Program. The program takes into account portion sizes and limits on fat content, sodium and sugars. The MHealthy menu items are reviewed and approved by UM registered dietitians.

“We are focusing on that healthy eater and this is our pure target audience,” said John Bornoty, The Big Salad founder and CEO. “The majority of our volume is done at lunch and most people like to eat healthy at lunch so salads are the perfect choice”

“More and more hospitals are going to go to this food-court style. People don’t want traditional cafeteria-style food,” Bornoty said. “At U of M, for example, they are bringing in Michigan-based concepts. And it’s great for the customer because it gives them more choice. We are not a salad bar. We are more of a fast-casual style restaurant. People come in, tell us what they want and follow their order through all the way to the end.”

At the University of Michigan, the Big Salad’s operation is part of the food court, where it remains open from 11 a.m. to 2 a.m. daily. This location has a staff of three people during the lunch rush, its peak period. In contrast, traditional Big Salad locations will have five to seven staff members to handle the lunch rush. After lunch, staffing drops down to two people and after 5 p.m. there’s typically one person running the operation. 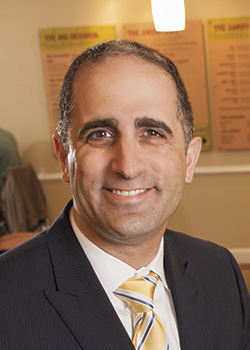 John-Bornotty-Big-Salad“Every deal can be different. It’s what the hospital wants. In our first deal, it’s more of a hybrid. The hospital built out the location but we run it,” Bornoty says. “Most of these in the hospital are part of a cafeteria-style setup while most of our other locations are 1,500 to 2,000 square feet and feature dining rooms.”

Toward the end of the work day, the Big Salad staff uses the on-site kitchen at the University of Michigan to prep fresh ingredients for the next day’s service. This includes on-site preparation of two of the company’s signature salad dressings.

“People think this is such an easy thing, but you learn quickly that running anything with fresh produce can be very difficult,” Bornoty said. “Labor can be high. Food waste can be high. More businesses want to outsource and the first part they want to get rid of is fresh produce-oriented operations. So we would like to take it over because it’s our area of expertise.”

The Big Salad has two other locations in Ann Arbor, and other locations in Michigan including Grosse Pointe Woods, Novi, Royal Oak and Troy, with several others in development. The chain’s goal is to open 100 stores during the next 10 years.