After retiring from a 20-year career in the healthcare industry, including as president of a pharmaceutical distribution operation with over a billion dollars in sales, John Rivers followed his true passions: Texas-style brisket and conscious capitalism. Founder and CEO of the growing 4 Rivers Smokehouse concept, as well as a new concept called The Coop, Rivers turned restaurateur by way of what he calls a “BBQ ministry,” launched in 2004 from his garage. The genesis was a fundraising event he hosted to help support a local family facing mounting cancer-related medical bills.

People loved his beef brisket, which was almost unknown in the Florida market, where pork rules the barbecue roost. More charitable events followed, and a little 1,300-square-foot restaurant with 11 parking spaces came next, in 2009. With no inside seating — just a few picnic tables on a covered back patio — that first 4 Rivers Smokehouse was soon doing between 1,200 and 1,300 tickets a day on weekends and smoking upwards of 15,000 pounds of meat per week. As demand continued to grow, so did the company and its contributions to local schools, churches and charitable organizations. 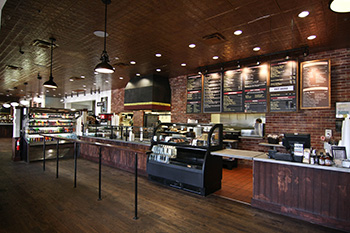 While in line to place their orders, customers can select vintage soft drinks from the refrigerated display case and then are offered samples of 4 Rivers’ signature menu item: brisket.Today, Rivers operates seven fast-casual 4 Rivers Smokehouse locations in Florida and a catering facility that together turn out roughly 2 million pounds of slow-smoked, Texas-style Angus beef brisket every year. He closed his original unit and moved it across the street to a new 7,000-square-foot space. Rivers has written a cookbook, and he bottles and sells 4R’s signature barbecue sauce and a selection of hot sauces, mustard sauces and spice rubs.

For 2015 the company projects sales of $50 million, up from $35 million in 2014. That’s with a model that serves no alcohol and operates six days a week. Rivers expects the Smokehouse concept to continue growing at an average rate of three new company-owned units per year.

While the menu serves up a full range of barbecue specialties, brisket is the concept’s calling card and a competitive differentiator. “The more I can hook guests on brisket and make it my lead item, the more distance I can put between 4 Rivers and all of the other barbecue places here,” Rivers says. “It’s not common in Florida and also not something that you can just decide to add to the menu. You have to know what you’re doing. It took me 18 years to get the recipe just right.”

To help spur brisket sales, the meat is featured at the first of two carving stations that guests encounter at the start of the order line, just after a refrigerated reach-in stocked with old-fashioned craft sodas. Samples of brisket — as with everything down the line — are offered to spur customers to give it a try.

Additional protein choices run the gamut from St. Louis-style pork ribs and beef ribs, to smoked chicken and chicken wings, as well as turkey, sausages, burnt ends, smoked jalapenos, pulled chicken and pork. Menu categories include sandwiches, salads and “classic plates” that come with three sides and a biscuit. A children’s menu and an à la carte menu are offered as well.

To produce the large amount of smoked meats featured and accommodate high volumes, every restaurant has two large smokers. This allows for continuous, 24-hour smoking, 6 days a week, and the flexibility to smoke different items at different temperatures. In most units, the smokers sit outside but are accessible through interior doors in the kitchen. “I don’t want to take up leased space with large pieces of equipment like that, so they’re positioned on the exterior,” Rivers says. “They do have to have their own independent ventilation systems, but it’s all outside.” 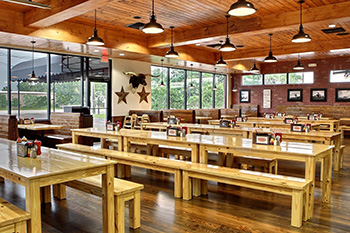 The typical 4 Rivers Smokehouse seats 140 customers.Smoked and barbecued meats may be the stars of the show, but 4 Rivers offers a full slate of house-made sides as well. Smokehouse corn is prepared daily from fresh sweet corn that’s boiled and shucked on site. Southern green beans, slaw, BBQ baked beans, fried pickles and okra, bread pudding, collards, cornbread and sweet potato casserole, among other items, are likewise prepared from scratch daily.

And desserts have a particularly high profile, thanks to the concept’s separately branded on-site bakery operation, called The Sweet Shop. This part of the business turns out creative, oversized cakes, cookies, cupcakes, brownies and bars that are merchandised both on the service line, in glass cases positioned just before the cash registers, and, in some units, in separate bakery display areas. The bakeries service on-site dessert orders but also do a brisk takeout and catering business and have grown to include specialty custom cakes for weddings and other special catering occasions. An average Sweet Shop will sell 200 cupcakes and a couple dozen full-sized cakes every day, Rivers notes.

He adds that that the level of scratch cooking that’s central to the concept’s success demands large kitchens — typically 35 percent to 40 percent of an average 140-seat unit’s total space. Besides the smokers, core equipment pieces in the back of the house include large-volume tilting skillets, separate ovens for kitchens and bakeries, multiple hot-holding boxes, and double-stacked, self-filtering pressure fryers. “We’re pretty heavy from a cost perspective on our equipment package, but we buy the best we can get,” Rivers says. “We do such high volumes that it’s much better for us in the long term to invest in higher quality up-front.”

4 Rivers Smokehouse is a growth concept, but one that Rivers says will expand slowly and deliberately, ensuring that each new restaurant runs smoothly before opening the next location. All units will remain company-owned, and growth is facilitated in part by a strong focus on training and promoting from within.

“When we started this, it was a way for us to give back, and we still view it that way,” Rivers says. “We could franchise and probably grow a lot quicker and make a lot more money, but we’re doing just fine. We don’t even advertise. We take money that would normally be slated for that in the P&L and reinvest it back into the community. It’s the quality of the food that drives our success. We’re not warming stuff up or having a third party make our brisket or ribs. That’s our culture, and while we do intend to keep growing, we will do so without ever compromising the integrity of the brand.”