When Steve Ells and company developed their game-changing Chipotle Mexican Grill concept, they had the benefit of starting with a cuisine already well known and loved by mainstream American consumers. Such was not the case for the three young friends behind Tava Indian Kitchen, the fast-casual brand they launched in the San Francisco Bay area in 2011. But to founders Vijay Brihmadesam, Hasnain Zaidi and Jason Pate, who fled the finance and consulting worlds to launch Tava, that spelled opportunity.

What is now known and loved is the fast-casual restaurant model, which the three felt could be adapted to bring Indian cuisine to the masses in a way that was approachable, contemporary and convenient. They opened their first Tava Indian Kitchen in Santa Clara in 2011 and now have three restaurants operating in the Bay area, including one in a suburban Palo Alto mall food court and one in downtown San Francisco. 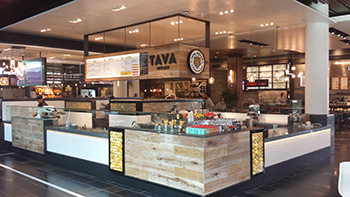 Tava’s team has worked to refine its fast-casual Indian menu and prototype design and is testing urban, suburban and mall locations while gearing up for national expansion.“The concept was founded on a simple idea. The founders thought that the fast-casual model — where you can see all of the food, see how it’s being prepared and pick and choose what you want — would be a great way to introduce more people to Indian food and create an exciting fast-casual restaurant alternative,” says Jeremy Morgan, a former Smashburger exec who signed on with Tava as CEO last July. “A lot of people aren’t really sure what to expect with Indian food or may not be looking for the type of full-service experience offered in traditional Indian restaurants,” Morgan says. “We’re taking the best of what Indian food can be and delivering it in a way that’s on-trend and really exciting for today’s consumers.”

Tava Indian Kitchen’s menu follows a simple, proven menu format: choice of rice bowls, salads or wraps. The wraps, in particular, are signature differentiators. Called “burrotis,” they’re made with fresh, pressed- and cooked-to-order roti, the thin, pliable Indian bread that’s similar to a tortilla but has its own unique texture and flavor profile.

“We start with a ball of fresh roti dough that was made that day in-house,” Morgan says. “It’s pressed and cooked for you right on the line in about 30 seconds before being filled with your choice of fillings.”

Those fillings, while distinctively Indian in preparation and flavor profiles, hit multiple consumer hot buttons. Among the four proteins offered, the meats — tandoori-marinated chicken and seared, grass-fed lamb — are dairy-free, gluten-free, all-natural and halal. Paneer bhurjee, which is crumbled, fresh farmer’s-style cheese simmered with peas, tomatoes, bell peppers and spices, is a vegetarian protein option, while the “Goan garbanzos” option, chickpeas sautéed in coconut milk and spices, is vegan.

From there, guests customize their burrotis (or rice bowls or salads) with add-ons, including rice (white or brown), a variety of fresh chopped vegetables, and two sauces — one, a creamy, tomato-based tikka, and the other a lentil-based daal. Five chutney choices, from cool, refreshing yogurt-based raita to fiery “Tava Lava” provide the finishing touches.

Operations are simple, with the ovens for slow-roasting of proteins, hot-holding and refrigerated serving stations and roti presses being workhorse equipment pieces. None of the equipment is customized at this point, but Morgan says modifications are being made to the all-important roti press. “We started with more of a tortilla press and over time made some adjustments to our approach,” he says. “As we start to scale, we’re looking to customize the roti press more specifically to our needs.”

Those needs include high-volume, fast production of a quality product in a minimal amount of space on the front counter line. As is, the 18-inch cast iron presses turn out hot, fresh roti in 30 seconds, enabling total service times of about 2 minutes, Morgan says. “One issue for us is the presses — they take up a lot of space,” he notes. “The ideal is to have one, but we’ll do two in a unit if we absolutely need them to handle throughput. Finding the space for them is the hard part.”

With three units open and an overwhelmingly positive response from its target food-savvy Millennial demographic, along with a strong sales-to-investment economic model in place, Tava Indian Kitchen is poised for steady expansion. Morgan says the existing units were strategically located in diverse locations — mall, urban and suburban — to enable the team to test and refine its prototype ahead of more aggressive growth. 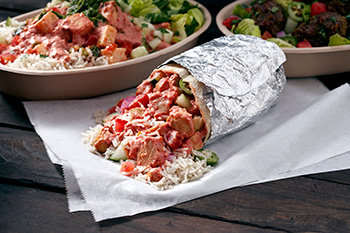 The chain’s signature menu item is the “burroti”, a wrap made from cooked-to-order roti, a traditional Indian flatbread. Meat fillings are all-natural and halal, and vegetarian and vegan filling options are offered for the wraps as well as for salads and rice bowls.“None of the three are replicas of each other,” he notes. “But I think that as we start to fill out the Bay Area, we’ll see a few of the restaurants will begin to have a familiar look and feel to them. We’ll likely do another urban location, similar to our existing downtown San Francisco one, as well as a few more suburban restaurants so we can see what aspects of the concept work in those different types of trade areas. That will give us a great playbook to use as we move forward.”

All of the units, however, will carry the team’s vision of providing authentic yet accessible Indian food in a warm, comfortable atmosphere with contemporary finishes, up-to-date music and fast, friendly service.

“This concept is resonating so well with consumers,” says Morgan. “We know we’re going to be able to grow it significantly. It’s just a matter of executing well and staying focused on the right things. We strongly believe in the fast-casual model and that ethnic foods are only going to get bigger, particularly with Millennial consumers. It’s hard to look into the future and not believe that there won’t be an Indian chain that has developed a national footprint. With Tava, we have the opportunity to be that restaurant concept.”