Foodservice operators from a variety of industry segments turn to central kitchens to achieve standardization, consistency, cost controls and scheduling efficiency. Here we look at how a pair of noncommercial foodservice operators — Corpus Christi Schools and Ohio University — achieve these goals and much more.

Corpus Christi Independent School District (CCISD) is known for running one of the most efficient, financially sound and respected school foodservice programs in the country. The numbers tell a positive story.

Approximately 79 percent of the 38,694 students attending CCISD eat lunches at the district’s 58 schools that serve meals. This participation rate remains consistent with historic levels, despite the implementation of the new regulations put forth as a result of the Healthy, Hunger-Free Kids Act of 2010. 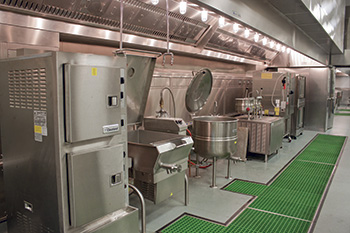 With 67 percent of the district’s students approved for free or reduced meals, the prices remain 30 cents for reduced-meal breakfast (secondary schools) and lunch, and paid meals cost elementary students $1.50, and middle and high school students $1.60. After implementing the Breakfast in the Classroom program in 2009, breakfast participation in 38 elementary schools increased by 30 percent.

A cornerstone facility that supports the program’s success, the Gertrude B. Applebaum Food Service Center was built in 1997 under the direction of Gertrude Applebaum, who was the district’s director for 40 years, assistant superintendent for 7 years, and remains an industry icon. The center replaced a central kitchen with the same concept built in the 1960s. “As I went from school to school, the end product was inconsistent,” Applebaum says. “We needed standardization, consistency and financial savings, and we were able to cut labor and food costs. The philosophy was to build a kitchen with few walls and nearly all mobile equipment to give staff flexibility and ability to move easily in the space and respond to menu trends.”

To the credit of Jody Houston, CCISD’s foodservice director, and her team, Food Services operates in the black, paying all expenses, with a food and labor cost of approximately 40 percent each. CCISD purchases food through the use of a regional cooperative or district bidding. The foodservice team pre-costs menus in the central office before service, and post-costs them in all schools to measure against the department’s goals.

Selected as one of the 30 test sites for USDA’s Nutrient Standard Menu Planning almost 20 years ago, the district continually changes menus and the foods it serves to ensure students get the good nutrition that becomes the link between students’ good health and good learning. Students consume whole grains, low-fat foods, fresh fruits and vegetables, and limited à la carte menu items. In addition, CCISD encourages employees to stay healthy through both a foodservice department-created and district wellness programs.

Houston arrived at the district in 1982 and participated in the design of the center’s central kitchen, built in 1997. In addition to building the central kitchen, the foodservice team also worked with architects and the district’s facilities and operations department to remodel, select and purchase foodservice equipment for all of the 5 regular high schools, 7 middle schools (turning their facilities into food courts), 3 new special campuses, 4 new middle schools and 16 new elementary schools. A new high school and middle school will open in 2015. 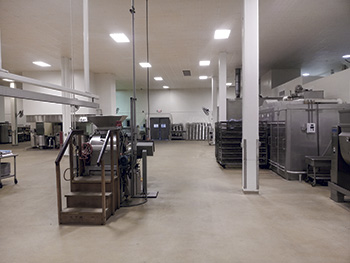 The center replaced an undersized facility that was in need of extensive repairs and evolved from the conversion of an existing food distribution warehouse purchased by the district in 1994. The subsequent conversion strategy relied on upgrading existing building systems and developing an efficient building plan to maximize the center’s goals of efficiency, controlled storage and food preparation/distribution, as well as expanding its role of centralized production. Over the years, Houston has upgraded and maintained equipment, purchased automated packaging equipment and consolidated the bakery and prepackaged operations into one operation.

The central kitchen has no interior walls, which makes production easier. “Flexibility is created by mobile equipment and electrical raceways with only the equipment that needs to be tied down attached to walls and floors,” Houston says. “The whole kitchen can be a staging area.”

The kitchen staff prepares bulk meals for all elementary schools, as well as prepackaged meals for schools without kitchens, and packages fruit and vegetables for the Fresh Fruit and Vegetable Program (administered by USDA and state agencies) along with salads, sandwiches and baked goods for all schools. 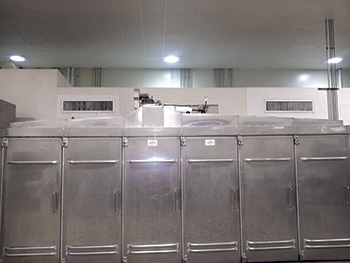 In the 13,000-square-foot kitchen/bakery, the equipment package includes slicers and food processors as well as a vertical cutter/mixer, vegetable dryer and potato peeler. For cooking, staff use a trio of 200-gallon steam kettles, several 60-gallon kettles for special diets, a 3-compartment steamer, and the same ovens that the bakery uses. The kettle pump/fill station was designed especially for this operation so that one employee could operate the fill station (which fills insulated thermoses that are sent to the schools) from above the pit. Lunch menu choices range from breaded chicken sandwiches and tacos to pizza and homemade enchiladas and chili gravy, Spanish rice and pinto beans.

For packaging, the staff use two automatic and one smaller, manual packaging machines. After staff package meals, they place them in transport carts, which are wheeled into trucks and delivered to individual schools.

The center operates two shifts: one during the day for the bakery and prepackaged meals, and one at night for the bulk satellite operations. When the district changed its menus to comply with healthful meal standards and eliminated the preparation of dessert items, Houston consolidated three shifts into two, thereby saving the need for an extra supervisor. In addition, automated packaging machines were purchased to enable a variety of sandwiches, salads and wraps to be prepared and sent to all of the district’s schools. This enables staff to write menus so that all students, even those in satellite schools with limited equipment, can choose between several entrees and side dishes daily.

The Gertrude B. Applebaum Food Service Center is a stellar example of a vision coming to life because its leaders understand efficiency and quality control, as well as systems implementation that incorporates and supports the use of technology. “We also pay constant attention to detail, quality, trends in menus,” Houston says. “In addition, we pay close attention to hiring well and recognize that the personnel all contribute to the success of the operation.”

Financials are strong as well. “Foodservice sales topped $43 million, and food costs are down to $10.8 million, more than $1 million less than a year earlier,” Neumann says. “For FY 15, we are forecasting sales in excess of $45 million.” 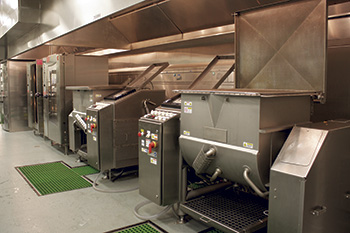 Much of the food cost savings, as well as solid and positive customer satisfaction, are a result of the $10.6 million Central Food Facility, which houses the Culinary Support Kitchen (CSK). Adding the CSK and its distribution/receiving dock grew the size of the Central Food Facility by nearly 10,000 feet to 58,000 square feet. The original 48,800-square-foot Central Food Facility had not had a significant renovation since it was first built in 1972.

“CSK is part of our multiyear capital-planning strategy to elevate the residential dining experience across campus,” Neumann says. “The kitchen is helping to reduce the production footprint, equipment, utilities and resources needed at culinary services locations on campus. These spaces can now be better used for focusing on the student dining experience and developing a concept-driven approach to student dining.”

The project also includes state-of-the-art machinery that allows Ohio University Culinary Services to reduce energy consumption and waste. “All waste from the facility is sent to a composting facility located on the main campus, which is the largest in-vessel composting system at any college or university in the nation,” Neumann says.

Most of the first phase of CSK’s renovation project, completed in November 2011, was the expansion of the building that now houses a full-scale commissary kitchen, a cook-chill system, and an ingredient and meat/poultry prep space that supports a new smoker. Developed in phases over the past three years, the center consists of an ingredients room; meat, fish and poultry prep; a garde manger preparation area; a cook-chill operation, a bakery, and vegetable prep and gluten-free prep areas that were added during this past year. Among the many products produced at CSK are soups, sauces, pasta, sliced deli meats and cheeses, hamburger patties, steaks, chicken, turkey, beef brisket and other proteins, as well as vegetables, prepared salads, pizza dough, sides such as mac and cheese, and baked goods including desserts, pies and cakes.

In addition to extensive walk-in refrigerators, walk-in freezers and dry storage space, the equipment supporting production includes food cutters, food mixers, slicers, 2 combi ovens, a 100-gallon tilting kettle, 50-gallon tilting kettle, conveyor pizza oven, convection oven, charbroiler, fryer and 6-burner range. Cook-chill equipment includes tilting kettles, a tilting skillet/braising pan, a blast chiller, cook tank, vacuum clipper, and a mobile pump/fill station. The cook-chill system also helps Culinary Services strengthen its commitment to supporting the local economy by allowing it to increase its use of local products and ingredients. The system has the potential to allow staff to prepare and freeze products, but production has been so intense that they haven’t been preparing products for more than 30 days into the future.

The most recent renovation phases feature a reworking of the facility’s warehouse and the addition of the gluten-free prep area. 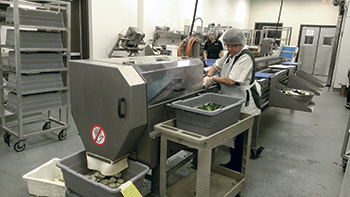 Though extremely pleased with the results of CSK, Neumann knows such production is not possible for every foodservice operation. First, several million dollars must be available for the investment, even if it’s not available all at once (Ohio University phased in the expansion). In addition, the right systems must be in place to manage inventory, production and delivery.

“If you have a cook-chill system, which I recommend, you must reformulate your recipes to work in this system,” Neumann says. “You must develop a HACCP plan, hire a HACCP manager, because the regulations are much stricter for a central kitchen compared to a standard kitchen, and retrain your staff on how to work with a central production kitchen.”

Still, the benefits far outweigh the cons, Neumann says. These include food product consistency; the ability to use more local foods because equipment allows for processing large batches of food at one time; reduced food costs because more items are made from scratch; lower food waste; lower labor costs because a staff member is not needed at each location to make soup, pasta sauces, sandwiches and fruit cups; and greater ease of taking and tracking inventory at each location because fewer ingredients are stored there. Neumann also lists lower equipment costs as a benefit “because we are able to reduce the size of the on-site kitchens and the amount of equipment needed in each kitchen.”

Size of district: 39,694 students at 58 schools, with a new high school and middle school being opened this fall
Size of central kitchen: 81,000 sq. ft., including a 13,000-sq.-ft. kitchen/bakery; 13,000-sq.-ft. dry goods
storage; and 20,200-sq.-ft. refrigerated and freezer storage
Schools served by central kitchen: 58
Meals served (total) per day: 44,500 meals, including 14,000 breakfasts and 30,500 lunches. Nearly 2,000 are served at summer programs, and 26,000 students are approved for free or reduced-price meals.
Meals central kitchen serves per day: The night shift prepares and ships approximately 15,000 meals to elementary students each day. The day shift prepares and ships bakery products and wraps to all 38,694 students.
Staff: 450 total in district; 23 in central kitchen between the day and night shift
Budget: $18.3 million for entire program
Website: www.ccisd.us