With innovative and healthful options, high-end furnishings and a unique bar/restaurant approach, two brothers have turned a low-growth mom-and-pop restaurant into one of Nashville's most popular sports bar chains in just four years. 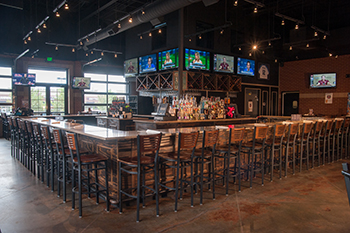 Jonathans Grille BarHere's a quick challenge: Right now, off the top of your head, rattle off the menu at a nearby sports bar. Ready? Go!

And here's what you came up with: cheeseburgers, buffalo wings, pizza, maybe nachos.

The challenge wasn't hard. Sports bars feature pretty standard menus regardless of location. The same can be said for their decor — wooden tables and chairs, jerseys on the walls — as well as their food quality (not bad, but nothing to write home about).

Four years ago, brothers Mason and Curt Revelette saw this uniformity, and in it, the opportunity to turn their family's then 11-year-old restaurant into something special: a combination sports bar/restaurant that serves innovative and high-quality food in a slightly upscale environment that appeals to families and football viewing parties alike.

The brothers seized on that opportunity, turning their lone restaurant, Jonathan's Grille, into one of the most popular emerging chains in the Nashville market. Starting with just one unit in 2010, Jonathan's Grille now operates four locations in the area, with another two under construction and site searches underway for two more — all company owned. This expansion earned Jonathan's a spot on Inc. magazine's 2014 list of the 5,000 fastest-growing privately held businesses in the country.

Curt and Mason's knack for the restaurant business isn't something that was passed down from generation to generation. Despite Jonathan's being family owned, the hospitality industry wasn't a major part of their lives growing up. Their parents, Alan and Candace Revelette, are real estate developers who got into Jonathan's as a long-term investment. Over the years, Alan and Candace became more involved in the restaurant's day-to-day operations, eventually taking it over completely.

During these years Curt and Mason followed their own paths. Curt, now 33, went into the business world and eventually served as CEO of an assisted living company. Mason, 27, began pursuing a career as a college basketball coach. He attended Louisville University, where he worked under Rick Pitino, one of the sport's true giants, and then took a job with the basketball program at Indiana University.

By 2010, though, Alan and Candace decided they no longer wanted the pressure of operating the restaurant day in and day out. Wanting to support their parents and seeing a chance to build something, both Curt and Mason left their jobs to run Jonathan's as partners. Curt, with his business background, handles finance, construction and real estate, while Mason, used to high-pressure situations from coaching, oversees the chain's day-to-day operations. "It's the perfect partnership," says Curt. "We're brothers, and we absolutely trust each other like, I think, no other partners can." 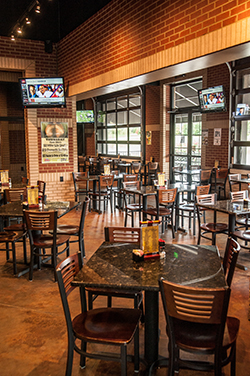 To distinguish itself from other sports bars, Jonathan’s uses granite tables. And instead of cluttered walls, the chain has few decorations and dozens of televisions.One of the first challenges of Curt and Mason's partnership was deciding what direction to take the restaurant in. When they began running Jonathan's, growth was basically flat. So they looked at their own experience as restaurant customers to find their direction.

"We saw that, if we wanted to watch the game, we could go to a national chain, but the food quality and service wasn't up to what we were used to or what we expected to spend our money on," Curt says. "On the flip side, if we wanted the food and service, we were at a restaurant where you had to sit in a bar and everyone was fighting over one television. So we tried to mesh the two worlds to carve out our own niche."

The niche Jonathan's has established for itself starts with the food. Recognizing that people their age — those in the early years of adulthood and starting families — were going to be their target demographic for the next 20 to 30 years, the brothers evolved Jonathan's menu to match their generation's tastes. The chain still offers burgers and wings, but the stars of the menu are high-quality, innovative and sometimes healthful offerings.

For entrées, Jonathan's offers, among other dishes, teriyaki salmon with wild rice; Baja fish tacos; and a prime rib that's slow roasted for nine hours and served with au jus, baked potato and a side salad.

Food is just one half of the Jonathan's equation. Curt and Mason have also drastically redesigned the restaurant's interior as they've expanded.

The most significant move was to split Jonathan's into two distinct parts — the restaurant area and the bar area — which are separated by a full brick wall with two walkways connecting them. Though customers can get to the bar from the restaurant and vice versa, each section has its own entrance as well as its own patio. And no one under 21 years old is allowed in the bar, a decision the pair made after seeing children playing in the bar areas of national chains. "As customers we thought if we're sitting here wanting to enjoy the game and have a drink, we don't want somebody's kid running through," says Curt.

Despite the split, the two sides still feel like part of one establishment, Mason stressed. "Both are vibrant and have a lot of energy. You don't feel like you're stepping into a different place. [The wall] is just to clearly define them." By splitting the two sections, he says, families out for a meal or a group of adult football fans getting a beer "can enjoy what they're there for."

And by splitting the two sections, the brothers have been able to match their customers' revealed preferences during the chain's expansion. While the bar area used to take up about 30 percent of the front of the house, it accounts for approximately 50 percent in the units now under construction.

In keeping with the upscale approach, Curt and Mason have adopted a clean, industrial look for the decor. The interior walls are all brick that match the exterior. Countertops and tabletops are granite, not wood, and the floors are stained concrete. The restaurant offers tables and booths, while the bar area has about 15 cocktail tables and 75 seats at the large, U-shaped bar.

Neither the restaurant nor the bar is "cluttered" with random decorations, says Curt. While there's the occasional beer sign, the walls are instead filled with televisions — 50 to 60 flat-screens in a store measuring roughly 6,800 square feet — practically guaranteeing customers a good view of whatever game they want to see.