To get a taste of the culture and cuisine at Melt Bar and Grilled, consider last month's LTO. Promoted with imagery of a hip-looking polar bear in a black leather "Hell's Penguins" jacket, the Mighty Macaroni Melt featured housemade macaroni and cheese, breaded and fried, and then topped with additional cheese — all melted between slices of toasted fresh-baked bread. 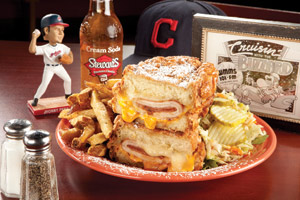 Founded in 2006 by chef-owner Matt Fish, Melt was initially intended to be a bar showcasing craft beers with a small menu of gourmet grilled cheese sandwiches on the side. "I wanted to offer a food experience that was totally different than typical bar food, so I created a fine, eclectic grilled cheese menu," Fish says. "We became wildly popular, and everyone got really excited about the grilled cheese menu. My original concept switched from a bar to a restaurant that also happens to have a really good bar. "

Two expansions later and with wait lists still the norm, Fish opened a second location in 2009. Two more followed, and last November, he opened his fifth unit, in Columbus, Ohio. More will follow as the company finds sites that suit the concept, which Fish describes as eclectic, fun, unpretentious and nostalgic. "Grilled cheese and a beer are universally comforting and accessible," he says. "That's the atmosphere I wanted to create. Whether you're in a suit and tie or jeans and a T-shirt with a Mohawk, the Melt experience gives you great food and a warm fuzzy." 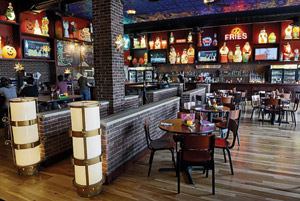 Melt Bar and Grilled started out as a bar showcasing craft beers with a small menu of gourmet grilled cheese. The success of the food menu changed the concept’s approach, but craft beer remains a critical element. The chain now has five units with more planned.The menu changes seasonally, features monthly LTOs and, in Cleveland, weekend specials themed to match classic cult movies showing locally. The idea, says Fish, is to use grilled cheese as a base for just about any combination of ingredients: "We take entrée components and present them in a grilled cheese sandwich format that you won't find anyplace else." Examples include Dad's Meatloaf Dinner with homemade meatloaf, hickory bacon, chipotle ketchup glaze, potato-onion croquette cakes, lettuce, tomato and muenster; Parmageddon with potato-onion pierogi, Napa vodka kraut, sautéed onions and cheddar; and Fish & Puppies with crispy, battered jumbo haddock plus cornbread hushpuppies, sweet slaw, jalapeno tartar spread and American cheese — all piled on Melt's fresh-baked bread, toasted and served with hand-cut fries and a pickle. The menu includes 20 grilled cheese sandwiches, plus burgers, appetizers, soups, salads and desserts.

As the company grows, Fish says it will stay sharply focused on its goal of being not just a restaurant, but an experience that "adds some coolness to your day, to the neighborhood and to the city at large."