Scott Slater, founder and owner of Slater's 50/50, follows a "go big or go home" philosophy — at least when it comes to the casual-dining chain of burger- and beer-centric restaurants he founded slightly more than four years ago. 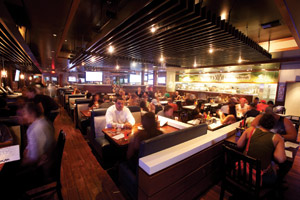 Each Slater’s 50/50 location features lots of televisions,100 beers on tap and a family-friendly atomosphere.It all started with the notorious 50/50 Burger, created by Slater and executive chef Brad Lyons. Made with 50 percent ground bacon and 50 percent ground beef, topped with a sunny-side-up egg, avocado, pepper jack cheese and chipotle adobo mayo, the restaurant's namesake was spotlighted in 2010 on the Travel Channel's Bacon Paradise show. The national exposure poured fuel on an already hot fire, and Slater has since expanded to six units in Southern California, with a seventh opening next month.

Other burgers on the menu are no less flamboyant: There's the Peanut Butter & Jellousy, with bacon, peanut butter and strawberry jelly; the Fritos Crunch Burger, with cheddar, chili, Fritos and Thousand Island dressing; and the Hawaiian Burger, the 50/50 patty with grilled pineapple, Spam, a sunny-side-up egg, American cheese, baconnaise and teriyaki glaze. Customers can also design their own burgers, and the menu includes finger foods, salads, variations on macaroni and cheese and signature dishes. Twists on classic comfort foods include fried chicken and pancakes, the Irish Quesadilla (stuffed with mashed potatoes, pepper jack and bacon), and the Twice Grilled Cheese Sandwich, stuffed with two kinds of melted cheddar cheese and encrusted with more cheddar cheese.

"A lot of the items on our menu are over-the-top, but they have to work from a flavor and quality standpoint and not just be attention grabbing," Slater says. "That's a line that we're constantly straddling." 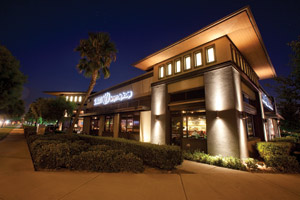 With six units open in Southern California, the company is expanding into Northern California and likely beyond.At the bar, Slater's offers plenty of TV screens for game watching and a selection of 100 craft beers on tap, all of which rotate. The company has a corporate beer monger to manage the program, and all servers and bartenders are Cicerone Certified.

Units average 225 to 300 seats, and most are conversions in B and C locations. "We joke that we could throw one of these out in the ocean and people would swim to get here," Slater says. No off-shore units are planned, but the company heads next to Northern California, and it is exploring opportunities in Denver and Texas as well. Says Slater, "If we can win it with this concept here in health-conscious California, we can take it pretty much anywhere."