College students often crave foods from home, but they don't often create their own restaurant chains to satisfy those cravings. That, however, is just what native Berliners Michael Heynes and Dominik Stein did when they discovered that none of the dining options near campus included their favorite Berlin street food, the döner kebap. 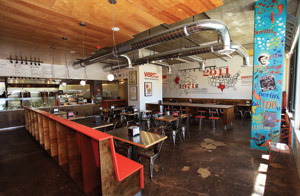 VERTS Kebap units measure 1,700 to 2,400 square feet with seating for 60 to 70 and open sightlines to the vertical grills and griddles.The idea sparked in 2008, after the duo landed in Texas on a business school exchange program. In August of 2011, they opened two VERTS Kebap units on the University of Texas at Austin campus and converted three Smart cars into "the world's smallest food trucks" to test the market off-campus. By the end of 2013 they'd grown to 5 units in Austin, and this year plans are firm for 13 more units, taking VERTS into Dallas and Houston, as well.

"About 50 percent of the fast-food restaurants in Germany sell döner kebap, but there are no branded chains," Heynes says. "It's all small independents. Döner is very popular throughout Europe, but in the U.S. it's almost nonexistent. What is here is typically a gyro, but that's different from authentic kebap."

The chain's marquee product is a sandwich made from high-quality, thinly sliced lean meat, 5 percent lamb and 95 percent brisket. It's tightly layered in 55-pound cones, flash frozen and cooked on vertical gas-fired rotisserie grills (hence, the name VERTS, which also refers to how the sandwich is held). As the meat cooks, staff slice off only the top layer.

VERTS follows a "start, fill, finish" fast-casual model. Customers first choose between traditional döner kebap bread, a tortilla wrap or salad format. They then select a filling: beef/lamb blend, marinated chicken or house-made veggie patty. Finally, they customize their meal from a selection of fresh and grilled vegetables and sauces. A display case offers beverages and desserts, and each unit offers three local beers on tap. 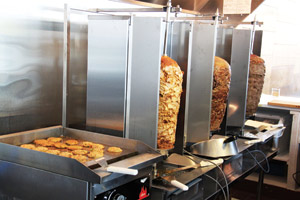 The concept’s marquee product is made with thinly sliced lean meat that has been tightly layered in 55-pound cones, flash frozen and cooked on vertical gas-fired rotisserie grills, hence, the name VERTS.All entrées are priced at $6.95 and have less than 550 calories, making VERTS Kebap appealing for its nutritional profile as well as its unique flavors and low price point, Heynes says.

Typical units measure 1,700 to 2,400 square feet with seating for 60 to 70 and open sightlines to the vertical grills and griddles. While the company has aggressive growth plans, there are no plans to franchise. Says Heynes, "Our concept is so new, and we're still educating people. We don't want to lose the direct
connection to the customer."