FE&S presents its Lifetime Achievement Award to a foodservice professional whose decades-long career
merits recognition for service and commitment to the industry. Ollie Wilkes is the inaugural recipient of this award. 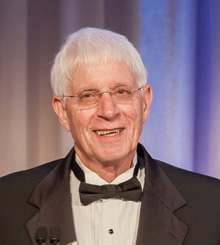 Ollie WilkesDuring the course of a foodservice career that's fast approaching its 50th anniversary, Hotel & Restaurant Supply's Ollie Wilkes has seen and done a lot. He broke into the foodservice industry working as a soda jerk in high school but Wilkes began his working life in the editorial department for his town's newspaper. When management at the newspaper felt Wilkes was better suited for sales he was not so sure and opted to join the Coast Guard instead.

With his tour of duty in the Coast Guard complete, Wilkes set out to find a new job and landed as a DSR with Hotel & Restaurant Supply. With the exception of a brief stint serving as a manufacturer's rep, Wilkes has been with the Meridian, Miss.-based foodservice equipment and supplies dealer ever since. It seems that the newspaper folks were correct after all: a career in sales suits Wilkes well.

Given his long and distinguished track record, other people with accomplishments similar to Wilkes might be content to rest on their laurels, but not him. Wilkes remains very hands on with his customers, working with a team of six people. And he remains rightfully proud of the fact that during his tenure in foodservice equipment and supplies sales, Wilkes and Hotel & Restaurant Supply have yet to miss a store opening deadline for one of their operator customers.

That's probably due to the fact that Wilkes operates with the needs and desires of his customers first. As a result, suppliers never doubt that he will do right by his customers. This approach resonates with his customers, many of whom have named Wilkes and Hotel & Restaurant Supply their vendor of the year on countless occasions.

Spend a few minutes with Wilkes and it quickly becomes clear he enjoys his work. Wilkes has an undeniable sense of pride about the company and the people he does business with. And Wilkes is known for being equally loyal to customers and suppliers.

Having accrued such an expansive industry-related knowledge base, Wilkes readily shares his experiences to help bring other foodservice professionals up to speed on a business he loves so much.

We sat down with Wilkes and asked him to reflect on the foodservice industry, his career and more.

FE&S: Unless you grow up with family in the business, working for a foodservice equipment and supplies dealership is not on everyone's radar. How did you first connect with Hotel & Restaurant Supply?

OW: I did interview with some other people but this business fascinated me. I knew it from my soda jerk days. And this business is funny because if it gets in your blood it stays there.

FE&S: What was the company like when you first joined H&R?

OW: When I joined H&R in 1964, I was the seventh person on the staff. And back in the 1960s there were times when I was the only salesperson H&R had. P.B. Greene was running the company then and some of the things I learned from him I have used forever. I learned how to make cold calls and to stop at construction sites to see what they were building. That's what we did back then. We sold. Back then, the most challenging items to sell were stainless steel sinks instead of galvanized sinks. Metal, galvanized garbage cans were the norm and we tried to switch customers to the plastic ones that are so common today.

FE&S: People reading this might not realize that P.B. Greene was the father of Jerry Greene, H&R's current president. What else did you learn from P.B.?

OW: P.B. Greene taught me that as a salesman in the restaurant business you always want to enter through the kitchen because there is always more to sell there than anywhere else on the property. He taught me to be nice to everyone in that kitchen because they are your future customers. I can't tell you how many restaurants I have put in from contacts I made in the kitchen. Jerry came in to the business in 1966 and he started up our first real contract department. And from then on is when H&R started to take off.

OW: In the 1970s I was a factory rep. I was glad I did that because it gave me a perspective of what was out there. I had the privilege to call on some of the legends in the dealer community, including John Hunsicker, Hank Somersell, Neil Lavender, the Westbrook family, P.B. Greene, Arthur Rhulman and many more that I can't even recall. They all had their peculiarities and expected certain things from you. They were tough. The business was more regional then and they were the powerful dealers at that time. Everybody knew everybody was out there. Every dealer had the same reps calling on them. So if you could call on them and hold your own you would do fine. Back then they were the powerful dealers in this area.

FE&S: What did you learn as a rep that helped shape your career moving forward?

OW: If I had to pinpoint one thing it was loyalty. I have dealt with some of my customers for 50 years. And customers are much more loyal than manufacturers and that's why I came back. And P.B. Greene wanted me back. Every time I called on him he asked me when I was coming back. Making that change gave me a different perspective on what you can expect from your manufacturers and what your customers can expect from you.

FE&S: What's the biggest change you have seen in the industry during your career?

OW: The biggest change is the percentage of people who eat out in restaurants compared to at home. In the 1960s, 85 percent were cooking at home but during that time restaurants started to take off. Today, about 50 percent of all meals are made outside of the home.

FE&S: Any other changes stand out?

OW: The business changed from being a regional business to a national one. You had to go call on customers one week and visit them the next week to deliver what you sold them. Now it's no longer regional. And thanks to technology you can now service customers anywhere.

OW: There is no question about that. It makes you stay on your toes.

FE&S: What's the secret to your longevity?

OW: Earning loyalty. When I came back to H&R in the 1980s, I listened to the customers I had developed. I tried to understand their problems and make it easier for them to run their businesses. My job is to give them the best buy for their buck and give them what they need. Today, someone will call and ask to buy a charbroiler. But you need to ask what they are using it for because it determines what type of product they need. When you do that, then they see you know what you are talking about.

FE&S: When something does not go as planned, how do you respond?

OW: I will tell a restaurateur that if you can walk away from any new opening it was a good one. I've had the wrong truck sent seven or eight states away. If it can happen it is going to happen. So you learn from your mistakes and make sure not to make them twice. Our customers are trying to make a living, too, so we always tried to be fair. You are not burdening them. You respond by doing whatever it takes. If they did not get their forks and have a party coming up, you get in the truck and drive them there.

FE&S: If I were planning to open a restaurant, what advice would you give me?

OW: I have had people call me and say they wanted to open a restaurant. They tell me that "every Friday and Saturday night I have people come to my house and I cook for them." They tell me they love it. But I tell them it is a tough business that takes lots of hard work. There is no question about it. This is certainly not an eight-to-five job. It's tough. On Friday when everyone wants to take off and head to a restaurant to have a good time, that restaurateur's work week is just starting.

FE&S: Many companies will say their businesses grow along with their customers, but in your case, that's spot on, isn't it? You really have grown with your customers.

OW: The chain business I have comes from customers who started out with one restaurant and grew from there. And we did what we needed to help them get open. The net result is I've helped them open countless restaurants over the years. I have been really fortunate in meeting great people. I tell everyone now that most of my friends are my customers.

FE&S: Your son Tony now works for Hotel & Restaurant Supply. Did you recruit him?

OW: Not really. Jerry probably had more to do with that than I did. When you get your family involved in your business it can be touchy. I am happy to see him here, though.

FE&S: What keeps you coming back?

OW: Working for the Greenes. They are one of the few families I have ever worked for. It's hard to describe the relationship I have had with them over the years. I have had other opportunities but I doubt they would have been as much fun as this. I learned a long time ago that it is more fun on this side of the bar.

FE&S: When looking back at your career, what makes you most proud?

OW: I guess it's just solving customer's problems and making their lives easier. In doing that you sell merchandise.

FE&S: You have gone from being the dealer's lone salesperson to having a team of people working with you. Can you tell me a little about your team?

OW: Each one handles their own specific chains. There's a lot of phone calls and other work that goes into helping these customers. And we have a tremendous amount of support from our warehouse crew and installation crew. It's not me. It's us. The team includes Angela Barksdale, Allan (Earl) Dear, Tracy Cooksey, Johnny Hodgins, Mindy Manues and Tony Wilkes. I've always tried to say we instead of I. It's a team effort. Very few things are handled individually today.

FE&S: Over the years, what's the most important lesson you have learned?

OW: Most important lesson: Always be fair. That sums it up. It makes life simple. And include honesty in being fair. Don't mislead people. If you tell them you are going to do something, then do it.