Wingstop Takes Off: An In-Depth Profile on the Fast-Casual Concept

The fast-casual wing concept's sharp focus helps it rise above a growing flock of competitors. 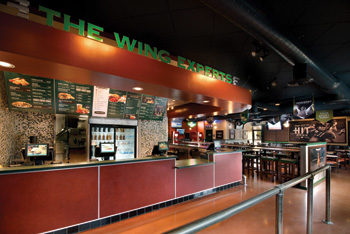 The average Wingstop location measures between 1,500 and 2,200 square feetThe restaurant industry has no shortage of concepts that serve chicken wings. According to research firm Technomic's 2012 category study on wings, more than one-third of the Top 500 chains now offer wings, and that's a number that continues to grow.

That's no secret to the folks at Richardson, Texas-based Wingstop, one of the top players in the wing-centric chain restaurant segment. Founded 20 years ago as a small, storefront, dinner-only concept, today Wingstop is part of Atlanta-based Roark Capital Group's portfolio of fast-growing power brands. Fast growing, in Wingstop's case, to the tune of 75 new units this year, which is a company record. This month, Wingstop is set to open its 600th unit and remains on track to hit its target of 1,000 stores by 2017.

But it's not just unit numbers that are up. The chain boasts 10 consecutive years of same-store sales growth — even during 2008 and 2009 when the most that many companies could hope for was survival, much less growth. Wingstop expects this year's average unit volumes to hit $970,000, up from $902,000 last year. To put its growth curve in perspective, just 10 years ago Wingstop had 88 units, each raking in slightly less than $400,000 in sales.

Dave Vernon, Wingstop's chief development officer, attributes the chain's success to the combination of the concept's simplicity, its real estate model and the low cost of operating — in addition to the quality of its products.

"When the original concept started, a typical store was 1,100 to 1,200 square feet. There wasn't much room for seating, and it was primarily takeout. For the most part, that's still true today. Our store size has grown somewhat — now the average is closer to between 1,500 and 2,200 square feet — but our sales mix is heavily weighted toward takeout, at about 70 percent, and our concept is very simple in terms of menu," Vernon says. "We concentrate on what makes us unique and good — distinctive flavors of wings, sauced and tossed to order." 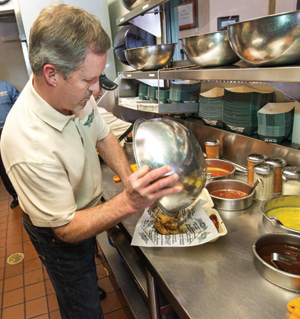 Wingstop cooks and sauces its chicken wings to order. The chain's custom stainless steel sauce tables feature individual labled inserts plus shelves above for the bowls that staff use to toss the wings to orderOver the years, Wingstop's original bare-bones menu of wings, fries and beverages has expanded only slightly. Thus far, the chain sees no need to diversify into other menu categories, staying sharply focused on its core product. Permanent menu additions to date have focused primarily on adding boneless wings and tenders.

Today, boneless menu items make up about a third of sales, according to Vernon. "It is a growing part of our business, which is good because, depending on wing prices throughout the year, you can hedge your bets," he says. "Right now, boneless is less expensive than bone-in, so we're seeing a lot of chains running boneless promotions." Boneless product sales tend to be stronger in new Wingstop markets than in existing, core markets where customer loyalty was established before boneless items were added to the mix, Vernon adds.

A couple of years ago, coinciding with a stronger push on lunch business, which the chain introduced in 2003, Wingstop also added the Glider sandwich to the menu. It's a boneless chicken filet that can be tossed in any of Wingstop's sauces, served on a fresh-baked bun and offered solo or in combo meals. While the sandwich is a welcome addition and helps to counter the veto vote by those who might not want to tackle an order of wings at lunch, it hasn't clipped wing sales, Vernon says.

Side options, such as seasoned fries that staff hand-cut fresh in the stores daily, round out the menu. They're available with the chain's signature fry seasoning or with a choice of lemon pepper or Cajun seasoning. Other sides include baked beans, coleslaw, veggie sticks, cheese fries and fresh-baked yeast rolls, which the chain sells individually as well as by the half-dozen and dozen. Customers can also choose from among four à la carte dips or sauces to enjoy with their wings and/or fries: buttermilk ranch, blue cheese, honey mustard and hot aged cheddar cheese sauce.

While beer is available and might seem a perfect complement to an order of hot and spicy wings, especially in a concept that operates daily until midnight, it's not much of a factor in the sales mix — less than 2 percent, says Vernon. "That's probably because so much of our business is takeout," he explains. "We're not like a Buffalo Wild Wings, which is more of a sports bar that serves wings. We just focus on wings."

That singular focus enables Wingstop to keep its operations simple, making it easy for new franchisees to get up and running quickly. Each store typically requires a total of 12 full- and part-time employees, helping keep labor costs low.

Kitchen space averages 600 square feet, with key stations including a 5-bay fryer, french fry cutting station and a saucing table. The only other significant pieces of equipment in the back of the house are the hoods, a walk-in cooler and a walk-in freezer.

"The only things that come in frozen are the boneless products," Vernon says. "Everything else is fresh. We hand cut our fries every day so we have a station for that, and then we blanch and hold them in the walk-in cooler until we need them for service. It's simple. We have basically about a $100,000 total equipment package, and everything except the sauce table is off the shelf. That's great for franchising and also for international expansion because we don't have to source out-of-the-box materials and equipment that are difficult to find in other countries."

The customized stainless steel sauce tables feature individual labeled inserts for each of Wingstop's sauces, plus shelves above for the bowls that staff use to toss the wings to order, as well as packaging materials the employees need to access quickly.

Although it features a limited menu and a design that promotes speed and efficiency, Wingstop lands squarely in the fast-casual — rather than quick-service — segment. That's because the culinary staff will not cook any wings until a customer places an order. And each order requires a 14-minute cook time. Customers can pick up orders they have called in ahead or placed online, or they can order on-site from the cashier behind the counter and dine in or take their orders to go. Just as in other fast-casual concepts, dine-in customers place their orders, move on to the beverage station to get their drinks and then find seats. In some locations, runners bring customers'
orders out to their tables, but in most, a staff member calls them to the counter when their order is ready.

Those 14-minute cook times also dictate that drive-through isn't a part of the company's business model. Some stores do, however, have pick-up windows that work well for servicing call-ahead and online-order customers.

Vernon acknowledges that, as the company has grown, it has trended toward slightly larger, wider, more inviting stores that cater more than in the past to guests who choose to dine in. While a typical store might have seating for 30, newer, larger stores might offer seating for 70 or 80.

"We're trying to better serve our customer base," Vernon says of the move to larger, more comfortable stores. That base includes a heavy concentration of Hispanic consumers, younger consumers, African American and Asian consumers. "Depending on where we build, we may go with larger stores because people in those communities may tend to eat together in larger family groups. So as we evolve, we're building bigger, wider, brighter stores."

While the store sizes may experience moderate growth, Wingstop remains focused on locating mostly in urban strip center locations. "When we start in a market, we typically go into urban areas first, blue-collar and middle-income neighborhoods, in particular, where there is a more diverse customer base," Vernon says. "Once our base is established, we move out to the suburbs from there."

Because of the types of sites it looks for — strip centers in nonaffluent urban areas — Wingstop generally enjoys lower rents than many of its competitors, which improves the concept's attractiveness to franchisees. "Our rents in these centers as a percent of sales are very low," says Vernon. "If you look at our average unit volumes and sales per square foot we're probably one of the highest, outside of maybe Starbucks, in the industry. It keeps our investment low and even if the cost of food fluctuates, which it certainly does in the chicken business, we can run with low labor and low rent." 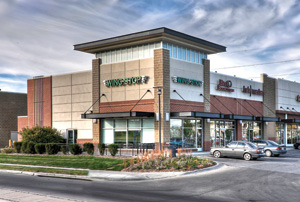 Because Wingstop targets strip centers in nonaffluent urban areas, the chain generally enjoys lower rents than many of its competitors, which can be an appealing factor to prospective franchisees.The move to larger spaces and more dine-in business, while not yet impacting its core real estate strategy, does have the Wingstop team focusing harder on its prototype design. So, too, does the increasingly pressing need for chains of a certain age to keep their brands fresh and remain relevant. The current look, which features a décor built around a nostalgic 1940s aviation theme, has "been around a while," according to Vernon.

"We're dabbling with some other looks, and we're looking at bringing in some designers to work with our marketing team and develop an updated theme that may resonate more with younger customers," he says. "We don't want it to look too slick. For example, in the U.S. when you go to a barbecue place you don't want it to be too high tech. We also don't want it to be too chain-like, but we do want to think about our image a bit more."

In international markets, which are a big growth target, Wingstop has already gone to a more upscale, full-service prototype the company is testing here in the U.S. as well. Called Wingstop Sports, it features stores with a footprint closer to 3,600 square feet that have a sports rather than an aviation theme, as well as full bars, full table service and a broader menu that includes appetizers.

Domestically, the first of those prototypes opened in January in Las Vegas. The jury is still out on whether more will be developed, Vernon says. "We like it, but it's a different model, a different operation system," he notes.

Still another iteration that Wingstop is working on is its first nontraditional unit, set to open within the Dallas/Fort Worth International Airport in mid-2014. Not only will that unit require some design modifications to fit a significantly smaller footprint than its regular stores, it will also require operational modifications to facilitate speedier service. "In an airport setting we can't have people wait 14 minutes for their order, so we're looking at some different equipment that will enable us to cook and hold and get the product out to customers much quicker," Vernon says.

Overall, he adds, while the chain's international growth plans are aggressive and exciting, it is primarily domestic growth that's expected to help Wingstop hit its 1,000-store target within the next four years. "We've got a tremendous amount of room to grow right here," he notes, "and we've got a tremendous amount of momentum. We're having a great year so far — up 10.3 percent at the end of the second quarter — and football season's just getting underway."