Long before smoothies became ubiquitous, Smoothie King was hard at work helping create the category. Celebrating its 40th anniversary this year, the company bills itself as the inventor of these fruity, blended concoctions and has built its franchise on a brand strategy that focuses on health and nutrition as much as on flavor, fun and convenience. 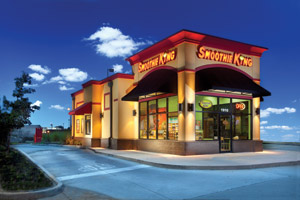 Smoothi KingThat's a blend of attributes that its new owner Wan Kim, global CEO of Smoothie King, feels strongly positions the chain for significant growth even in this increasingly crowded and competitive market niche. Kim is a master franchisee who built a 130-store presence for the brand in his native South Korea before purchasing the New Orleans-based company last July under the corporate name SK USA Inc.
Having secured $58 million in capital from institutional investors Standard Charter Private Equity and National Pension Fund, he's got both the passion and the financial muscle to reenergize Smoothie King and take it into aggressive growth mode.

With slightly more than 600 locations, the company's primary footprint extends from Texas to Florida to the Carolinas, leaving plenty of room for U.S. expansion. Global growth well beyond Kim's established South Korean base includes such target markets as Southeast Asia, China and the Pacific Rim. In fact, Kim's mission is to add 1,000 new locations during the next 5 years; 40 new franchises and 30 corporate locations are slated to open this year.

O'Keefe, who joined the company in January, says the goal is for 20 percent of all units to be company owned. "We only had one unit in the New Orleans area where we conducted new franchisee training," he says. "When Wan acquired the company, he was also a domestic franchisee with six units in South Florida, so by definition those became company stores. But our goal this year is to put 30 new company stores in our domestic portfolio; and as we grow, our optimal ratio is 80 percent franchised to 20 percent corporate."

One of the new corporate store division's goals, O'Keefe adds, is to take advantage of more strategic real estate opportunities. Another is to broaden the range of R&D and testing. Currently, only about 12 percent of total sales come from non-smoothie items. In Korea, however, Kim staved off potentially negative effects of seasonality with a small line of complimentary food items, such as salads and wraps, in addition to hot coffee and tea. "It's very effective there, and that's something that we'll test as we build more corporate stores," O'Keefe says. "We'll be able to test food items that would have the same positive impact in the U.S. as we're seeing outside the U.S."

In addition to a sharper focus on corporate store development, Smoothie King continues to look for many more franchisees — and new types of franchisees. Historically opportunistic in terms of its franchise development efforts, the team is working to put in place a more strategic approach. "We currently have more single-unit operators than multiunit," O'Keefe says. "One of my goals is to reverse that. I want to find more investors who can take on the commitment to do five- or six-store deals. We're going to aggressively look for that. We're also looking hard at our existing franchisees and seeing where we can grow."

"We're starting to attract experienced operators to our system," notes Richard Leveille, executive vice president of franchise development and real estate, in a company statement on its new franchise sales strategy. Such operators, he adds, want to control entire markets that they can run more efficiently, without interference from other operators who may not run their restaurants as well. They can also control marketing and other issues. "They want territory protection," Leveille says. "So we're going to introduce that."

To kick off its new growth drive and celebrate its 40th anniversary, Smoothie King earlier in the year announced a franchise incentive program. For the first 40 agreements signed in 2013, franchisees receive 40 percent off the franchise fee, a savings of $10,000.

Billing itself as the "premier smoothie bar and nutritional lifestyle center," Smoothie King touts authenticity and maintains the sharp focus on the product its founder invented four decades ago. While O'Keefe hints that some menu diversification could be in the cards down the road, smoothies remain the unequivocal focal point and continue to represent 90 percent of the chain's product mix.

"We've positioned ourselves from a credibility standpoint," O'Keefe says. "We are the inventors of the product, we have the best product, and while others may offer it, they don't offer it in the same quality that we do."

Specifically, O'Keefe says, Smoothie King's fruit-based smoothies consist of the freshest fruits and all-natural juices and include no yogurt or ice cream. Customers can choose from among a set menu of nearly 20 variations on the "Refreshing Fruit Smoothie" theme or opt for more functional "Nutritious Smoothie Meals." The latter category, which features names such as the Activator, the Shredder and the Hulk, contain from 7 to 45 grams of protein and act as nutritious meal replacements with extra benefits.

For example, the chain describes the Shredder as a "powerful formula of our Gladiator protein, L-Caritine, Citrimax and Chromium that helps get your metabolism ripping through unwanted pounds." The Hulk, targeting those customers looking to gain weight instead of lose it, features "all-natural ice cream and our special weight gain powder." High in protein and calories (804 with 90 grams of sugar for a 20-ounce serving of the Hulk Chocolate), the Hulk comes in chocolate, vanilla and strawberry flavors.

So, while many operations now include smoothies on the menu as snacks, treats and desserts, Smoothie King is really out to dominate the quick, healthy meal-replacement market. "It's the nutritional aspect that we play to," O'Keefe explains. "There's a lot of awareness now on the part of consumers in terms of healthier, active lifestyles and seeking alternatives to unhealthy fast food. We think that our products meet that need, and we also think that in our segment we make the case that it's a meal replacement. That's a big point of distinction, and it separates us from the pack. We can position our product as a healthy snack, but we're trying to differentiate it from something that's more indulgent to something that's more nutritious."

O'Keefe points out that in addition to its set menu items, customers can customize smoothies to their liking, building their own selection based on flavor, function and specific dietary choices. They can also add enhancers such as protein or multivitamin powder to any smoothie on the regular menu.

Smoothie King's newest offering, rolled out in early July, is the Pure Recharge Smoothie, formulated with whole coffee berry, green coffee bean, Vitamin B12 and gingko biloba. The chain markets it as a "naturally caffeinated, crash-free boost" and an alternative to the artificial ingredients found in most energy products. Weighing in at less than 260 calories for a 20-ounce portion, it comes in strawberry and mango strawberry flavors and is also available as a dietary supplement in shot format.

The chain's focus on nutrition is in line with what its founder, Steve Kuhnau, had in mind from the beginning. Kuhnau suffered from allergies and low blood sugar and, in search of a remedy, began experimenting with mixing fruits, nutrients and proteins in a blender at home. He found his concoctions began to have a big impact on his health and, in 1973, opened a health food store that sold primarily vitamins and nutritional supplements, as well as his healthful drinks.

"The smoothies were actually added a bit later, but because of their popularity, the focus of the mix was reversed," O'Keefe says. "We still offer retail products that provide the consumer with healthy snacks that they can enjoy with their smoothie, as well as nutritional supplements for use at home, but it's about an 88 percent to 12 percent relationship of revenue from smoothies to those other products."

With smoothies as the main attraction and no additional food items to prepare, Smoothie King stores are uncomplicated and ultra-efficient. Ideally, stores measure 800 to 1,600 square feet and a variety of types of real estate work well, from in-line and endcap spaces to freestanding buildings with drive-thrus, or mall kiosks and other types of nontraditional configurations.

The company is finalizing a new prototype design, which will include a new logo and new look for its website and other marketing materials. "We're in the midst of a brand identity analysis," O'Keefe says. "We've been at it for several months and are trying to get all of the elements finalized by the end of the year."

The new prototype will focus on format flexibility, opening up greater opportunities for the brand to establish itself in college and university settings, recreation centers, malls and airports.

Smoothie King's existing prototype features bright, energetic colors, large menu boards and graphics that convey nutrition- and health-oriented brand messages. Each store includes shelves of retail vitamins and supplements displayed on one side wall and the smoothie bar on the other, typically wrapping around the back wall in an L shape.

Customers place their orders at the front of the smoothie bar and then make their way to the cash
station toward the other end. In between, they pass racks of grab-and-go products — mostly snacks — merchandised for add-on and impulse sales. In most units, they can see their smoothie being blended behind the counter before paying and picking up their drinks at the far end.

Behind the counter is what O'Keefe describes as a traditional bar setup. "There's a water dispenser, a refrigerated drop-in table for fruits, the powders, the juices and ice. It ends at the blending station, which typically has three to four blenders, where the product is finished, poured and delivered to the guest. It's a small, relatively tight line," he says. "Simplicity is part of the genius of the concept. The average team member is a high school student, and it's designed for easy operations and adaptability."

While drive-thru is available in a minority of stores, going forward that may become a bigger focus. "One of the demographic profiles that we're concentrating on is the balance-seeking mom," O'Keefe says. "When we introduce a new product, we're putting an emphasis on meal replacement, especially in the breakfast daypart. Most of our stores open at 7 a.m. for breakfast, and we've found that the drive-thru offers a lot of opportunity to capture that market."

Incorporating comfortable seating into the design represents another key change to the prototype. The brand's research indicates consumers want this feature, but it's something Smoothie King's original grab-and-go-focused business model hasn't typically offered.

With new ownership at the helm, a new senior management team, new menu items hitting the market for the first time in years, a new prototype forthcoming and new approaches to franchise sales, Smoothie King is definitely in rebirth mode, says O'Keefe, who adds that the timing couldn't be better. "What we offer is such a great fit with what's prevalent in the consumer's mind today. We can meet and exceed their expectations when it comes to finding alternative, healthier fast-food offerings. We have multiple paths to growth, and there's plenty of blue sky for us out there across the board."