Meatheads: A Suburban, Family-Friendly Riff on the Better-Burger Theme

When Tom Jednorowicz left his position as chief development officer for Potbelly Sandwich Works, he set out to find an existing, up-and-coming chain to buy into as a franchisee. He spent the better part of a year trolling the industry, looking at different concepts and "kicking the tires," but never hit upon one he felt passionate enough about to invest the required time, energy and capital. 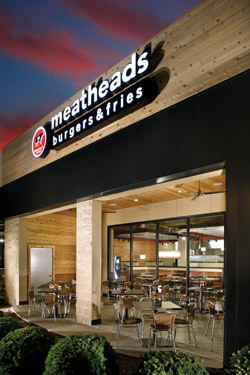 MeatheadsUltimately, he gave up the search and took the suggestion of friend and real estate developer Doug Reichl to "just open our own burger joint." That was in early 2007. Six months later the pair opened the first Meatheads Burgers & Fries, occupying what had been vacant space in a Bloomington, Ill., strip center in Reichl's portfolio. Today, the company operates 11 Meatheads units in suburban Chicago. Two additional units are in development, and another three are planned before year's end. This year Meatheads projects $17 million in revenues, up significantly from $2 million in 2009. This rapid growth landed Meatheads a space on Inc. magazine's list of fastest-growing businesses last year.

And those results came in a segment — better burgers — that Jednorowicz concedes is increasingly cluttered and competitive. "One of my favorite books is 'The Art of War.' Creating a burger concept seems directly contrary to one of the philosophies of that book, which suggests avoiding the highly competitive stuff if there are easier things to do or niches to seize," he says. "But I think from a concept-development standpoint, the broader the population base you appeal to, the more viable the opportunity."

Meatheads' momentum has come in part from heeding other key precepts from that ancient Chinese military treatise: opportunities come from openings in the environment caused by the relative weakness of the enemy in given areas; and flexibility to respond to shifting circumstances is critical to success.

"When we started, we saw the emergence of the better-burger segment on the horizon, with some of the big guys like Five Guys and Smashburger driving it," Jednorowicz says. "At the time, we were thinking along those same lines. Since then we've evolved into a much different restaurant concept . . . by doing things that the others aren't doing to differentiate ourselves."

Meatheads' menu and service model represent two of its most important differentiators. While the concept is technically fast casual and the core of the menu is burgers, the focus on ingredient quality and the diversity of offerings, as well as the style of service, go beyond what's typical of this segment.

Beyond burgers, Meatheads' menu touts Idaho russet fries cut fresh every day, cooked in 100 percent canola oil and served with any of the chain's signature dipping sauces on the side. Milkshakes — the standard chocolate, vanilla and strawberry, as well as mocha, coffee, Oreo and special limited-time-offer flavors — are hand-dipped and topped with whipped cream. Foot-long hot dogs; grilled cheese; bacon egg and cheese; BLT; and ALT (avocado, lettuce and tomato) sandwiches round out the menu. The chain recently added fresh, breaded-to-order chicken fingers due to popular demand, and Meatheads is developing salad options that will be available in a format similar to the build-your-own burgers.

Jednorowicz notes that Meatheads' menu has grown considerably from its initial iteration. Simplicity and an eye toward achieving the best operational execution drove early menus; but as the team gained experience and confidence, more options were added.

"At first, we eliminated the extras and really focused on getting down to basics on fundamental things, figuring out how to operate the business and execute well in the kitchen," he says. "Now, we have more cheeses, more toppings, more everything. I recall saying I'd never have a chicken sandwich in my restaurant — but guess what we added with our third restaurant? A chicken sandwich. So, there's been menu expansion, but it's been driven by our growing recognition of who our customer base really is, which is pretty different from who we originally thought it was going to be."

That primary customer base is families, a target that Meatheads now goes to great lengths to attract and retain, in part through a sharper focus on the dinner daypart. "Our business has evolved to be about 50/50 lunch/dinner," Jednorowicz says. "Most other concepts in the fast-casual burger segment lean much more on lunch than dinner. Lunch tends to be more of an impulse type of transaction, whereas dinner is more often destination-driven. So we worked to establish ourselves as a more of a destination-type restaurant, and that drove some of our strategic changes. Plus, we realized that we had a lot of women in our restaurants. We did some empirical data gathering and found that our clientele is around 50 percent female."

Among the company's strategic changes has been softening its look to boost its appeal to women and families. The logo, for instance, was initially large, bold, block capital letters — a decidedly masculine look that Jednorowicz says didn't accurately convey the Meatheads experience and may even have been a deterrent to some. It's now lowercase, softer and includes the mom-friendly tagline "Thoughtful food by caring people."