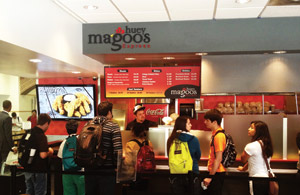 Huey MagoosThe new express concept is the third location for the emerging multi-unit operator, currently with two other locations in the Orlando area. The express location offers a more limited menu than its other, larger franchise units, in order to speed up service to 30 seconds or less. Huey Maggo's President and Co-Founder Thad Hudgens said the company plans to focus on opening more of these high-throughput, high-volume express units in heavy foot traffic areas such as college campuses, airports, and malls as well as streamline operations and simplify menu options to position itself for rapid growth. The chain plans to open an additional franchise unit later this year, with plans for extensive growth over the next three years in other mid-and large-cap markets.