In response to the rising popularity of beer within the food and beverage culture, Horseshoe Casino in Hammond, Ind., converted a wine bar into the Sixth Street Bar, a space featuring local craft brews. 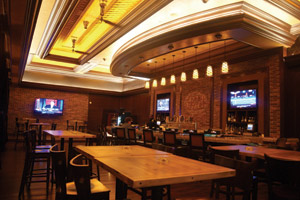 Sixth Street BarThe Sixth Street Bar's menu will alternate selections of bar top snacks and other items that pair well with beer, like cured gourmet bacon. In transforming this space, Horseshoe Casino doubled the number of beer taps to 24, converted some of the coolers at the bar to accept kegs and added some coolers to store bottled beer. To serve the selection of craft beers, staff at the Sixth Street Bar use 3 basic glasses: 16-ounce pub pints for most beers, 10-ounce snifters for specialty alcohol and beers and 10-ounce pilsners. Staff clean the taps daily and an outside vendor cleans the beer lines each month to help ensure product quality.