A commitment to treat patrons like "guests in your own home" and scratch cooking of classic comfort foods defines this New England-based upscale casual chain. 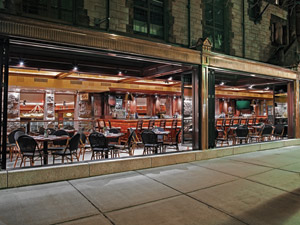 Joe's is a 14-unit up-casual dining chain with units located primarily in Massachusetts, as well as in Connecticut, Florida, New Hampshire, New Jersey and Rhode Island. In competition with many far larger and better-known concepts, the chain distinguishes itself by cooking practically everything it serves ‚Äì soups, sauces, desserts, pot pies (shells included), tortilla chips and much, much more ‚Äì from scratch.

"We don't have freezers, and we don't buy premade food," says Sean McDonald, concept chef for Joe's. "We want to be different, and different means quality. Too many restaurants will buy chowder from a vendor. It could be the best chowder made by a vendor out there, but it will be in four or five other restaurants. That doesn't make you different. You're not setting yourself apart at all. We make it fresh, and there's just a different flavor profile for fresh-made food."

This commitment has been the hallmark of Joe's since the first unit opened its doors in 1975. While most Joe's units are today owned by Tavistock Restaurants, the chain was founded by Charles Sarkis, who owned Joe's and a handful of other restaurant concepts under the umbrella of Back Bay Restaurant Group.

The story of how Tavistock came to own Joe's dates to the 2009 National Restaurant Association Show when Sarkis and his team visited the Chicago location of Zed 451, then a brand-new concept owned and operated by Tavistock. The concept, which, like Joe's, is committed to scratch cooking, had been named one of the show's "Must Sees" by an industry publication. Greeting patrons at the door that night was Tavistock CEO Bryan Lockwood.

"There was an instant connection [between Lockwood and Sarkis]. It was something that Charles would have done in his own restaurant," says Tavistock's chief marketing officer Jeff Carl.

Sarkis took a tour of Zed and was impressed by what he saw but then left to honor his reservation at another restaurant. Service at that other establishment fell far short of expectations, however. Eventually, Sarkis and his team decided to abandon their reservation and go back to Zed, where they had dinner and spent the evening discussing the restaurant business with Lockwood and other members of Tavistock's leadership.

While the story could have ended there, that night turned out to be much more than a nice dinner with new friends and colleagues. Several months later, Sarkis, with more than 40 years of operating restaurants under his belt, decided it was time to sell much of Back Bay.

"He was looking for a buyer, and he wanted someone to continue his vision, so he called Bryan. Simple as that: Who could maintain and continue the vision? Because Back Bay and Tavistock were so aligned, it made sense," says Carl.

In August 2011, Tavistock closed on the purchase of 12 Joe's units, along with a handful of other restaurants under different brands, from Back Bay. Due to leasing issues, Sarkis maintained ownership of two Joe's locations, whose operations are now fully supported by Tavistock.

Life in a Scratch Kitchen 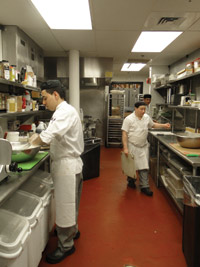 Prep work for the kitchen staff‚Äôs first shift begins once the morning‚Äôs deliveries arrive.Not surprisingly, the chain's commitment to scratch cooking ups the degree of difficulty for just about everything it does. Take deliveries, for instance. While some casual-dining chains may receive only a handful of deliveries per week, Joe's takes 15 to 17 over the same period. This includes two from their broadline distributor, three from their meat vendor, and five to six each from their fish vendor and produce vendor.

Managers begin receiving most of the deliveries starting at approximately 8 a.m. Afterward, the morning prep shift begins, and it is during this time that the chain's scratch-cooking approach becomes most obvious. Staff make the soups and sauces to serve later that day; clean and prepare greens and other vegetables for the salad station; julienne vegetables for pasta dishes; hand-cut onions for onion rings and potatoes for french fries; remove top rounds from cook-and-hold ovens and slice them for roast beef for sandwiches; patty ground beef and ground turkey for burgers; make meatballs; cook rice pilaf; boil and mash potatoes; bake desserts; hand-grate cheese for pizzas; and cut and fry tortillas for nachos ‚Äì among other tasks.

The afternoon/evening prep shift starts at 4 p.m., running until 11 p.m. During this shift, staff replenish the above ingredients as needed. Later in the evening they also begin preparing and cooking foods for the next day, most notably baby back ribs and top rounds of beef, which spend the night in the prep station's cook-and-hold ovens.

While the chain declined to provide information on labor costs or staffing, it's no stretch to think that its labor costs are somewhat higher than competitors that don't operate scratch kitchens. However, the concept offsets higher costs with dishes that can be slightly more expensive. "We're going to provide guests with the best ‚Äì the best service and the best food," says Jen Bakr, marketing manager for Joe's. "It might be, frankly, a little more in cost, but it will be worth it."

One area where the chain proudly invests in staffing is its chefs. Unlike many other casual-dining concepts, each Joe's location has its own dedicated executive chef and sous chef, who bear responsibility for the quality of the dishes that are made in their kitchens.

In addition, Joe's tasks these chefs with finding the type of people who possess the dedication and skill it takes to work in a scratch-cooking operation, McDonald says. When interviewing for kitchen staff positions, applicants must show they know the basics of cooking by, for instance, answering questions about how many cups are in a quart and how many quarts are in a gallon. If they have that knowledge and if they show passion for their work, they have a good chance of being hired.

But even with this screening process, not every new kitchen staff member works out, McDonald says. "You may hire 10 people, and maybe only 4 will actually take to a kitchen like ours. They're not used to the amount of prep, the amount of labor that goes into each item. When we hire from other restaurants in our market, some [of those hires] will look at us like, 'We've got to make the chowder? We can't just heat it up?' So, that's something that's difficult, finding people that have a true passion for what we do."

The Back of the House

Despite the amount of prep work Joe's scratch-cooking approach requires, the prep station in a typical Joe's kitchen isn't notably larger than that of its peers. "Space is money," McDonald says. "Prep departments don't generate sales, so you have to keep them efficient."

The efficient use of space doesn't mean Joe's skimps on the E&S, though. Making a scratch kitchen successful requires supplying staff with the tools to succeed, McDonald explains. This starts with clear written recipes and all the tools necessary to execute those recipes, such as plenty of measuring spoons and cups; the proper smallwares for stirring soups, cutting vegetables and so on; and properly sized, well-maintained cooking equipment.

The heart of the prep station features between two and four (depending on the unit, kitchen size and layout) six-foot worktables. Here, the cold prep team chops onions for onion rings, cuts potatoes for french fries and handles other cold prep work. Another prep team handles salad prep for the day, washing and chopping vegetables and other ingredients. The third prep post handles hot items. Using a tilt skillet, a 6-burner range and an oven, the hot prep team makes the day's soups (the previously mentioned chowder, for example, has 18 ingredients and takes a 4 hours to fully prepare and cook), and in the evening places ribs and top rounds in the station's cook-and-hold ovens, which are removed and further prepped in the morning.

The actual cooking line contains four stations, all of which patrons can see thanks to Joe's display-kitchen format.

The first is the grill and broil stations, where kitchen staff cook all the steaks, burgers and chicken breasts. In addition to a broiler and open-top grill, the unit uses a cook-and-hold oven for keeping warm the rotisserie chicken, baby back ribs and other items cooked earlier in the day (or the night before). The station also features a chef's table with refrigerated drawers below for holding proteins and a cold rail on top with cheeses, lettuce and other items used to complete dishes like burgers and chicken sandwiches.