A just-in-time inventory system, supporting local compost programs and strict controls for produce purchasing and handling are among the practices allowing this growing chain to minimize waste and focus on maintaining high-quality menu items. 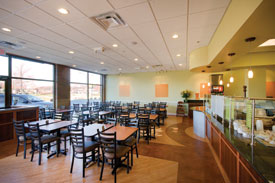 Wood tables and comfortable chairs give a warm, inviting ambiance to the seating area. Customers can see the salad assembly area from anywhere in the unit.Growing up in a family that owned a grocery store, John Bornoty became familiar with retail businesses at an early age. "Once it is in your blood, you can't easily get away from it," he says. In early adulthood, after working in the entertainment industry, he ventured into the computer business, founding Netgroup Inc., an Internet solutions provider; later, he founded the Interactive Media Broadcasting Company. In 2004, Bornoty exited the technology business.

During the next year, while having lunch at a New York City deli and considering his next business move, Bornoty had an epiphany. "I saw a small yet busy salad bar in a corner of the room where customers were building their own salads as a healthier alternative to a mile-high pastrami on rye," Bornoty says. "Just like many people who offer salad bars, the owners weren't doing this well. The lettuce wasn't always fresh, the toppings were limited and customers were all handling the same utensils, awkwardly reaching beneath a glass or clear plastic panel. The ingredients were not replenished until they were empty and were staying warm and wilted.

"I thought, why not develop a concept that features 'salad chefs' making main course salads for customers with fresh and plentiful amounts of ingredients in a relaxed setting," he continues. "And, I was interested in the practice of franchising. So it all came together into what I felt was a viable concept."

For the next two years, Bornoty and his wife, Elizabeth, mapped out a business strategy for a fast-casual restaurant chain. The Big Salad's first location opened in 2008 in Grosse Pointe Woods, Mich. Set in an upscale environment with granite counters, wood accents and comfortable, cushioned wood chairs, the unit was well received by diners seeking fresh food at reasonable prices.

Despite all their efforts to put together the perfect concept, the Bornotys confronted circumstances that put their concept in jeopardy. "We opened in 2008, in September, during one of the world's worst financial periods, so customers were very concerned about costs," he says. "Then, despite all the careful planning to calculate risks and put all the right systems in place, we still got certain things wrong. Until you're actually doing it, you don't know what you've missed, like the optimal size of the units, where to put trays and take-out for optimal traffic flow, and we didn't have sandwiches on the menu."

By 2010, the Bornotys had worked through the mistakes and opened a unit in Troy, Mich., the second corporate location. "What a difference the time made," Bornoty says. "We got it right this time!"

Since then, the Bornotys have sold a franchise in Royal Oak, Mich., sold the Troy location to a franchisee and opened another company store in 2012 in Novi, Mich. A pair of Michigan franchised locations are scheduled to open in the spring of 2013 – one each in Ann Arbor and Rochester – and plans are on the books to open 200 units within the next 10 years. Endcaps in shopping centers with complementary restaurants represent the chain's ideal location.

In growing the chain, Bornoty wants to maintain a ratio of 25 percent to 75 percent company-owned to franchised units. "If we have too many corporate stores, we won't have enough time to support our franchisees," he says. "But corporate stores are more profitable, and we have more control. We believe anyone working in the corporate office or stores should know a lot about running a restaurant and understanding customers before making decisions or trying to support a franchisee. So, everyone working in our corporate office must work an eight-hour shift at a store twice a month."

Training programs also are mandatory and extensive. Before working at a location, employees must train for 15 days. "They don't even talk to customers for 10 days," Bornoty says. "They start in the dishroom and then cross-train so they have respect for others and their jobs. Businesses that mess up have presidents and high-level managers who aren't in touch with customers. I believe that the higher up you go, the more hats you wear and the more you must understand each position. I believe in respect, which is why 50 percent of those who leave us for personal reasons come back."

The initial location in Grosse Pointe Woods measured 1,200 square feet, but having learned some valuable lessons about unit size, the chain's subsequent units now feature configurations measuring 1,800 to 2,300 square feet with seating for 42 to 50 customers.

Staying focused on a menu mix that staff can execute well also figures into The Big Salad's growth strategy. "We're redefining the concept of salad and the mixture of ingredients that can be combined," Bornoty says. "The same ingredients can be put between bread into a sandwich, so it makes sense to add sandwiches to the menu." Sandwiches now comprise 25 percent of sales.

With John Bornoty's retail and computer background and Elizabeth's background as a math teacher, it's little wonder that technology and management systems are integral to the chain's success.