After four years of "quiet mode" growth, MOD Pizza, the Seattle-based, fast-casual chain known for its customizable, artisanal pizzas, has rapidly expanded throughout the Pacific Northwest. Stores seven and eight opened in Redmond and Sammamish, Wash., and the chain plans to expand outside the state in 2013. 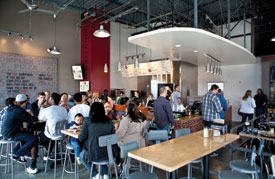 MOD PizzaThe MOD Pizza concept was founded in 2007 by husband-and-wife team Ally and Scott Svenson who sold their coffee business in the U.K., Seattle Coffee Company, to Starbucks in 1998. Michael Klebeck, co-founder of Top Pot Doughnuts, played a strong role in developing the MOD brand in its early stages, while Chris Schultz, director of operations and a 10-year veteran of Starbucks, runs MOD's day-to-day operations, which employs more than 140 people.

MOD, which stands for "made on demand," offers individual thin-crust pizzas cooked in less than 5 minutes using 800 degree F, gas-fired display ovens. The pizzas boast handmade dough and red sauce made fresh daily. Customers can create their own pizzas, choosing from more than 28 toppings, or select from a menu with featured offerings such as the Caspian (mozzarella, gorgonzola, barbeque chicken, barbeque sauce, sliced red onions) and Lucy Sunshine (mozzarella, parmesan, artichokes, garlic, with dollops of MOD's signature red sauce). MOD also offers a variety of salads and pizza knots, along with draft micro-beers, wine and milkshakes. The store's funky interior design prevents a chain feel, and retro music plays throughout the interior and the patio at each store.